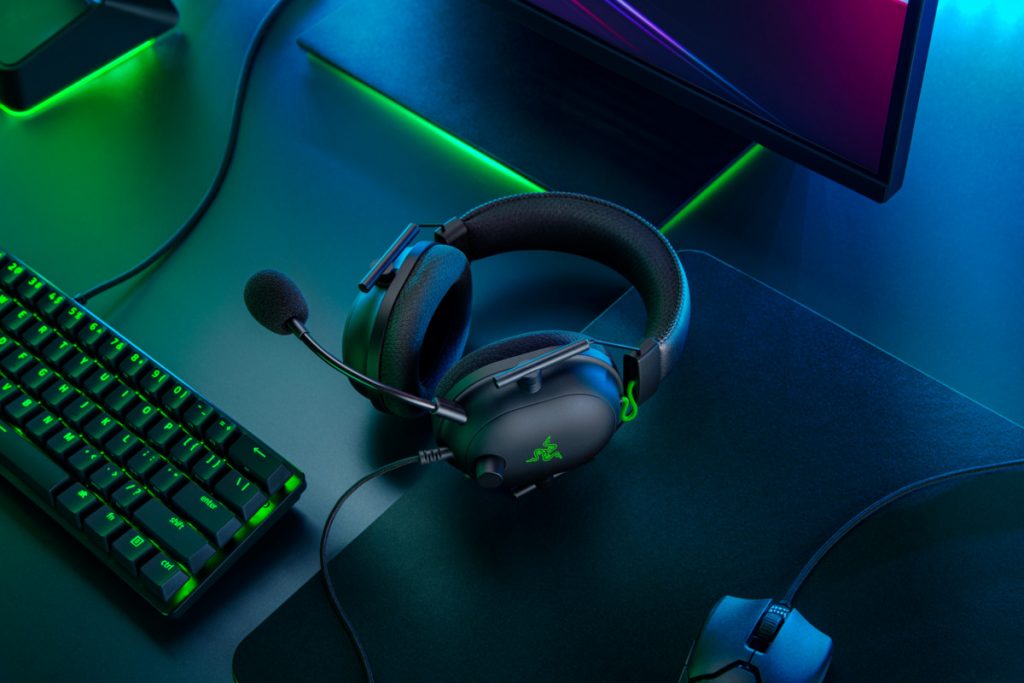 Hands on with the THX-powered Razer BlackShark V2 gaming headset

Razer on Thursday announced the next version of its venerable BlackShark gaming headset, the BlackShark V2, leveraging a partnership with THX to provide spatial-audio profiles for gaming using positional sound.

The $100 wired headset can be used as a “standalone” wired headset via its 3.5mm jack. But the V2 also ships with a USB soundcard that the headset can plug into, which adds additional filtering capabilities to the headset’s built-in mic. A second, $60 budget option, the Razer BlackShark V2 X, does away with the sound card but provides a similar driver and the same mic as the more expensive version.

Both headsets ship today, though Razer won’t be able to provide the THX spatial-audio profiles until August 6, the company said. On that day, you’ll be able to download specific profiles for eighteen games, such as Valorant, Apex Legends, Counter-Strike: Global Offensive, and more.

As you might expect, controls for most of the headset’s functions can be adjusted using the Razer Synapse utility software. A new version of Synapse will add the THX gaming profiles, Razer said.

For competing devices, check out our roundup of the best gaming headsets.

Hands on with the Razer BlackShark V2

Razer provided a review sample of both headsets to PCWorld. While we’re not ready to provide a full review, we’ve tried it out enough to provide our early impressions. (Keep in mind that while the BlackShark V2’s 3.5mm jack allows it to be used with phones, Xbox controllers, and more, the pluggable USB soundcard is designed for Windows PCs only.)

My first thoughts when the cans hit my ears were: soft…and light.

Both headsets are built around what Razer calls an entirely new 50mm TriForce Titanium audio driver, enclosed by what the company also calls an advanced passive noise-cancelling design. In the real world, all that means is that the BlackShark V2 offers a substantial amount of padding to enclose and cradle your ear while blocking out ambient sounds. And it did so, filtering out some of the ambient noise from my office fans, and some of the shrieks as my two young boys rampaged through the house.

My go-to headset is an HP Omen-branded headset manufactured by Steelseries, which isn’t quite as cozy and offers none of Razer’s audio tricks. Razer’s BlackShark V2 weighs in at 262g (0.6 pound), about half the weight of my existing headset. I’ve never experienced headset fatigue from prolonged use, but lighter weight generally translates into greater comfort. Like most headsets, the BlackShark V2’s mic isn’t retractable and simply needs to be pushed out of the way when not in use.

It took far too long to tune the BlackShark V2 to my preferences, though I was happy with the result. Part of this is simply Razer’s Synapse software, which allows synchronizing the headset with other Razer products; I actually own both a (left-handed!) DeathAdder mouse as well as a BlackWidow keyboard, and I have absolutely no desire to sync all three. The Synapse software has four separate audio tabs: Sound, Mixer, Enhancement, and Mic, with multiple options at each step.

Even worse, the “master” volume on the sound tab is apparently independent of the general Windows volume option as well as a dedicated hardware dial on the headset itself. This is only worth mentioning because I was convinced that the BlackShark V2 was underpowered until I found and adjusted all three controls. Did we mention that there are Windows controls for the “Razer USB Sound Card” and the THX Spatial Audio speakers?

How did they end up sounding? Very good, in the end. It’s always rewarding to play Fleetwood Mac’s “The Chain” and discover that yes, John McVie’s bass line does appear in the song. My old-school rock ears lit up when the thudding bass of Queen’s “Another One Bites the Dust” hit my ears, too. Not surprisingly, there’s a graphics equalizer hidden away within the Synapse software, with a “music” preset. I may not have a perfect ear, but the BlackShark delivered good tonality up and down the scale.

I’m still not a huge fan of the THX enhancement software, though, as the music preset seems to garble it all together more than it helps. That’s not true of its THX Spatial Audio capabilities, however, as the algorithm and the headset combined seem to position the sound pretty well. (My ears heard the THX “helicopter” circling “above” my head, though, which may be deliberate.) I didn’t specifically test the positional audio using an evaluation copy of the updated Synapse software against the specific games Razer provided, but it did a decent job of positioning the audio with other games already on my system. Eventually, those profiles will include THX Environmental Mode for lifelike sound, or THX Competitive Mode, with more emphasis on spatial awareness and directional cues.

I’m not as impressed with the BlackShark V2’s mic. I don’t usually wear a headset or even earbuds during Zoom calls, because the far-field mics on the Microsoft Surface Book 3 2-in-1 seem to capture my voice well. In a quiet office, Microsoft’s mics warmly capture my voice. (I used Windows’ own Voice Recorder to generate test files.)

The BlackShark V2 can’t quite manage it. Even playing with the numerous options the sound card enables, from volume normalization to a “vocal clarity” setting that enhances the frequencies your voice uses, I was never able to quite reproduce what the Book 3 or the SteelSeries headset delivered. There’s even a mic equalizer, though (with “broadcast” and “conferencing” presets), so some more fine-tuning may have been necessary.

The V2, though, does an excellent job of filtering out unwanted noise. Even during basic tests, such as placing a smart speaker around to the side and behind me, I was able to speak and be heard quite clearly, with just faint background noise. I don’t have many other headsets to compare it to, but I was more than pleased with the BlackShark V2 in this regard.

Does the BlackShark V2 offer gamers “an unfair advantage,” enabling them to hear their enemies coming from miles away? I can’t say for certain. In the run-and-gun environment of Apex Legends, audio cues may not be as critical as, say, Player Unknown’s Battlegrounds. My early impressions tell me that you may want to lean toward the V2X instead.