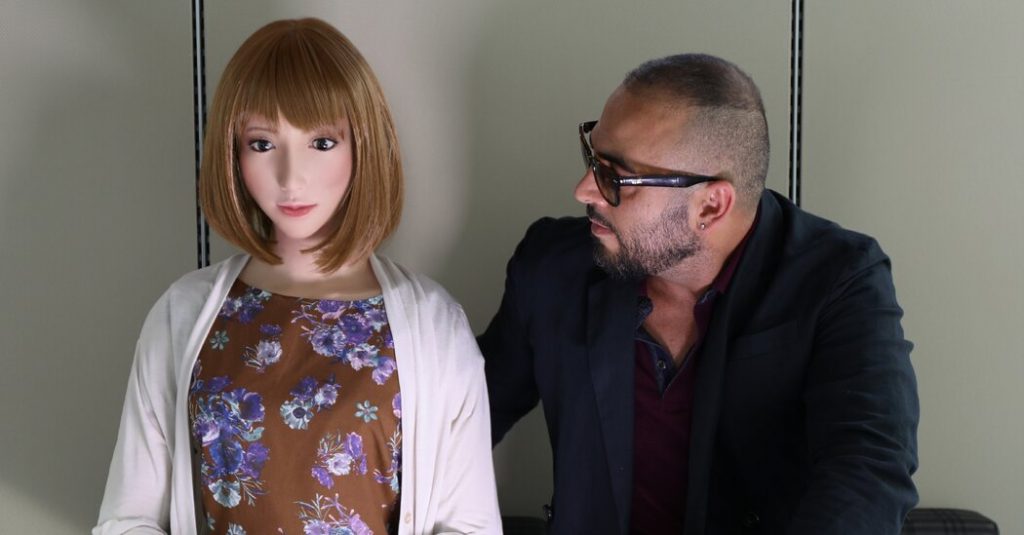 “She’d ask questions like, ‘Why am I saying this line more loudly or more softly?’” Helderman said. “Or, ‘Why am I doing this thing when the camera is there, but not when it isn’t?’”

Their biggest challenge, he said, was hardly memorization — she immediately mastered her lines. But it took her months to grasp the concept of not just reciting a line, but speaking it softly or in full voice depending on the context, and bolstering the words with body language. Khoze said they taught her the dialogue for a scene in one session, then worked on the emotions, character development and body language in another.

Of course, there are limits to her capabilities: She cannot improvise. Well, she can, within limits, Helderman clarifies, it just wouldn’t be nearly as clean a performance as a practiced sequence.

And unlike a human actor, she’ll have to convince the audience not to reject her as creepy or repulsive.

The Japanese roboticist Masahiro Mori proposed a theory in 1970 known as the “uncanny valley,” which says that the more humanlike a robot appears, the more positively humans will react to it — but only to a point. If the resemblance is too strong, the robot can trigger a sense of revulsion or eeriness. It’s still unclear exactly what triggers the uncanny valley, said Karl MacDorman, an associate professor of human-computer interaction at Indiana University-Purdue University Indianapolis: factors might include facial and body proportions, the pace and naturalness of speech, and the fluidity or jerkiness of movement.

He said that lack of sympathy in the face of adversity can be a plus for uncanny computer-animated or robotic villains like Gollum from “Lord of the Rings,” using viewers’ unsettledness to their advantage. “You’re not supposed to relate to or feel empathy for Gollum — though sometimes, we do,” he said. “But when we can’t relate to a protagonist we’re supposed to want to succeed, that’s where the uncanny valley can become disruptive.”