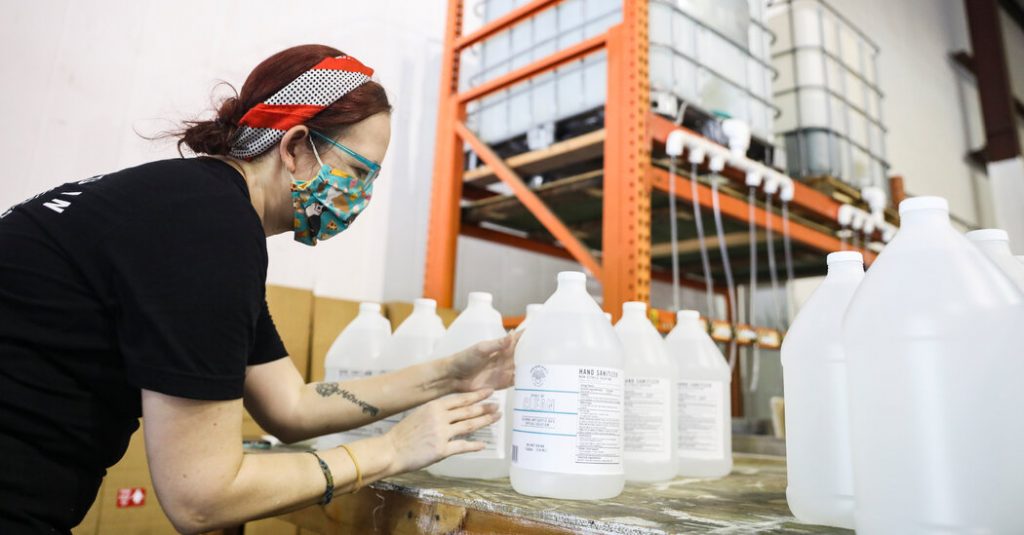 As the coronavirus pandemic shuttered bars and restaurants in March, Phil McDaniel’s craft distillery in St. Augustine, Fla., stopped producing bourbon. Then he realized there was one alcohol-based product he could make that people would still clamor for: hand sanitizer.

His St. Augustine Distillery soon churned out the first of what became 10,000 gallons of the disinfectant. With sanitizer in short supply nationwide, he quickly sold and donated most of the supplies to hospitals and emergency responders along Florida’s northeastern coast.

“In the beginning, it was just unbelievable, the sort of frenetic demand that was out there,” said Mr. McDaniel, 62. “It was so gratifying to us to be able to come in and help.”

But as virus cases have spiked again in Florida and other states, Mr. McDaniel said he had no plans to make more sanitizer. That’s because the early demand he experienced tailed off in June when large brands like Purell were able to pump out more product. The price for sanitizer, which had hovered at $50 a gallon, plunged to around $15 a gallon. Today, he still has about 1,000 gallons of it, spread between 250-gallon square totes of finished product and 50-gallon drums of ingredients, sitting in a warehouse.

Mr. McDaniel is one of more than 800 craft distillers across the United States who leapt into action to help in the first wave of the pandemic, urged on by federal agencies, but who are now hesitant to invest more time and money into those efforts. With demand for sanitizer fluctuating, distillers have faced unforeseen costs and excess supplies that they could not get rid of.

At the same time, the economics of the $3.2 billion craft beverage industry have deteriorated. Craft distilleries are often fragile, mom-and-pop operations with fewer than a dozen employees and their owners’ life savings invested in the business. Now battered by months of lost liquor sales, many cannot afford to spend more on making sanitizer when all they really want to do is get back to making whiskey to survive.

Their conundrum shows how life has become more complicated as the pandemic has persisted. What had been a no-brainer good Samaritan decision to help local communities and nurture a new business has instead devolved into a messy financial calculus as the hardships of the crisis continue piling up.

“It feels a little bit like no good deed is going unpunished right now,” said Spencer Whelan, the director of the Texas Whiskey Association, a trade group representing some of the state’s distillers.

The hand sanitizer industry has long been dominated by large companies like Clorox and Gojo Industries, the maker of Purell. As registered drug manufacturers, they are subject to rigorous Food and Drug Administration inspections and reviews that allow them to produce the disinfectant.

But the market was shaken up in March when hand sanitizer became scarce after being snapped up by hospitals, emergency medical workers and profiteers. That month, the F.D.A. and the Alcohol and Tobacco Tax and Trade Bureau issued temporary guidance allowing businesses to start making sanitizer without needing to undergo the typical inspections and oversight.

For distillers, it turned out that making hand sanitizer was fairly straightforward. They already had the distilled spirits permits needed to handle ethanol, the type of alcohol used both for liquor and as a sanitizer ingredient. They also had the tanks, blending and bottling equipment necessary for production.

The prospect of replacing liquor revenue with sanitizer sales piqued the interest of Jonathan Eagan, a co-owner of the Arizona Distilling Company in Tempe, Ariz. He spent $50,000 on alcohol to produce the disinfectant in the spring, and said he quickly sold enough of it to make up for two months in lost liquor sales.

That money was crucial, given that bars, restaurants and tours — the distillers’ main sources of income — were hobbled. In an April survey of 118 distilleries in 35 states by the Distilled Spirits Council, an advocacy organization, respondents said 43 percent of their employees had been laid off and sales had plummeted 64 percent. Two-thirds said they didn’t expect to be able to stay open in another six months.

But even as distillers ramped up sanitizer production, that lifeline also started petering out. As panic-buying of the disinfectant leveled off and production among larger companies stabilized, “the business just kind of dried up” in the last few weeks, said Mr. Eagan.

Now as Arizona deals with new virus cases, much of his remaining 1,000 gallons of sanitizer has sat idle. He blamed the changing demand on the “vacillating” by officials over the pandemic’s severity and their “flip-flopping” over which businesses could reopen — and stay open.

To help distillers, advocacy groups like the Distilled Spirits Council have lobbied Congress to provide economic relief. They also want the F.D.A. to specify how long it will allow sanitizer production by distillers to continue, to give the businesses some certainty.

Some states, like California and many of those in New England, have also temporarily suspended laws that prohibit distilleries from directly shipping alcohol to consumers. In states where those rules haven’t been changed, some distillers said their willingness to make and donate hand sanitizer during a crisis merited a reprieve from the shipping restrictions.

Distillers “have absolutely done their civic duty,” said Mr. McDaniel, who is also president of the Florida Distillers’ Guild, an advocacy group. Now “they’re all on life support.”

For some distilleries weighing whether to continue sanitizer production, the decision was easy: no way.

Barry Butler, the owner of Tarpon Springs Distillery in Tarpon Springs, Fla., had teamed up with a nearby rum distillery to give away about 15,000 gallons of sanitizer and had made $40,000 by selling 10,000 gallons more. But when demand plummeted in June, he returned to producing moonshine and ouzo, a Greek liquor.

“It kept the lights on, it kept the guys working and employed when we were shut down for tours and tasting,” Mr. Butler said of making sanitizer. But “as a long-term economic solution for a distillery, it’s not a way to make money.”

Mr. Butler said he dealt with equipment problems, too. The F.D.A.’s sanitizer guidelines require distillers to add a bittering agent like the compound Bitrix to ensure people don’t try to drink the finished product.

Bitrix is so strong, Mr. Butler said, that any distillery equipment used to make sanitizer was ruined. “Anything you use for that is now dead forever,” he said, adding that he threw away stainless steel bottling hoses that had been contaminated.

Not all distillers have given up on sanitizer. Matt Allen, co-owner of Dark Door Spirits in Tampa, said he also began making sanitizer in the spring and has sold and given away at least 20,000 gallons to eight cities, 16 counties, the Federal Aviation Administration and the Postal Service.

When demand declined, he began working to lock in contracts with local hospitals to buy a guaranteed amount of product going forward.

“We just need some sort of gauge of long-term commitment,” Mr. Allen said.

Mr. McDaniel’s St. Augustine Distillery, which opened in 2014, is known for its Florida cane vodka, rum made from Florida molasses and a variety of bourbons, which are aged for three or more years. One of the state’s larger craft distilleries, it has attracted tens of thousands of tourists every year to its headquarters, which once housed an ice manufacturing plant.

The business, which initially lost money, has been profitable since the bourbon finished aging nearly four years ago, Mr. McDaniel said. But when the pandemic hit, the packed tasting room and tours became just a memory. In April, Mr. McDaniel slashed advertising and furloughed about 15 of his more than 45 employees.

Mr. McDaniel said his sanitizer made enough to cover the cost of what he donated and a little more. In June, when demand dropped off, he stopped making it.

St. Augustine Distillery is now producing bourbon again — but it is seeing only half its normal amount of liquor sales.

“At the end of the day, our core business is making really great alcohol,” Mr. McDaniel said. “To be able to get back to business and have demand for that and to sell it profitably is what we’re all looking for right now.”