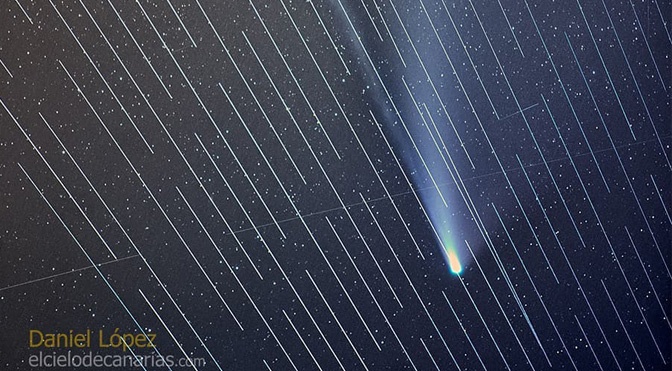 Earlier this year, NASA discovered a new comet with its Wide-field Infrared Survey Explorer (WISE) space telescope. The object, casually known as NEOWISE, has been closer to Earth this month than at any point in the last 6,000 years. Astronomers and photographers have been looking skyward to observe the comet, but one astrophotographer got a nasty surprise when Starlink satellites photobombed an otherwise excellent time-lapse photo.

NEOWISE is what’s known as a long period comet — it has a highly eccentric orbit that takes it deep into the outer solar system over thousands of years before it swings back toward the sun (and Earth). Astronomers believe the nucleus of NEOWISE is roughly three miles (5 kilometers) in diameter. For most of July, the comet has been less than 200 million miles from Earth, which is close enough to see with the naked eye in isolated areas. In urban settings, you need binoculars or a telescope to spot the comet.

Astrophotographer Daniel Lopez recently set up his equipment in Teide National Park on the Canary Islands to snap a time-lapse image of NEOWISE. The final image, which features 17 separate frames captured over 30 seconds is marred by streaks of light from SpaceX’s Starlink internet satellites.

VisorSat is supposed to stop exactly this sort of thing from happening. If it works.

Elon Musk dreams of providing satellite internet access around the world with this mega-constellation of satellites. There are already more than 500 of them in orbit, but the company’s plans call for thousands. To avoid the horrendous lag endemic in previous satellite internet systems, Starlink satellites remain in lower orbits. That also makes them more visible. For example, Starlink satellites ruined observations of the Magellanic Clouds at the CTIO observatory in Chile.

17 30-second images of the comet added up by @cielodecanarias, completely photobombed by @elonmusk‘s #Starlink satellites. It’s a few hundreds of them right now,there will be a few thousands in the near future. @SpaceX is committed to coating orienting them better but still…. pic.twitter.com/TYtTf5xwhc

SpaceX has promised to address the high reflectivity of its satellite network with a system called VisorSat—essentially, fins that shield the shiny surface of the satellites from sunlight. SpaceX began testing VisorSat on satellites launched in April, but it’s unclear how well they work, and regardless, SpaceX is launching new satellites every few weeks. If VisorSat isn’t perfect, there could be a lot more ruined photos in the future. Musk claims that Starlink won’t have a substantial impact on astronomy even when there are thousands of satellites. Although, he does have a tendency to overpromise.