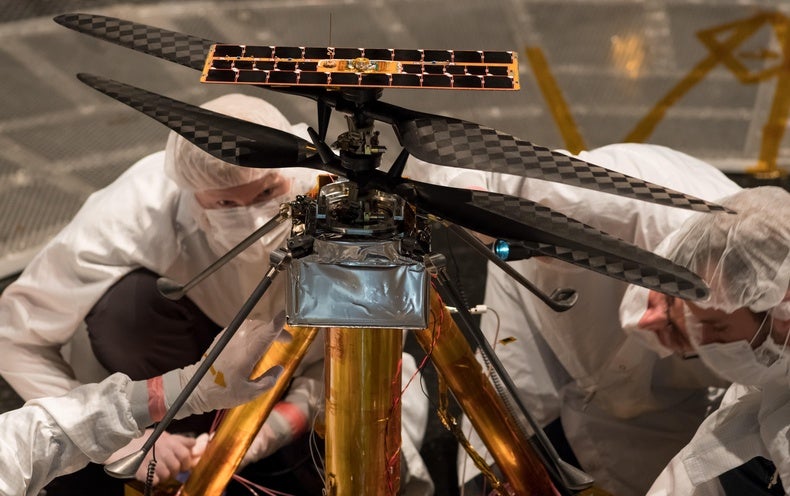 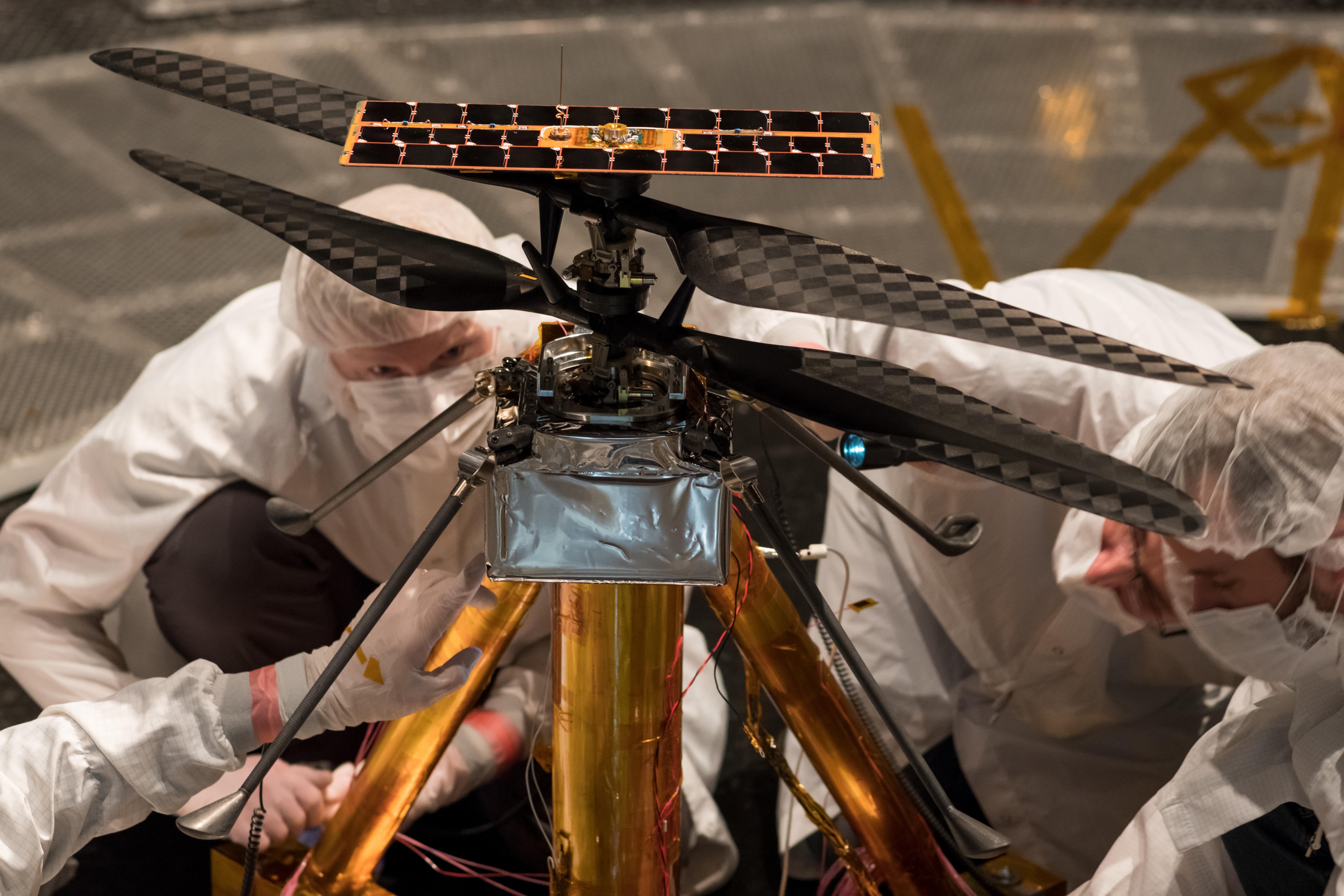 The SUV-sized Perseverance rover due to launch to Mars this week has a sidekick: a svelte four-pound helicopter with four-foot-long rotor blades that weigh as light as feathers. It will attempt to make the first powered flight on another planet, a potential game-changer for deep-space exploration.

If all goes as planned, dispatching the helicopter from Perseverance’s belly will be an early first step for the Mars 2020 mission after the rover’s parachute, retro-rocket and sky crane descend onto the flat floor of the planet’s Jezero Crater in early 2021. Intended solely as a technology demonstration, the rotorcraft, named Ingenuity, will attempt up to five powered flights in the thin Martian air, which is less than 1 percent the density of Earth’s atmosphere.

These trips will be quick, each lasting about 90 seconds from takeoff to landing, which is all the time available before Ingenuity’s batteries drain. To push enough air downward to create upward lift, its blades have to spin at about 2,800 revolutions per minute—10 times faster than helicopters on Earth—so each flight will consume about 350 watts of power. Ingenuity’s solar-powered batteries will take a full Martian day (a little longer than an Earth day) to recharge between flights. The craft’s peak altitude will be only about 16 feet, but the conditions it will face will be comparable to those experienced at 100,000 feet on Earth—more than twice as high as any helicopter has flown.

Planning for the Mars helicopter began more than six years ago at NASA’s Jet Propulsion Laboratory’s (JPL’s) autonomous systems division, which studies next-generation capabilities for space exploration. The team, headed by engineer MiMi Aung, was challenged to create a flying vehicle that would work on the Red Planet.

If successful, an aircraft could carry scientific instruments to places where rovers and landers cannot go, such as exposed ice scarps on the sides of cliffs or inside the walls of steep craters. The aircraft could loft cameras to scout locations for future rovers—and, one day, astronauts—to explore. Doing so would provide far more detailed pictures than what is available via current orbital imagery, which can resolve features on Mars down to about three feet or so. “Imagine having centimeter-level- precision, [or about half-inch-precision], images of possible destinations and characterizing those,” Aung says.

Future concepts include swarms of craft that fly together and work cooperatively or a larger flight vehicle that could independently travel from location to location, enabling a new type of otherworldly exploration. JPL is studying potential Mars helicopters weighing up to to 33 pounds that could carry a payload up to about 3.3 pounds. NASA also is funding a far more ambitious helicopter-based mission called Dragonfly to explore the rich organic chemistry on Saturn’s largest moon Titan. The natural satellite has a thick atmosphere and lakes and seas of liquid methane beneath its thick hydrocarbon atmosphere, as well as a watery underground ocean, making it a tantalizing world in the search for life beyond Earth.

“What’s really changed in the last several years is the drone revolution—just how much development there has been in drone and autonomous flight technology,” says planetary scientist Elizabeth Turtle, Dragonfly’s principal investigator at the Johns Hopkins University Applied Physics Laboratory. “When we were looking at mission architectures that made sense to propose to explore Titan, we realized that we really now had all of this capability.”

First, though, powered flight on Mars must be proved possible. And doing so is the sole goal of the $85-million Ingenuity mission.

The helicopter is a bit bigger than a softball, minus its four carbon-fiber blades, which spin on two counterrotating rotors and sits on four legs, each 15 inches long. It carries diminutive avionics and communications equipment, a navigation camera, a single solar panel and rechargeable lithium-ion batteries—as well as heaters to keep the electronics warm through the frigid Martian nights. There are no science instruments onboard; just a high-resolution color imager.

Designing the helicopter required innovation across every domain of aerospace engineering—thermal, mechanical, structural, power, materials, and so on. “We had to remove all the boundaries,” Aung says. “We’re used to having our own chassis … and our own computer for each subsystem. Integrating all of that together, and then combining, also, the aero aspect of it, pulling the whole system together in such a light weight…, was the first challenge. That’s what also made it really fun and interesting.”

Ingenuity will ride to Mars attached to the Perseverance rover and behind a shield to protect it from debris that may be kicked up during the sky crane’s descent to the planet’s surface. The launch is scheduled for 7:50–9:50 A.M. EDT on July 30 at Cape Canaveral Air Force Station in Florida. Perseverance is expected to land on Mars on February 18, 2021.

As the rover begins beaming back data that will allow scientists to assess Jezero Crater, the landing site for NASA’s fifth and most ambitious Mars rover, Aung and her team will scout for a flat 33-by-33-foot site to become the experimental airfield for Ingenuity’s test flights, which are scheduled to begin in May.

Ingenuity will not be the first spacecraft to soar through another planet’s atmosphere. That distinction falls to a pair of balloons that traversed the skies of Venus in 1985, collecting weather data as part of the Soviet-era Vega missions. But Ingenuity will attempt the first powered flight on another world, a Wright Brothers moment for the 21st century.

After dropping off the helicopter, Perseverance will retreat at least 100 yards away—far enough to avoid being hit in case Ingenuity crashes but still sufficiently close for radio communications. Its maximum of five flights will take place within a 30-Martian-day span, after which the rover will turn to its primary mission: assessing the habitability of Jezero Crater and caching samples of rocks and soils that may contain microfossils or other evidence of past microbial life.

During the final test, Ingenuity could fly up to 150 feet away, perhaps reaching its modest maximum altitude before returning to its takeoff point. “Because this is a pathfinder, we don’t have a hazard-detection-and-avoidance system,” Aung says. “That would be essential for future helicopters, because right before you land, you would want a three-dimensional, digital elevation map to be able to divert away and avoid any hazard.”

The most important flight test on Mars will be the first, which will replicate ones previously conducted inside a 25-foot diameter vacuum chamber at JPL. “We take off, hover, do a modest lateral flight, come back and land,” Aung says. “It’s extremely important, because it confirms all our models—all the tests that we’ve done on Earth.”

After that trip, Ingenuity’s flights should get a little bolder, with the rotorcraft traveling higher and then laterally farther before returning to land. “There’s a saying in the aviation community that the only thing more exciting than taking off in your own aircraft is landing it again,” says Håvard Grip, Ingenuity’s lead pilot. “I think that’s the case here.”

Ingenuity is one of three technology demonstrations planned for the Mars 2020 mission. The second is an autonomous hazard-avoidance navigation system that Perseverance will use during its descent to the 28-mile wide Jezero Crater. And the third is an instrument called the Mars Oxygen In-Situ Resource Utilization Experiment (MOXIE), which will attempt to convert carbon dioxide pulled from the atmosphere into oxygen, a resource for potential future human missions to Mars.