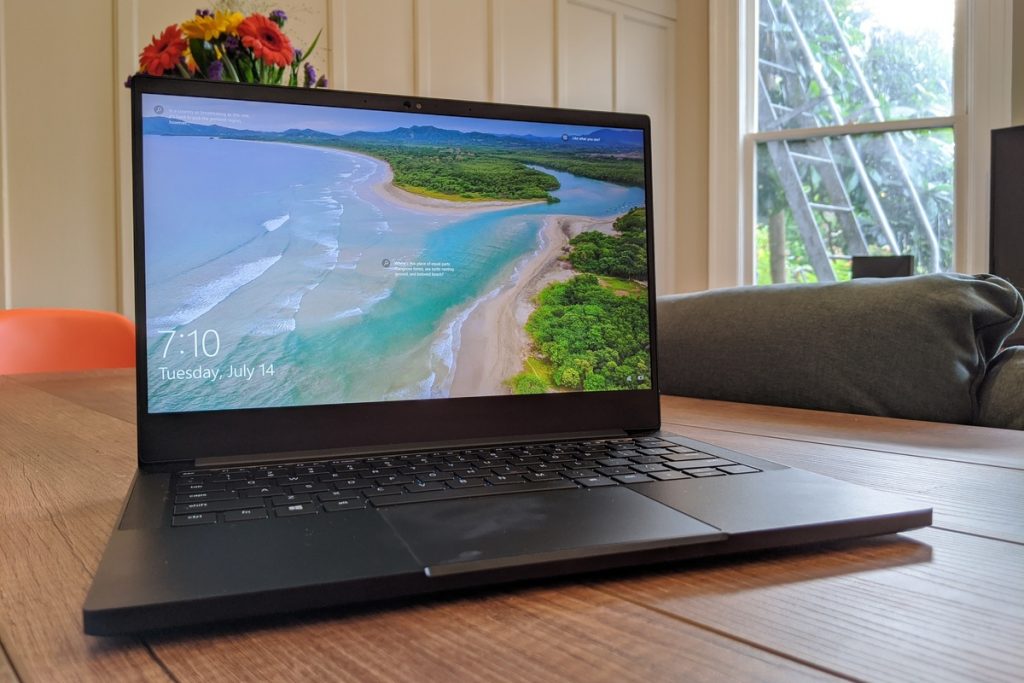 Razer just can’t quit video games. The Blade Stealth was its exit strategy—or so I thought. Released in 2016, the Stealth was Razer’s debut Ultrabook, and brought the larger Blade’s sleek, MacBook-like aesthetics and build quality to people who just check their email and type up memos, or whatever. I fell in love.

But with each new iteration, Razer’s strayed further and further from the ideals of that initial Stealth. The 2018 Blade Stealth ditched the vaunted $999 price point for a more premium experience. And for 2020? Razer’s billing the latest Stealth as the “first gaming Ultrabook.” With its discrete graphics card and 13-inch, 300Hz display, it’s basically a very small gaming laptop.

There are three Razer Blade Stealth models for 2020. They differ only in terms of the display, not the internals. All three feature the same Intel Core i7-1065G7 processor, the same Nvidia GeForce GTX 1650 Ti Max-Q graphics card, 16GB of RAM, and a 512GB SSD.

All you need to decide is whether to spring for a high-end display. The base model lists for $1,700 from AmazonRemove non-product link and features a standard 13-inch, Full HD (1920×1080) display clocked at 60Hz. Our review unit is the next model up ($1,800 on Amazon), which provides a 120Hz display for smoother gameplay. The top-tier model ($1,999 on AmazonRemove non-product link) features a 4K touch panel at 60Hz. There’s not much of a price difference among the three, nor will the average user see much of a difference among the displays.

Honestly, in this case the cheapest option might be your best bet. Both the 4K and 120Hz displays will put a dent in the Blade Stealth’s battery life, and for little reason. The 4K resolution is almost overkill for a display this small. While I love a 120Hz (or higher) monitor for my desktop machine, the GTX 1650 Ti won’t be hitting those frame rates often in-game. It makes day-to-day use feel a bit smoother, but not substantially so. We’ll discuss further, as we received the 120Hz unit for review.

Razer’s knack for miniaturization shouldn’t surprise me by now, and yet it still does. The 2020 Blade Stealth isn’t quite as small as its predecessor, but it’s close, at 11.9 x 8.2 x 0.6 inches. That 0.6-inch height is particularly impressive, just slightly thicker than the 2018 model—except now there’s a dedicated graphics card inside.

It shouldn’t be possible, and yet I hold the proof in my hands as I write this. It’s quite a feat—especially for travel. I struggle to imagine the person who would want a gaming laptop but absolutely can’t stomach the idea of a 14-inch or 15-inch machine. That said, I spent years on the road hauling oversized gaming laptops like so many cinderblocks. The prospect of tossing the Blade Stealth in any old bag and forgetting it’s there is compelling.

The Blade Stealth is a gorgeous machine, too. The 2018 model featured Razer’s old Blade design language, not-so-subtly borrowed from the MacBook circa 2013. By the end of 2018 Razer had moved to a more modern look, trading the rounded lid for a flat black slab. It’s very clean, and likely saved Razer a millimeter or two that was put to better use elsewhere.

Oh, and there’s the three-headed snake. It’s an iconic logo, which is great—unless you want to bring the Blade Stealth to work without catching glances. Black-on-black is subtle at least, but it feels like Razer can’t decide whether it’s ashamed of its gaming past or wants to embrace it. That’s a recurring theme with the Blade Stealth, I guess.

Inside you’ll find the aforementioned 13.3-inch display. Colors aren’t quite faithful enough that I’d do professional design work on the Blade Stealth, but they pop nicely, and the brightness lands well north of the 250 nits we use for testing.

The 120Hz refresh rate is very smooth, albeit a bit inconsequential. You sure can admire the way your Word docs zip around the screen, but it’s a subtle effect that’s ironically mostly noticeable when you find yourself slumming it with a 60Hz display again.

Anyway, I’d be remiss if I didn’t point out that Razer also fixed two of the problems I had with previous Blade Stealth iterations. First and foremost, the keyboard lighting now properly backlights the Function keys, both primary and secondary labels. That was one of my biggest complaints before, so it’s great to be able to adjust volume or brightness without needing to squint. I also really love typing on the Blade Stealth. If you’re buying one primarily for work (a.k.a. writing), rest assured, it’s great for that.

The other improvement is the addition of a second USB-C port. I still think USB-C is a devil’s bargain: Fast charging is nice, but the cable still feels fragile, sticking out at a 90-degree angle. Because the new port is on the other side of the laptop from the existing one, however, you at least gain the convenience of charging from either location.

Performance is where reviewing the Blade Stealth gets tricky. As I said, Razer’s claiming this is the “first gaming Ultrabook,” which is…debatable. Microsoft’s Surface Book 3 includes a GTX 1660, the Dell XPS 15 contains the same 1650 Ti Max-Q as our Blade Stealth, and the Asus ROG Zephyrus G14 boasts an RTX 2060 Max-Q inside.

I’d argue all of these laptops are in the same class as the Blade Stealth. None are quite as small, but Razer didn’t claim this is the first 13-inch gaming Ultrabook, just the first gaming Ultrabook period, and that’s a stretch.

Still, it’s a sparsely populated field at the moment, and a hard one to judge. Reviews are often a question of taxonomy, meaning we have to decide whether the Blade Stealth is more gaming or Ultrabook. Determining how to classify the Blade Stealth also determines how high we set the bar for performance. Is this an overpowered work machine? Or an underpowered gaming laptop?

It’s both, of course, as we see with our Cinebench results. Used to measure short-burst CPU performance, the Blade Stealth isn’t the zippiest implementation of the Core i7-1065G7 CPU—one of the slowest, actually—but it fell within spitting distance of the Dell XPS 13 and the Microsoft Surface Book 3.

Compared to higher-end CPUs though? The XPS 15 and Zephyrus G14 blow the Blade Stealth out of the water. The latter puts up an especially strong showing–its AMD Ryzen 9 barely breaks a sweat.

Our HandBrake test demonstrated the same. We encode a 30GB MKV file down to the “Android Tablet” preset, a lengthy task that stress-tests the CPU over a long period of time. Again, the Blade Stealth does pretty well for an Ultrabook, but terribly next to laptops with more standard (read: powerful) gaming CPUs.

What about graphics? After all, this is a gaming Ultrabook. When we ran the Blade Stealth through 3DMark’s Sky Diver test, it stormed past Ultrabooks that rely on internal graphics, like the XPS 13—arguably the closest competition when it comes to that 13-inch form factor.

If you don’t mind an extra inch or two of laptop though, the question becomes muddier. Remember, the Surface Book 3 and XPS 15 both include graphics cards, as does MSI’s Prestige 14. The Blade Stealth doesn’t look nearly as impressive next to them. Worse, the Zephyrus G14’s RTX 2060 smokes the Blade Stealth. Absolutely leaves it in the dust. Here’s more proof, in the form of Rise of the Tomb Raider.

The Zephyrus G14 isn’t some monster gaming laptop. At 12.8 x 8.7 x 0.7 inches, it’s a tenth of an inch thicker than the Blade Stealth and about an inch longer. And judging by the results, it’s a gaming laptop full stop, not a hybrid. Oh, and did I mention it’s $300 cheaper?

The Blade Stealth is an impressive laptop. Amazing, really. It’s a 13-inch Ultrabook with a lot of power under the hood. But at what cost? Packing this much performance into the Blade Stealth means it’s fairly expensive as both as a work machine and a gaming machine—the former because you’re paying for performance you might not need, the latter because the price-to-performance ratio is skewed in favor of miniaturization. Even Razer’s own 15-inch Blade sells for $1,599 with a stronger Core i7-10750H and GTX 1660 Ti. Stepping up to $1,799 (or the cost of our Blade Stealth review unit) gets you a 15-inch Blade with an RTX 2060 and a 144Hz display.

The Blade Stealth is certainly more capable than the similarly priced XPS 13, and a great deal cheaper than the $2,799 Surface Book 3, so Razer’s not exactly out of line with its pricing. But it’s a strange road we’ve gone down, packing more and more performance into these dainty (and supposedly work-centric) 13-inch laptops. I think I liked the Blade Stealth better when it was $999 and did half as much.

The one area where the Blade Stealth really shines—for a gaming laptop at least—is battery life. Our battery test entails looping a 4K video, with the laptop set to 250 nits’ brightness, until the laptop dies. It’s not wholly indicative of gaming performance, which is more power-intensive, but gives us a decent point of comparison. The Blade Stealth performs admirably, netting just under 10 hours of battery on the 120Hz display. Expect the 60Hz model to last even longer.

That’s impressive, given most gaming laptops still struggle to hit even four or five hours runtime. The Blade Stealth even compares favorably to certain Ultrabooks, like the MSI Prestige 14 and XPS 15. (The Asus ROG Zephyrus G14, in true gaming laptop fashion, dies in just over six hours.)

I loved my time with the Razer Blade Stealth, as I’ve loved the ones that came before. But this time I’ve struggled to pin down the intended audience. Taken in a vacuum, the Blade Stealth’s both a fantastic work machine and a solid gaming machine—if you can ignore that it costs more than comparable machines in both categories.

But hey, maybe the working professionals never showed up for Razer. People certainly know Razer for gaming, and I wouldn’t be surprised if its most vocal fans demanded the Blade Stealth be what it was never intended to be. If that’s the case, well, it’s a shame. This year’s Blade Stealth is a technical feat, a marvel of engineering, but I’m not quite sure why Razer went to the trouble when the 15-inch Blade fills nearly the same role, and for cheaper. Just buy a bigger bag.