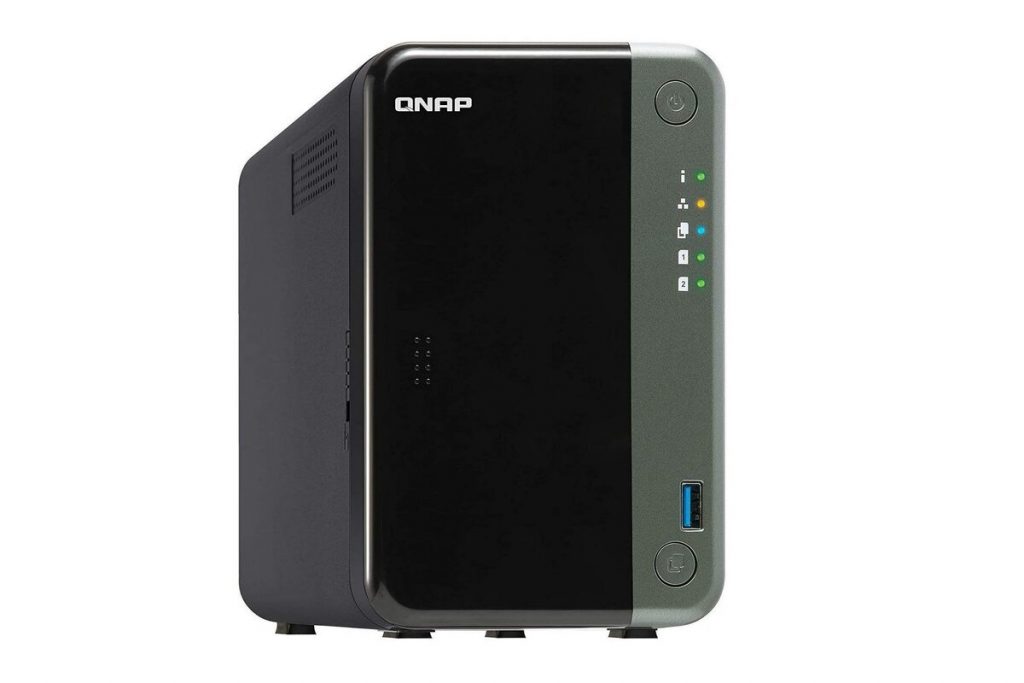 QNAP’s $469 TS-253D is the second NAS box sporting dual 2.5GbE ports we’ve tested, butting heads with Asustor’s fast, easy, and surprisingly powerful $300 AS5202T. Having 2.5GbE makes a huge difference in performance, dramatically increasing the number of devices you can simultaneously stream to or back up.

You’ll immediately notice that the TS-253D is considerably pricier than its rival, but QNAP’s box features a PCIe slot for adding features such as 10GbE and NVMe SSDs, and it makes far better use of an external display attached to its HDMI port.

How so? the QNAP can play movies, run slideshows, let you browse the internet—heck, it can even function as a lightweight workstation. The Asustor simply shows an administrative command line.

This review is part of TechHive’s coverage of the best NAS boxes for media streaming and client backup, where you’ll find reviews of competing products, plus a buyer’s guide to the features you should consider when shopping.

The QNAP TS-253D-4G that I tested is approximately 6.6 inches deep, 4.1 inches wide, and 8.9 inches tall. It’s a two-bay, tower-orientation NAS box boasting a very attractive industrial design. There’s a latching, slide-away cover over the drive bays which feature quick-change, pressure-fit trays. The trays have tool-less snap-in rails for mounting hard drives, but you’re back to screws for installing SSDs like the ones I used for benchmarking.

There are power and quick-copy buttons on the front of the box, along with a USB port and status lights for power as well as LAN and drive activity. Dual 2.5GbE ports ports are around back, along with four more USB ports and HDMI for direct output to up to a 4K display (that’s true 4K, by the way: 4096 x 2160 pixels). You’ll also find a recessed reset button and a Kensington lock port here.

There’s a quad-core Intel J4125 Celeron processor inside the TS-253D-4G, along with with 4GB (the 4G in the name) of DDR4 memory in one of its two SODIMM slots. There’s also the aforementioned x4 PCIe slot for expansion cards that allow you to add 10GbE, or M.2 SSDs (SATA or NVMe). QNAP sells a number of add-in cards for this slot, which you can peruse at QNAP’s Amazon storefront. Fair warning: None of these components are what most people would call inexpensive.

QNAP’s hardware is generally top-notch, and the company pairs it with its excellent QTS operating system—one of the first with what is now a de rigueur windowed-OS-in-a browser HTML interface. It’s impressive, if not as well-organized as some. You can experience it at this link.

The app selection is voluminous. For starters, there’s a very competent DLNA server for streaming content off of the box. Plex, with its broader and fancier media streaming support, is also available. Even TVs with poor or no in-house media players feature Plex. Roon server is available for those that who CD-quality music streamed from the box. QNAP also offers a number of its own proprietary multimedia apps for not only its NAS boxes, but also for macOS and Windows computers as well as iOS and Android mobile devices.

QNAP’s Hybrid Backup Sync is powerful and versatile, if not the most intuitive backup program in the consumer NAS world. It handles backups to the box from other sources, backups from the box to other destinations, and it will sync with various online storage services. It will do this via SMB, FTP, Rsync, and other protocols, which means you can back up your client computers without installing additional software on them. Hybrid Mount is a new addition to this feature set that lets you mount online sources as local drives. Acronis True image and several other utilities are available as well.

QNAP has app solutions for video surveillance, mail hosting, and content management, too. I used to recommend using the company’s WordPress app, but it’s now so far behind the upgrade and security curve that my last attempt serving my own website from a QNAP box ended in a ransomware attack.

You can also use Virtualization Station on the QNAP TS-253D to host virtual machines, and there are versions of Libre Office, Spotify, the aforementioned Roon Server, and lots of other good stuff available. You can delve into the entire ecosystem at the company’s online app center.

As I said up top, the TS253D makes far better use of its HDMI port than the recently reviewed Asustor AS5202T, which could be extremely handy if you’re pressed for space, as in a dorm room or micro apartment.

You can play movies, display slideshows, stream music, and browse the web. With a keyboard and mouse plugged in, you can even use Libre Office. Some of the available direct-attached apps are shown in the above screen capture.

The TS-253D also supports TV tuners and remote-control units, so you can use the box as an ad hoc TV if you’re of a mind to.

Having 2.5Gbps ethernet makes a real difference in sustained throughput. Where the maximum from a gigabit box is around 119MBps, the TS-253D clocked nearly 300MBps both reading and writing with two SSDs running in RAID 0, and nearly the same in the mirrored RAID 1 you should use to safeguard important data.

Note that the Asustor AS5202T did see an change in performance when ports were aggregated in round-robin mode. Reads jumped about 50Mbps, but writes declined by about the same amount. Aggregating ports on the TS-253D made little to no differences in the modes available. I had no switch capable of the true 802.3ad that QNAP supports, and that might increase performance. I will say that port-trunking (aggregation) on the TS-253D was painless; it has not always been so with QTS in the past.

Note that 2.5GbE is actually capable of an additional 80MBps or so in throughput with boxes that have more bays and therefore drives to distribute data across.

Great if you need all the features

I really love this box. I love its looks, its snappy handling, and its excellent 2.5GbE performance. It’s faster, more refined, and has more features than the Asustor AS5202T. If you’ve got the money, I’m pretty sure you’ll love it too.

If you don’t need the TS-253D’s PCIe slot, on the other hand, or its direct-attached multimedia functionality, opting for the Asustor AS5202T would leave you very nearly as well off—and you’d retain a bit of your wealth, too.