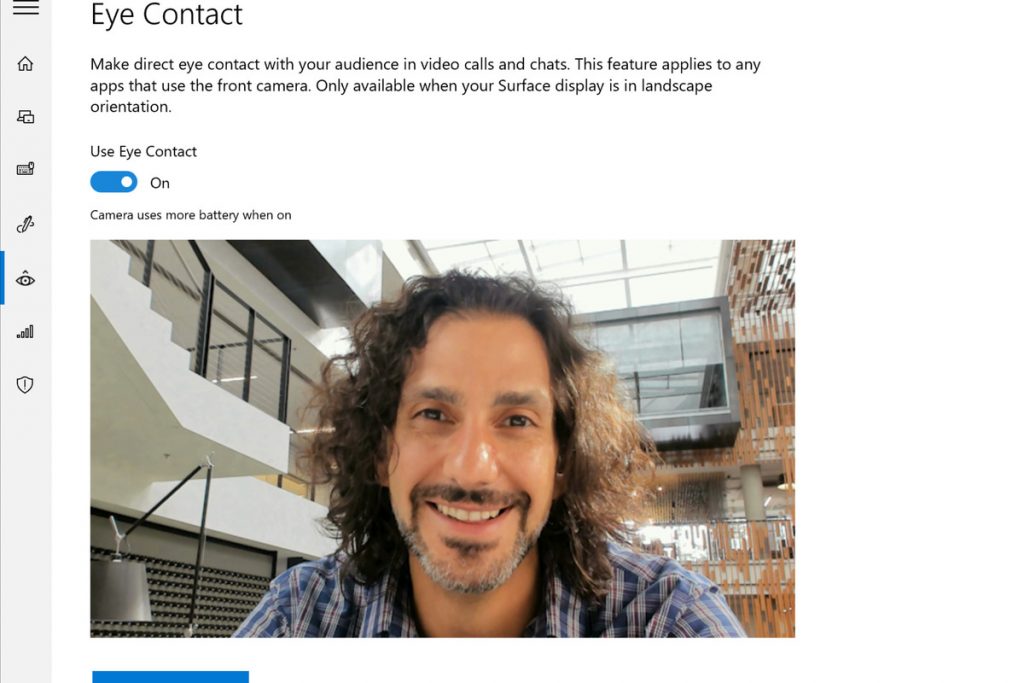 Microsoft’s latest Windows 10 Insider build reanimates the often passed-over Surface app, adding a new capability: a way to use AI so that your eyes appear to meet the gaze of those you’re speaking to on video chats.

Microsoft’s Windows 10 Insider build 20175 for the Dev Channel also takes the Alt+Tab functionality that it introduced at the beginning of July, and expands upon it. Now, in addition to the ability to cycle through various Microsoft Edge tabs using ALT+Tab, users can now pin active tabs to the taskbar, with improved preview features.

Microsoft’s Dev Channel has been repurposed for testing new code of all types, not necessarily specific to an upcoming feature release. It’s not possible to say whether any of the new features being released will ever arrive in a “stable” build used by the majority of Windows users.

It’s probably fair to say, though, that even a majority of Surface users don’t routinely use the Surface app. While the app does pull in functionality found elsewhere, such as Surface Pen controls, it’s generally a basic summary of your Surface’s key features, including the warranty status. Now, Microsoft’s adding a control that might attract more day-to-day users.

Eye Contact, unfortunately, is not specific to all Surface users—just those who own the Surface Pro X. But the app promises to make it look like you’re looking directly at whoever you’re talking to via a video chat, through the magic of AI. It works with every app, Microsoft says, and not just Skype or Teams. Of course, Eye Contact will be more appealing once it rolls out to all Surface devices.

Unfortunately, the new Edge feature will also be available to just a subset of users, too—even if you subscribe to the Dev Channel Insider builds, Microsoft’s simply choosing a small sample set of devices to try this new feature.

Here’s what’s new: If you pin an Edge tab to your taskbar, Windows will show you where that tab resides in just one of your open Edge windows. It’s designed to work with the new, optional Alt+Tab experience, which debuted with a subset of Insider Preview build 20175, also in the Dev Channel. (In that build, you can go into Settings > System > Multitasking to cycle though Edge tabs in addition to your other Windows apps. This can be configured so that Alt+Tab cycles through your most recently used tabs, and not all of them.)

The new build also allows you to reboot UWP apps like Mail via PowerShell, using the following command:

And, if you’re a fan of such a thing, Microsoft is also rolling out new icons for Sticky Notes and the Snip & Sketch app.