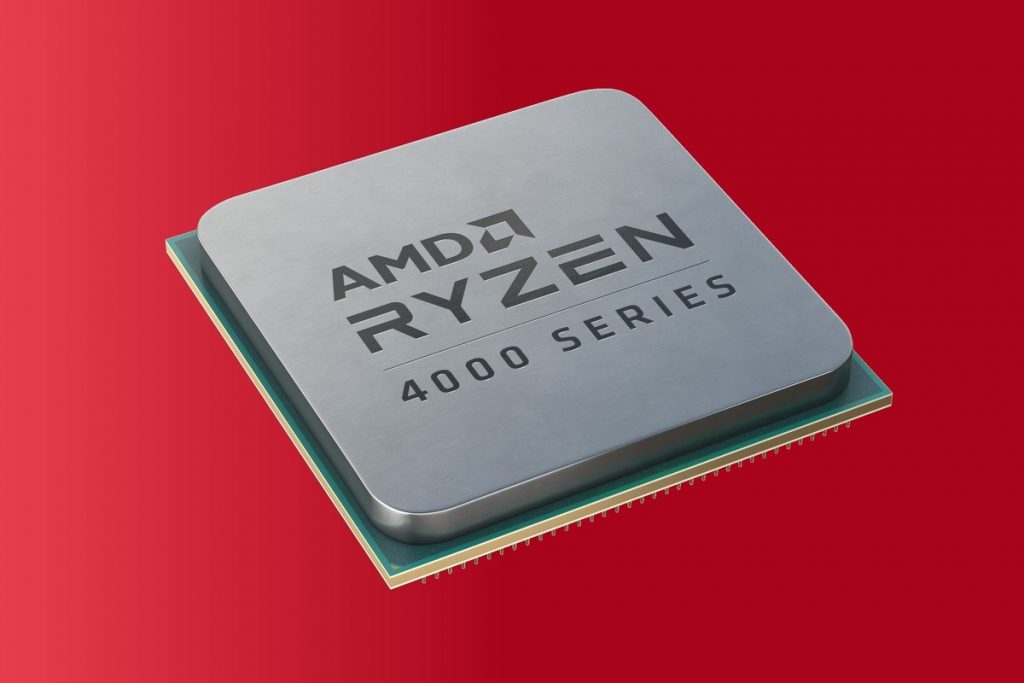 Describing its newest line of Ryzen 4000 G and Ryzen Pro 4000 G chips with graphics cores as the “ultimate” desktop chips, on Tuesday AMD unleashed no fewer than 18 new processors. There’s a catch, though: They’ll be available only in pre-built systems from large PC makers.

Six of the new Ryzens, as well as three new Athlons, are aimed at consumers who would like leading multi-core performance and the ability to play games at 1080p resolution, the company said. Mirroring the nine new Ryzen and Athlons for consumers, AMD also introduced nine Pro models with enhanced security and manageability features.

”So if those enthusiasts are reading the news tomorrow and thinking ‘where my’s upgrade?!’ I promise it’s coming,” Hallock said.

The new chips are essentially desktop cousins of the company’s impressive Ryzen 4000 chips found in laptops, tuned for the higher thermal and power capabilities of a desktop. The new processors are built using a single-die design, with the x86 cores sitting alongside the Radeon graphics cores.

As such, they feature a x8 PCIe Gen 3 connection to the GPU and do not support PCI Gen 4. The chips are compatible with 500-series motherboards and are expected to be paired mostly with B550 and B550 Pro motherboards.

Although AMD didn’t test the new G-series of desktop chips in Adobe’s updated Premiere Pro, we assume the parts should get the same boost as its mobile cousin does. You can read about that here where AMD tested several Ryzen 4000 laptops using the latest version of Premiere.

Alas, DIY builders won’t get a chance to buy them, as the consumer chips will be sold only through large PC manufacturers such as HP, Dell or Lenovo. Smaller system integrators such CyberPower PC and iBuypower also will be left out this round, according to AMD. Those smaller SI’s will get access to the Ryzen Pro chips that are meant for commercial sales though. This morning, in fact, Velocity Micro posted a web page for Ryzen Pro-based desktops on its web site. There was initially some confusion coming out of AMD’s press briefing that system integrators would not get any of the new chips but AMD officials clarified that they would indeed get the pro lineup. One thing that’s for certain though: Consumers won’t get the parts directly.

AMD knows it’s disappointing some fans, and it responded with a message of hope. “We understand and appreciate that there are lots of DIY builders out there that have APUs and they want to upgrade those APUs,” said AMD’s Robert Hallock during a press briefing discussing the new chips. “And while I cannot go into the details of our roadmap, there is a next-gen APU coming for DIY customers, and it will fit into 400- and 500-series boards.”

Most tech companies never make promises, but Hallock broke that rule and actually pinkie-swore to it. “So if those enthusiasts are reading the news tomorrow and thinking ‘where my’s upgrade?!’ I promise it’s coming,” Hallock said.

Meanwhile, Hallock said, AMD is aiming these Ryzen 4000 G parts at more mainstream customers who buy big brand PCs. It’s an important market. DIY customers talk, tweet and video their new APUs and CPUs, but they’re a small (if vocal) community. AMD roughly estimated that OEM sales from the mega-large PC companies to mainstream consumers and corporate customers are four to five times larger than the sales to DIY customers.

Those mainstream customers should be pretty happy with the new chips. The performance appears to be what you’d expect, given AMD’s advantage with its efficient 7nm chips against Intel’s 14nm CPUs.

The weakest part of Intel’s desktop CPUs has been its integrated graphics, which hasn’t budged much in performance. The Radeon cores in the Ryzen 7 make the Ryzen 7 4700G capable of playing popular titles such as Counter Strike: Global Operation, Rocket League, or DOTA at 1080p with reasonable frame rates, AMD said.

One might successfully argue that at the high end, graphics cores on a chip don’t really matter much, because most gamers who buy high-end CPUs almost always pair them with discrete graphics cards. Mainstream PC users typically skip the pricey upgrade.

In fact, for those mainstream users, even the Ryzen 7 4700G might be too rich for their blood. That’s why AMD is also offering the midrange Ryzen 5 4600G, which matches up nicely with the older 9th-gen Core i5-9500.

AMD pulled a fast one

If you’re a close observer of Intel’s lineup, you’re probably ready to raise your hand and object strenuously that AMD is pulling a fast one. For all of its comparisons, AMD compared its Ryzen G chips to Intel’s 9th-gen chips, such as the Core i7-9700, the Core i5-9500, and the Core i3-9100.

This next chart of CPU performance looks like the previous ones, with the Ryzen 3 4300G running circles around the Core i3-9100.

AMD fans could argue that Intel’s newest 10th-gen chips typically offer just slightly higher clock speeds, but that would ignore the most significant change Intel made with most of its 10th-gen chips: Hyper-Threading. Hyper-Threading performance would likely put Intel’s comparable CPUs in a far better showing against these Ryzen Gs.

When asked about the use of 9th-gen Intel parts for comparisons, AMD blamed it on the inability to get its hands on competitive CPUs in time. To an extent that’s true. Looking on Amazon, Intel’s Core i7-10700 wouldn’t arrive until early August if purchased yesterday. However, we were able to find the CPU at Newegg.com, and other Intel 10th-gen chips could be found at various stores if you looked hard enough this week.

Another thing to consider is the effect of the pandemic. Given the situation, sourcing competitive parts for testing with enough lead time to get through the usual corporate approval train is a big ask.

Picking on poor old 9th-gen isn’t just poor sportsmanship, though—it was probably also unnecessary. Intel’s 10th-gen chips add considerably more performance in multi-threading from turning on Hyper-Threading for the masses, but they still use the worn-out Intel integrated graphics cores introduced literally three Avengers movies ago (I count Captain America: Civil War as an Avengers movie). AMD’s chart comparing a Ryzen 5 4600G vs. a 9th gen Core i5-9500 likely wouldn’t change much even if you dropped in a 10th-gen Core i7-10500.

The same can be said of gaming results from a Core i3-9100. It wouldn’t get much better with a Core i3-10100. This situation isn’t likely to change as long as Intel continues to wheel out its decrepit integrated graphics.

Knowing how irrelevant AMD’s numbers are against Intel chips, it might be better to compare them with another known quantity: AMD’s older G chips. There, the newest Ryzen 4000 G’s look pretty impressive. First up is the Ryzen 5 4600G against the popular Ryzen 5 3400G.

As the new Alpha APU, the Ryzen 7 4700G rules the roost in multi-threaded performance. Over the previous top-end Ryzen 5 3400G, it’s up to 152 percent faster.

Even more important in this launch is AMD’s Ryzen Pro lineup. These chips are close cousins of Ryzen 4000 G chips, but bring fleet management and encrypted memory features to the table. These are the chips that typically go into those small form factor boxes you see at the bank teller’s desk, or tucked onto a cart in your doctor or dentist’s office.They typically sell by the container-full to large corporations looking for stable, reliable and non-flashy computing.

With few working in offices right now, the demand for commercial desktops might be tempered. Still, it’s an important and profitable sector that AMD is addressing with chips that offer far more graphics performance than typical office workers get.

If you’ve been waiting patiently to get pricing and availability of the new chips, keep waiting. As the chips will be sold solely to big PC makers, there is no public price. And because those same big PC makers get to announce when they will sell PCs using AMD’s newest chips, AMD can’t even say when you’ll even be able to buy a new PC with the Ryzen 4000 G chips inside.

Updated with confirmation from AMD officials that system integrator companies will be sold the Ryzen Pro and Athlon Gold line.