Apple has released iOS 13.5 for iPhone and iPod touch devices as well as iPadOS 13.5 for iPad users. The latest software updates simplify the unlock process specifically for devices with Face ID to help users wearing masks. This is an important change considering the fact that due to the coronavirus impact, wearing a mask has become a new normal worldwide. iOS 13.5 and iPadOS 13.5 updates also enhance Group FaceTime calls with an automatic prominence option. For iPhone users, the latest iOS update also brings the Exposure Notification API to let public authorities develop COVID-19 contact tracing apps.

The most important change that the iOS 13.5 and iPadOS 13.5 updates bring to your Apple device or devices is the improvement related to the unlock process for devices using Face ID. The updates speed up access to the passcode field when the facial recognition technology detects that you’re wearing a face mask — or anything that hides half of your face. This makes it easier to unlock your iPhone or iPad without removing your mask. 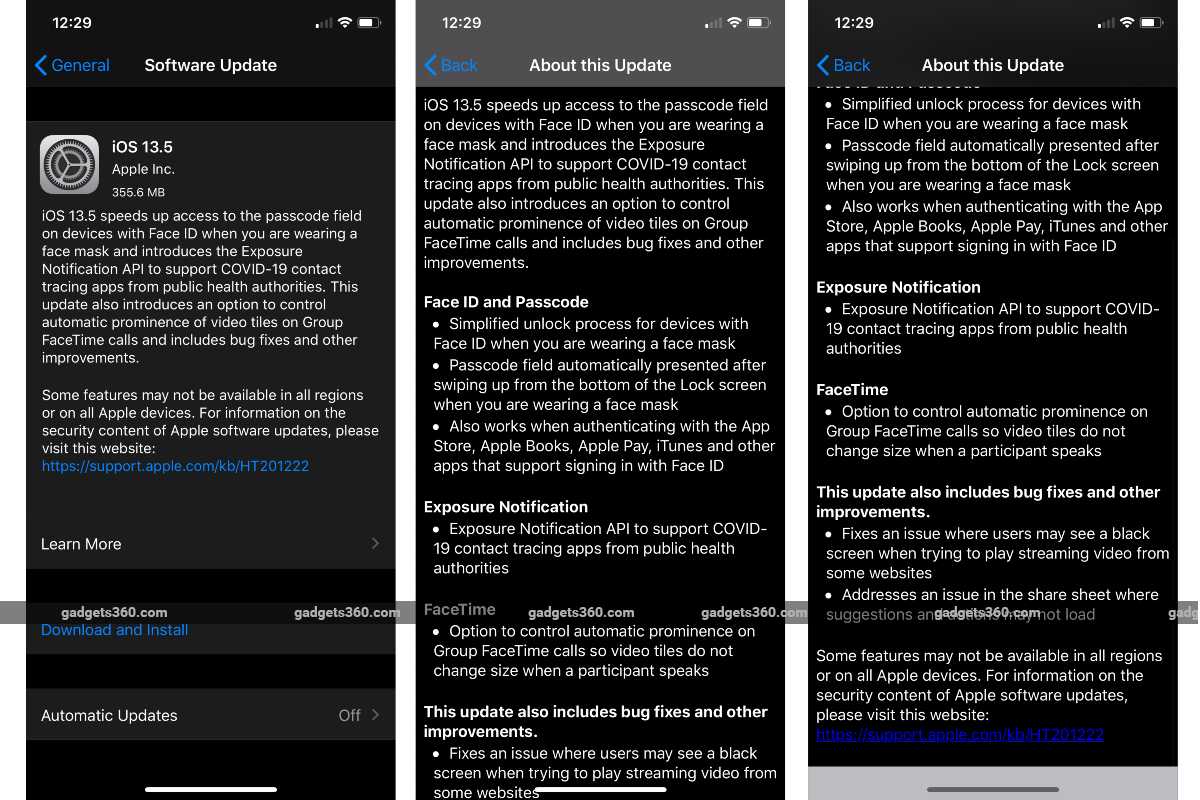 iOS 13.5 has been released for all compatible iPhone users

Prior to the latest updates, the unlock process offered by Apple would prompt Face ID unlock again if it got failed in the first attempt. The new change, however, omits that second attempt and lets you slide up to bring the passcode screen. This is something that we saw in a testing phase on the iOS 13.5 beta late last month. It works not just with the default unlock screen but also when authenticating with the App Store, Apple Books, Apple Pay, iTunes, and other apps that support signing in with Face ID.

This change is, obviously, limited to the iPhone and iPad models that have Face ID support.

The new iOS and iPadOS updates also bring the option to control automatic prominence on Group FaceTime calls. This lets you decide whether you want the video tile of a participant to become larger automatically when they speak. The option is enabled by default, though you can disable it by going to Settings > FaceTime > Automatic Prominence. For iPhone users, the iOS 13.5 update also brings the Exposure Notification API that has been built by Apple and Google to support contact tracing apps from public health authorities. There won’t be any changes, unless you have installed an app that uses the API.

The users in the US have also got an emergency call update that allows the device to automatically share health and other details from their Medical ID with emergency services.

Apple has also fixed an issue that was causing a black screen when trying to play streaming videos from some websites. Furthermore, the updates address an issue related to the share sheet that was limiting suggestions and actions.

You can read all the security content of the latest iOS and iPadOS updates from the Apple support page.

You can check the availability of the update on your iPhone, iPod touch, or iPad device by going to Settings > General > Software Update. Make sure that your device has a sufficient amount of battery and is connected to a Wi-Fi network.