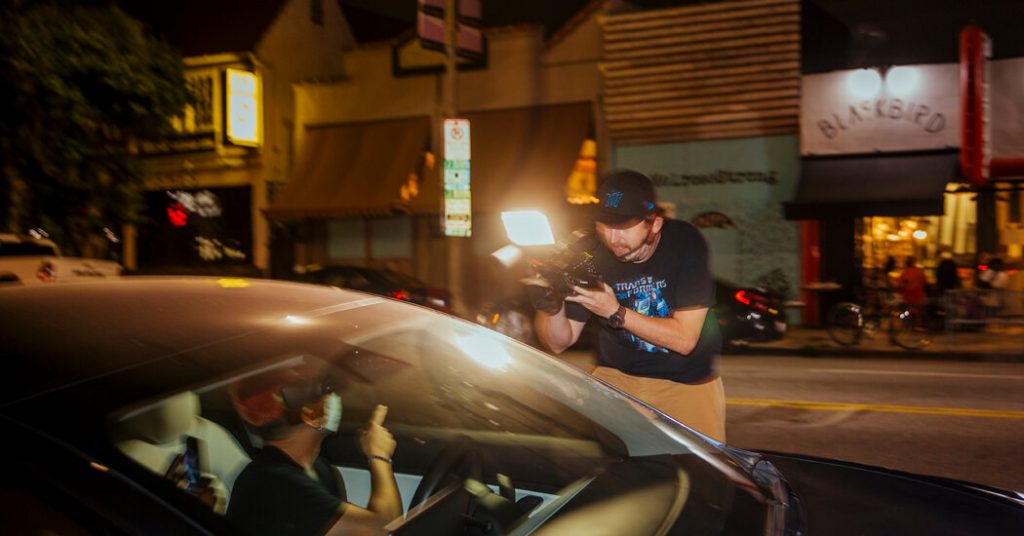 Mr. Greene’s videos have become so ubiquitous on the teen internet that they’re now a meme. Hundreds of young people on TikTok have posted Hollywood Fix parody videos, and YouTubers like Emma Chamberlain have referenced the Hollywood Fix in their videos. People often parrot Mr. Greene’s signature catch phrase — “The fans wanna know!” — in videos and replies on Twitter.

“Whenever I have nothing to do, I’ll watch the Hollywood Fix,” said Alana Lintao, 16, a TikToker in New Jersey who creates parodies of Mr. Greene’s videos. In January, she spent hours consuming content on his YouTube channel. “I kind of got caught in a loop and I was binge watching all of the videos,” she said.

Becoming a celebrity documentarian — not to mention an authority on Gen Z — wasn’t Mr. Greene’s plan when he moved from Dallas to Los Angeles in 2013. He had come to the city for a change of pace. At the time he was working as a music producer.

Soon after his arrival, he noticed the number of famous people walking around his West Hollywood neighborhood. “I used to live down the street from Karrueche Tran, and I’d see Chris Brown,” he said.

One day, he began snapping pictures of the two with his phone. He called up TMZ to see if someone there would be interested in buying them, and to his surprise an editor offered him $1,000 in exchange for a few photos.

So began his career as a paparazzo. Mr. Greene started chasing celebrities around town, building connections with valets and service workers who tipped him off to the whereabouts of celebrities.

In 2014, he decided to put some of his content on YouTube. He was doing more video interviews and wanted a home for the stuff that the tabloids weren’t buying. At the time, he said, People magazine and The Daily Mail weren’t interested in footage from, say, outside Jake Paul’s home, but the fans of his young influencer subjects ate the videos up and his subscriber base ballooned.

By 2016, Mr. Greene was making decent money off his YouTube channel. This spring, it surpassed 1.4 million subscribers. Then, the pandemic hit in March, and suddenly everything changed. Celebrities began keeping a lower profile, stepping out only to walk their dogs or run small errands. Mr. Greene decided that rather than park outside Jennifer Lopez’s house all day hoping for one photo, like other paparazzi, he would cover the stars who were posting openly about their house parties and public outings.

“The TikTokers are always in groups,” Mr. Greene said. “All the popular ones pretty much only hang out with popular ones. If you catch one you catch two or three or four. It’s not like if you get Ben Affleck you also get Jennifer Lopez and Alex Rodriguez and Madonna. They don’t hang out like that.”

When BOA Steakhouse, an upscale American restaurant on Sunset Boulevard, opened for outdoor dining in June, it became an overnight hot spot for Gen Z influencers. Mr. Greene parked himself out front and began interviewing the young stars about their lives and drama as they came and went.

“The Hollywood Fix is very much covering what’s happening on the internet rather than who’s a big celebrity,” said Kai Watson, 19, a founder of The Sync, a commentary channel and podcast. “You watch a video of a huge celeb walking down the street and it has like 10,000 views, but right next to it is a Hollywood Fix video ‘Catching up with Charli D’Amelio at BOA’ with 10 million views.”

Part of what has made the Hollywood Fix the go-to outlet for influencers is the relationship Mr. Greene has with his subjects. They know that he has done his research and takes their careers seriously.

Many of these young stars consider a Hollywood Fix interview to be a marker of status. “A lot of up-and-coming creators will say, OMG! I was finally on Hollywood Fix,” Mr. Watson said.

For many TikTok stars, Mr. Greene’s channel is a conduit to the broader news media; his outlet is the first they go to when they want to discuss something new or big that they hope will be covered elsewhere. On Aug. 17, when the YouTuber Elijah Daniel hosted a joke event for his new collab mansion, the Alt Haus, he rang up the Hollywood Fix for coverage as a form of commentary on the publicity seekers of “straight TikTok” (the dancers and lip-syncers most readily associated with the app).

The reality star Spencer Pratt compared Mr. Greene to Ryan Seacrest, whose radio show has always featured celebrity guests and news items. “Back in 2008, when we were famous, Ryan Seacrest would text you and you’d call in and he’d ask what’s going on,” Mr. Pratt said. “All the TikTokers use the Hollywood Fix how we used Seacrest.”

Mr. Greene has also built an authority with influencers’ fans. “My stuff is really fan-driven,” he said. “A lot of people make fun of me for saying ‘The fans wanna know!’ but I have hundreds of fans a day saying ‘Can you please find this person and ask them this or that? We need to know the answer!’ So I specialize in what people want to know about.”

The openly cozy relationship between Gen Z influencers and the paparazzi represents a sea change in the industry, said Mr. Pratt, who described being “shamed” for the same behavior just years ago. “These TikTokers have reinvented everything,” he said. “Now it’s cool to film yourself and call the paparazzi and self promote.”

Mr. Greene said that TikTok influencers have breathed life into the young Hollywood landscape. “All these kids are young, rich, good looking and live in these mansions,” he said. “It’s like a current version of ‘90210.’”