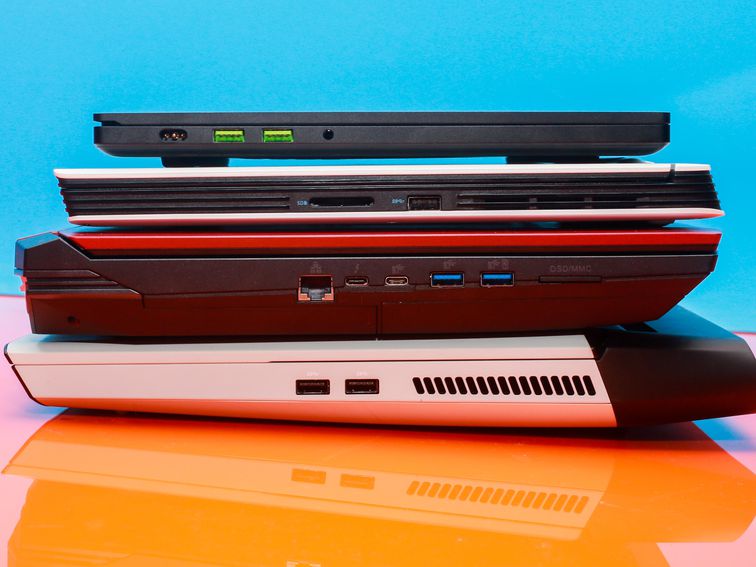 A gamer knows that there’s more to a gaming laptop than raw speed. You can pack it with the best graphics card processor, tons of fast solid-state drive storage to hold your games, a gazillion-core processor, a rock-solid hard drive for secondary storage and the fastest, most colorful display around — and it can still fall short. Those powerful components may overheat at the worst moments or you might just experience some instability. Or perhaps you don’t want to always use an external keyboard, but the built-in version feels like mashed potatoes under your WASD keys.

The good news is that not all games are bottlenecked by dual cores or a last-generation GTX, so it’s not a given that you’ll need to bust your budget to pay for a new laptop.

With almost any gaming laptop, no matter how fast or slow, the compromise you make is battery life, which can last as little as 2 hours. You also can’t play most complex games — GPU- or CPU-intensive ones — on battery power. The processors tend to get throttled back and screens dim, so a laptop that feels nimble when connected is lead-footed on battery power, turning your gaming experience into a battle of frustration.

But components do matter. The fastest graphics card currently available in a laptop is the Nvidia GeForce RTX 2080 Super, followed by the RTX 2080 Super Max-Q. The Max-Q versions run at slower frequencies than their full-size siblings — this is to keep the noise and heat down and to help them fit into thinner designs. RTX models also accelerate ray-traced rendering and provide intelligent upscaling (also known as DLSS) where it’s explicitly supported. If your favorite games don’t use it, the lower-end Nvidia GTX 1660 Ti incorporates Turing, the latest generation of Nvidia’s technology, without the extra cost burden of the RT cores. It’s not equal to the the last-generation Nvidia GTX 1080, however.

The problem with the Max-Q, though, is that you have to reboot to switch between a dedicated GPU mode and the original Optimus mode, which only uses the GPU for accelerating, not actually drawing the screen. That means you can’t take advantage of the Max-Q’s ultrafast refresh rates with Optimus. So why not leave it on the GPU mode all the time? Because you’ll frequently get poorer CPU performance and even lesser graphics performance in games that balance CPU and GPU usage rather than going all out on the GPU.

Nvidia has unveiled the next generation of its Max-Q architecture which supports Advanced Optimus. It’s smarter, with the integrated and discrete graphics sharing (rather than switching) the pipeline to the display, so no reboot necessary. But it accomplishes that through a major change to its system design, so laptops supporting Advanced Optimus are scarce.

More cores may help when choosing a CPU, though at the moment most games still don’t use more than four. That’s partly Intel’s rationalization for its continued reliance on its old 14nm architecture for the 10th-gen high-performance (H series) processors. It lets the company boost single-core clock frequencies, compared with gains it would make by moving to a smaller process technology such as Ice Lake, which is designed to support more cores on less power draw.

AMD, on the other hand, started shipping its own H processors of the Ryzen 4000 series, including a new mobile Core i9 competitor, the eight-core/16-thread Ryzen 9 4900HS. We tested it in the new Asus ROG Zephyrus 14 and it flies on both multi- and single-core. The Origin PC Eon15-X can also be equipped with a Ryzen 9 3900 desktop processor, a 12-core beast that’s great for CPU-intensive software, but not really gaming.

And then there are the screens. Everyone’s bumping their flagship 1080p configurations to 300Hz, but for many a gamer, they’re not essential: 240Hz max should be fine for those few times you can get frame rates above 240fps. Even 144Hz will do for many people, but artifacts like tearing, caused by the screen refresh rate becoming out of sync with the frame rate, depend on your games as much as your laptop brand and hardware.

We’re also seeing a lot more 120Hz 4K screens in the flagship models, in both 17-inch and 15-inch sizes. We’ve tested the 17-inch in the Razer Blade Pro 17 and the 15-inch in a nongaming laptop, and they’re very, very nice. While OLED screens seemed like the best thing ever for building a gorgeous gaming rig — OLED has great color and contrast with fast response times — they’re still limited to 4K/60Hz on laptops, as is the forthcoming 14-inch 1440p display Asus will be offering for the G14. So for 4K, the 120Hz screen is looking more popular.

Still with us? Great. If you’re a gaming beast who wants to do a deep dive into what’s out there right now and figure out which is the best gaming laptop for your desired gaming experience, check out our recommendations below.

There’s no such thing as a budget gaming laptop. But solid gaming graphics power and strong battery life are the foundation for a good gaming laptop. And the price makes this Dell G5 15 a great bargain. (The shopping link goes to the new Dell G5 model, which we’re in the process of testing.)

If you’re going for best, go big. Yes, there are faster 17 inchers, but I draw the line at dual humongous power bricks. (Doesn’t matter to you? Check out the Gigabyte Aorus 17X, Alienware Area-51m and other mammoth systems)  The Blade Pro is fast, but doesn’t sacrifice its svelte figure.

While we recommend getting this Blade Pro laptop with its 4K-resolution display option for creators, gamers will want to get the display with a 300MHz refresh rate that Razer offers for this model.

The Zephyrus G14 is a little smaller than usual for a gaming notebook at 14 inches, but you probably won’t notice much of a difference between it and a 15-inch model — especially since it packs quite a bit in for the money. Its AMD Ryzen 9 4900HS CPU blows away current Intel competitors for processor performance, and it’s capable of business-laptop battery life of up to 10 hours when you’re not gaming. Gaming performance is solid for an RTX 2060 Max-Q, and it’s matched well with the 120Hz 1080p display. In June, Asus is slated to ship a model with a 1440/60p screen if you’ve a yen for higher resolution.

An Nvidia GeForce GTX 1650 means it only delivers decent 1080p performance on high, but if you’re a gamer looking for a big screen on a budget, this one will serve you well given its sub-$900 price.

Whether you prefer the sleek look of the Mercury White model or the powerful black slab version with an Intel Core i7 processor, 16GB of RAM, an OLED 4K display and up to an RTX 2080 GPU, Razer’s understated style won’t leave bored coworkers wondering what games are monopolizing your screen during meetings. They may wonder if you’re overpaid, though, since this laptop is not cheap.

For that gamer looking for something a little extra from their display, a small second screen on this gaming laptop is great for monitoring other activities, like chats or walkthroughs, while you’ve got a little lull in your play. And it’s no slouch in the performance department, either, especially in HP’s Dynamic Power mode. I’m currently testing the Asus ROG Zephyrus Duo 15, though, which may unseat it as dual-screen recommendation.

You can add some custom graphics to make the generic chassis a little more stylish, but it’s the wealth of component choices that makes this best gaming laptop an appealing buy for a gaming beast — though not a cheap one. Additionally, because the Eon17-X is basically a desktop in a laptop’s body, it’s REALLY heavy compared to the others on this list. That said, it’s also a super powerful gaming laptop; it’s been updated for 2020 with a new design and even more powerful components — up to an Intel Core i9-10900K and Nvidia RTX 2080 Super GPU.

The 17-inch Triton 900 is fast — it’s one of the top-five fastest laptops we’ve tested recently — but that’s not its superpower. It has a rotating display that you can flip over to leave the built-in keyboard behind it, which means it doesn’t get in the way when you’ve got an external keyboard attached. So if you desperately need your lucky backlit keyboard, this is the best gaming laptop for you.