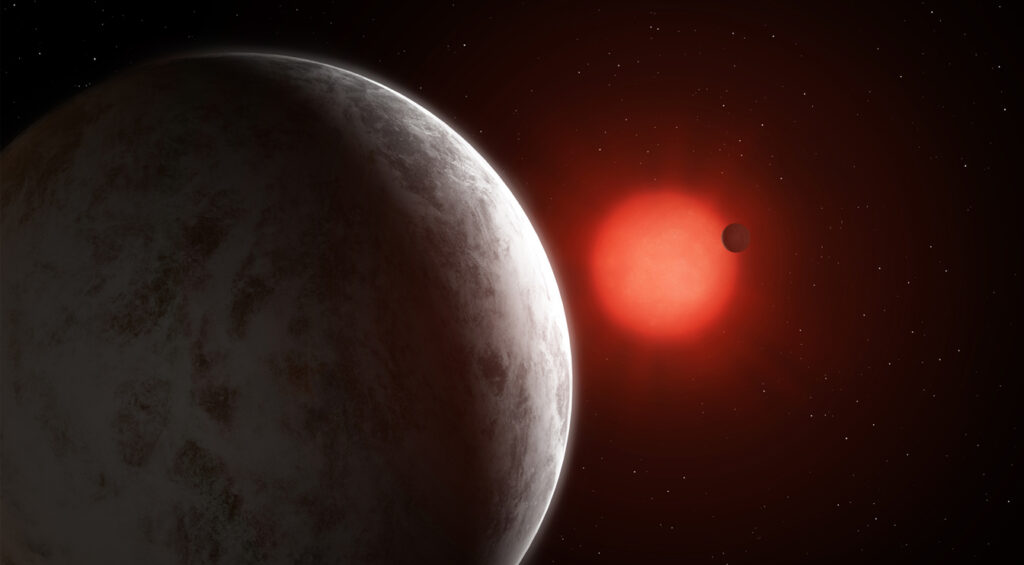 The hard work of astronomers around the world using instruments like the Kepler Space Telescope has shown there’s no shortage of planets in the cosmos. Most of those exoplanets are far away, but a handful are right next door (on an astronomical scale). The “RedDots” team from the University of Göttingen has reported the discovery of two new exoplanets just a few stars away orbiting Gliese 887, and they’re of the potentially habitable variety.

Astronomers have devised two ways to reliably detect exoplanets with our current technology. Most exoplanets are discovered by monitoring stars for a small dip in luminance caused by planets passing in front of them. However, this only works with star systems on the same approximate plane as ours. The other method involves measuring tiny countermovements in stars caused by orbiting planets — the radial velocity or “Doppler wobble.” The University of Göttingen team used the latter to identify Gliese 887b and Gliese 887c.

The RedDots project focuses on nearby red dwarf stars like Gliese 887, which is 11 light-years away. These stars are smaller and cooler than the sun, but scientists have had great success finding exoplanets around these objects, and we can learn more from the study of exoplanets closer to Earth. Using the HARPS spectrograph at the European Southern Observatory in Chile, the team has confirmed Gliese 887b and Gliese 887c are in very close orbits around the star. Based on their apparent masses, they’re most like rocky planets somewhat larger than Earth, known as super-Earths.

Gliese 887b reportedly has an orbital period of just 9.3 Earth days, and Gliese 887c completes a “year” every 21.8 Earth days. Despite being so close to the star, scientists believe they are in the habitable zone of the cooler red dwarf — measurements of Gliese 887c suggest a surface temperature of 158 degrees Fahrenheit (70 degrees Celsius). That’s not exactly cozy, but it’s within the range necessary for liquid water. These exoplanets are particularly interesting because Gliese 887 is one of the calmer nearby red dwarfs. Planets tend to orbit these stars so closely, putting them in range of intense solar flares and radiation. Gliese 887 might not have heat-blasted these exoplanets, making them even more interesting objects for study.

The ream believes the nearness and potential habitability of these planets will make them an ideal target for future observations. The upcoming (and frequently delayed) James Webb Space Telescope might be able to determine if Gliese 887b and Gliese 887c have atmospheres, and if so, what it’s like on the surface.