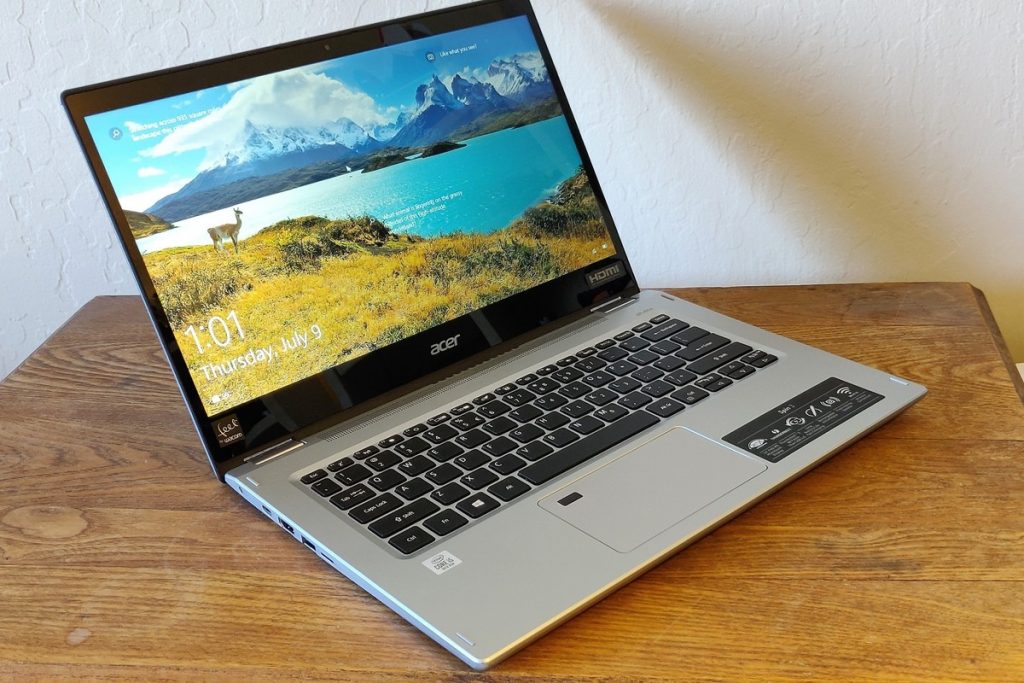 Budget laptops continue to improve, and the Acer Spin 3 is a good example. For an affordable price it offers adequate components and battery life, with enough flexibility to accommodate a range of peripherals. Though the 14-inch, 360-degree convertible laptop delivers middling performance, a modern Thunderbolt port and a nifty integrated stylus stand out. In all, it’s a solid laptop, but in a market whose competition is growing stronger, quickly.

The Acer Spin 3 (SP314-54N-58Q7) we tested is sold at Costco for $650, although the company lists a few alternatives on its Acer online store. Of the four listed, only one, the SP314-54N-50W3, contains an up-to-date Core i5-1035G4 processor as well as a larger 512GB SSD, for about $150 more. (Intel’s 10th-gen “Ice Lake” processors use the number attached to its “G” suffix to indicate the relative graphics performance, with a higher number being better.) We still consider our review unit’s loadout—8GB RAM, 256GB SSD—adequate for most needs.

Here are the basic features of our review unit, which is backed by a one-year “International Travelers’ Warranty.” Acer says that warranty runs concurrently with its standard one-year U.S. warranty, allowing the laptop to be serviced in up to 30 other countries where Acer has authorized facilities.

A budget 14-inch laptop like the Acer Spin 3 doesn’t ask you to pay for its looks. At about 17mm thick, the Spin 3 is a tad chunky, but in a good way: sturdily built, with a pair of thick 360-degree hinges. When you flip around the display, Windows automatically configures the Spin 3 into tablet mode. Another benefit: The broader chassis offers a hearty mixture of ports that you won’t find on thinner laptops.

Acer did cut a few corners in the display. Though the IPS panel was pleasingly vibrant, our light meter registered just 274 nits—barely enough for day-to-day use. Although the side screen bezels measure just 7.82mm, the bezel at the bottom of the screen is a about an inch deep and definitely noticeable.

The Spin 3 seems to have adequate cooling, with venting beneath the laptop and a larger grille near the hinge. My home office environment is quite quiet, allowing me to hear a faint hiss from the fans as they spun up, as well as a faint bit of coil whine. When my home’s central air kicked on, however, the noise disappeared. Even when running CPU-intensive tasks, the Swift 3’s fan remained quiet—that seems to be fairly typical of the Intel 10th-gen Ice Lake laptops I’ve tested.

Personally, I consider the port selection to be close to ideal. There’s a pair of SuperSpeed USB (5Gbps) Type A connections—perfect for a keyboard or mouse, and they can also be used to connect to an external drive, if you don’t mind a slower transfer rate. A traditional HDMI port will connect a single 4K display at 60Hz.

The Thunderbolt port on the Spin 3 is a rare and treasured find on budget laptops. Thunderbolt’s particularly versatile I/O capabilities can connect to a dedicated Thunderbolt dock, a USB-C hub, or an external display.

Thunderbolt is most noteworthy for its ability to connect a pair of 4K displays at an eye-pleasing 60Hz, while a non-Thunderbolt USB-C port can connect to just one 4K display at 30Hz via a hub. Thunderbolt docks, however, range in price from $100 to $250 or so.

There’s another, hidden advantage to the Thunderbolt port. The Spin 3 ships with Acer’s narrow-tipped proprietary charger. The Thunderbolt port accepts a third-party 65W USB-C charger, giving you a secondary power option in a pinch.

Because this is an Intel 10th-gen device, wireless connectivity is supplied by Intel’s WiFi 6 radio and Bluetooth 5.0. (If you don’t understand what WiFi 6 can do for you, Michael Simon’s love letter to the technology should convince you. You’ll need a compatible laptop like the Spin 3 and a WiFi 6E router, to take advantage, though.)

Our review unit shipped with Windows 10 version 1909, which we used for testing. Midway through, it was offered the May 2020 Update, also known as version 2004.

I’d characterize Acer’s keyboards as middling. That’s not necessarily a criticism. Acer’s keyboards tend to be shallow and a bit mushy, bottoming out rather than cushioning your fingers. While the Swift 3 provides a full-size keyboard, the keys themselves tend to be a bit smaller on average, and Acer left itself with close to an inch of additional space on either side. Still, as I typically do, I wrote this review on the Swift 3’s keyboard itself, and it was reasonably comfortable.

Acer’s Precision trackpad fills most of the available depth below the keyboard, with an integrated fingerprint strip in the upper lefthand corner. As a consequence, a good chunk of the trackpad isn’t clickable. I’d prefer the trackpad to be wholly devoted to navigation, as there’s plenty of room elsewhere for Acer to mount the reader. Also, “strip” fingerprint readers typically aren’t as accurate as a larger sensor or a user-facing depth camera, which Acer presumably skipped over for cost reasons. The Spin 3’s reader worked fine, though (and Windows asks you to set up a PIN and password as backups, anyway).

Acer’s audio straddles the broad divide between disappointing and excellent, and that’s due to the default configuration. The Spin 3’s dual speakers are “forward” (upward) facing, and sounded a bit flat and tinny when I started playing music. But Acer also bundles the Spin 3 with the DTS audio enhancement algorithm, which dramatically improves the sound quality with a bit of fiddling. Acer also claims the “TrueHarmony” paper-cone design of its speakers improves the overall audio.

Never, ever turn DTS off, as the sound then dissolves into an aural pile of garbage. Even with DTS turned on, the speakers sounded a bit faint. Using the custom audio settings, however, I was quickly able to tune the speakers directionally (“front” versus “traditional” versus “wide”) to come up something that was both appreciably loud and pleasing to my ears.

Acer’s Spin 3 also includes “Purified Voice,” the name Acer gave its far-field mic technology when it added it to the Spin 5 in 2018. While that device included four mics, this one has two. I was still able to calmly ask Cortana for the local forecast with the laptop across the room, while my home’s central A/C ran in the background. That technology also suppresses keyboard noise, handy in video meetings where you might be typing as you talk.

Noooo! Find out what we didn’t want to see on this laptop, on the next page.