Cyberpunk 2077 looks like a truly next-gen game from everything we’ve seen, but you won’t need a futuristic rig to run it. CD Projekt Red unveiled the system requirements for the hotly anticipated game on Friday, and they’re surprisingly forgiving. You’ll need more powerful gear to unlock the real eye candy, though.

On the processor front, your needs are minimal: an ancient Intel Core i5-3570K or AMD FX-8310 CPU. That’s likely because Cyberpunk 2077 is also landing on the Xbox One and PlayStation 4, which rock ancient, atrocious AMD Jaguar cores. You’ll need only a 3GB GeForce GTX 780 or Radeon RX 470 graphics card, too, so this should run on most modern gaming PCs, even modest ones. The 8GB RAM and 70GB storage requirements are probably more onerous than the CPU and GPU demands.

Those are just the minimum requirements, but the Recommended specs aren’t crushing either. CD Projeckt recommends a Core i7-4790 or humble AMD Ryzen 3 3200G, paired with either a GTX 1060 or a Radeon R9 Fury. You’ll ideally want 12GB of memory for Cyberpunk 2077, and CD Projekt strongly recommends an SSD, though the 70GB storage requirement can also apply to traditional hard drives. The vast, open world will probably feel awfully pokey on an HDD, though.

But some of those DirectX 12 tricks are the reason you may consider upgrading your graphics card for Cyberpunk 2077 when it launches on November 19. Cyberpunk 2077 goes all-in on ray tracing and Nvidia’s fantastic speed-boosting DLSS 2.0 technology. You’ll need a GeForce RTX graphics card to tour Night City with those beautiful, cutting-edge lighting technologies enabled, be it an older RTX 20-series GPU (if you can find one heavily discounted) or one of the just-launched RTX 30-series options (if you can find one for sale).

AMD’s next-gen “Big Navi” Radeon RX 6000 graphics cards will also support ray tracing in some way, though it remains to be seen how (and how effectively). They won’t play nice with Nvidia’s proprietary DLSS technology, however. Look for AMD to unveil Radeon RX 6000 on October 28, mere weeks before Cyberpunk 2077 itself hits the street. 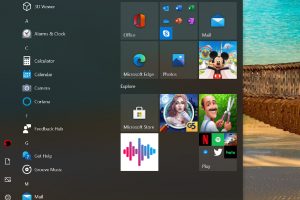