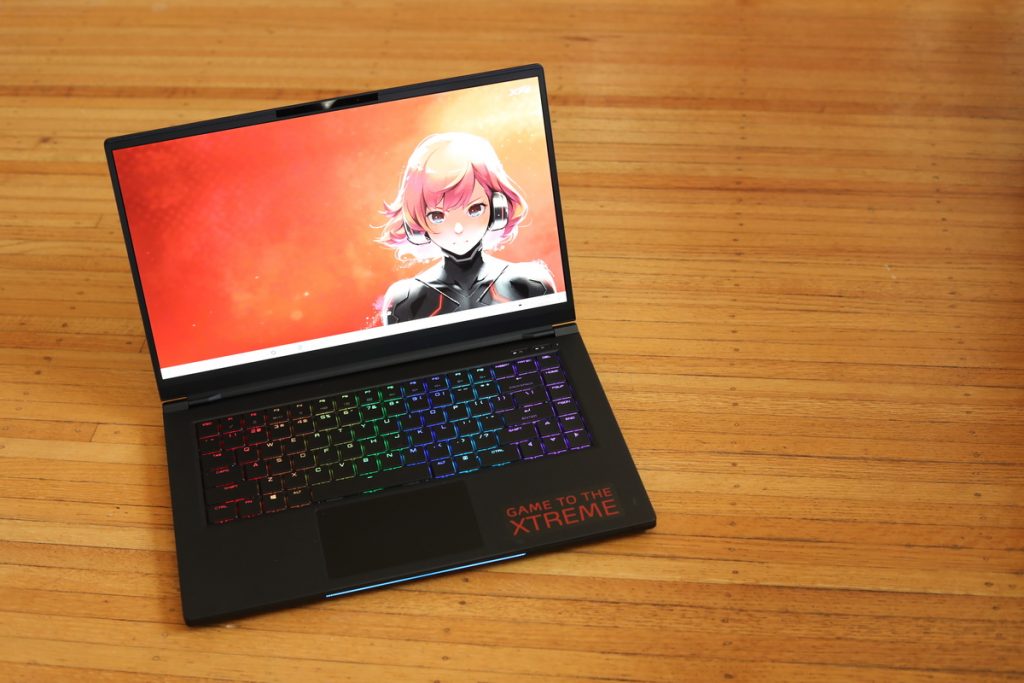 XPG Xenia 15: This Intel-designed laptop is light and fast

The XPG Xenia 15 may not look “new” to you if you’ve been conditioned to consider “old hardware” obsolete the day the new models come out. But it’s actually proof that prior-generation parts can be perfectly relevant, and even as fast as the latest generation of hardware.

The Xenia XPG 15’s main specs consist of the Intel 9th-gen Core i7-9750H and the  Nvidia GeForce RTX 2070 Max-Q. Both CPU and GPU are technically eclipsed by the newer 10th-gen Intel CPUs and Nvidia’s new Super line of RTX GPUs, but if you think about the power and thermal limitations of laptops, the picture gets more complex.

Another unusual aspect of this laptop is its branding. Flip the laptop over and you’ll see an Intel logo where you might expect to see XPG’s. XPG is a gaming subsidiary of memory and storage maker Adata), but in this case Intel did much of the design work of the laptop and then tasked Chinese white-label PC maker TongFang with producing it.

Intel has long developed laptop and other PC hardware, which it shares with various companies, which in turn add their own finishing touches. This gives smaller players an opportunity even though they could never pay for the development costs themselves. As a result, you will see other laptops that look a lot like the XPG Xenia 15.

What’s special about the XPG Xenia 15

Because XPG’s parent company is Adata, naturally the company slips its own SSD into the Xenia 15, a 1TB XPG SX8200 Pro. OEM versions of SSDs often offer less performance than their retail counterparts by using higher-density, but slower QLC NAND drives. Not in this case: The SX8200 Pro is a 3D TLC drive with an SLC cache and DDR3 memory. The warranty on the SSD is five years, which is longer than a typical OEM SSD.

The other part XPG adds is a pair of 16GB Adata DDR4/2667 modules. Yes, we know, 32GB seems excessive for a gaming laptop. XPG said it opted for a minimum of 32GB for “future-proofing.” XPG tries to sweeten the deal by saying the memory in the laptops use “hand-picked” Samsung dies, which are all rated with a CAS latency of 19. While it’s true very few laptop vendors ever state the latency of the RAM they use, we should point out that CL19-rated SO-DIMMS are easy to buy on the open market.

When you look at the whole spec list, you can see that if you set aside any bias toward last-gen parts, there’s nothing “wrong” with this configuration:

For ports, we’ll let the photos do the talking, but the main takeaway is you get just about everything you want. The first picture shows the spectacular Dell XPS 15 9500 next to the Xenia 15 for a size comparison. The right side of the Xenia 15 gives you two properly marked USB-A 5Gbps ports and an SD card reader. We have a longer story planned on SD card performance, but we’ll say speed of the Realtek card reader in the Xenia 15 is underwhelming. The unit is plumbed to the laptop’s PCIe, but it’s only USB 3.0, so we saw read speeds of about 91MBps and write speeds of 64MBps in Crystal Disk Mark 7, using a Sandisk Extreme Pro UHS-II SD card rated for 300MBps reads and 260MBps writes. The same card in the Dell XPS 15 9500 will reach 275MBps reads and 217MBps writes. So yes, if you’re copying a 40GB video to the Xenia, go grab a cup ‘o joe while it’s copying over.

The left side of the Xenia 15 features a third USB-A 10Gbps port and a seperate mic and headset jack. If you’re wondering why the Xenia 15 doesn’t use a single combo jack like the average laptop, we suspect it’s the gaming roots of the laptop. Gamers often want separate audio devices for streaming.

But wait, there’s more. To jam more ports into the laptop, on the back panel XPG gives you Gigabit ethernet, full-size HDMI 2.0, Thunderbolt 3 and a dedicated charging port.

There is a little bit of a missed opportunity with the charging system on the Xenia 15. The laptop features a 230-watt power brick, which is fairly standard for laptops with GeForce RTX 2070 Max-Q level of graphics. It seems unusually thick, however, as you can see below compared to the same wattage brick that Gigabyte and MSI use with their GeForce RTX 2070 Max-Q laptops. The good news is that despite its bulk, it is actually a little lighter at 1.7 pounds for the XPG brick, compared to 1.9 pounds for the MSI and Gigabyte packs.

One feature we would have liked to see with the Xenia 15 is support for USB-C charging. Asus does it on its ROG Zephyrus Duo, so you can leave that bulky brick at home and carry a tiny GAN USB-C charger. You wouldn’t want to play games or do anything strenuous for long on a 65-watt or 100-watt USB-C charger, but for normal use it’d be fine.

A lighter charger would be especially welcome with the Xenia 15 because it is, itself, spectacularly light for its class at 4.1 pounds. A typical 15.6-inch gaming laptop with GeForce RTX 2060 or higher graphics will push 4.5 pounds. Heck, even Dell’s XPS 15 9500, with a much less powerful GTX 1650 Ti, is 4.4 pounds. So yes, in this age, the Xenia 15 is awesomely light.

The 720 webcam for the XPG Xenia 15 is mounted on the top bezel and offers adequate quality. You might say it tends to expose a little cold to purple, but for a Zoom call does it really matter?

What is unusual—and welcome—is the support for Windows Hello biometric login using the infrared camera. Some gaming laptops have started to integrate fingerprint readers, but it’s even nicer to have the convenience of Microsoft’s facial recognition.

XPG said the keys approximate what a “brown”-class key feels like and offer 2mm of travel. There are also n-key rollover and per-key RGB lighting (of course). You get that very satisfactory crisp mechanical click feel, too, that makes our hearts sing.

Low-profile flat mechanical keys can sometimes be horrible to type on. Cooler Master’s SK621 was so bad that the company has offered to give out updated key caps to people who bought the keyboard. We had no such issues with the Xenia 15’s keyboard. The keys can be a bit wobbly, but we think it might just be worth it to have that click sound.

The XPG Xenia 15 features two bottom-firing speakers that sound, well, like what we’ve come to expect of most thin gaming laptops where every cubic inch counts. It’s clear XPG and Intel threw the speakers overboard and dragged them along the ocean floor for a few nautical miles. Are they as bad as the speakers on MSI’s GS66 Stealth? No, but they’re not much better. The audio sounds flat and lifeless, good for a “you’ve-got-mail” alert but that’s about it. After hearing the audio in the Dell XPS 15 9500, we know what’s possible in a thin platform if a laptop maker makes it a priority.

We didn’t have time to snap a shot of the insides of the Xenia 15, but the design features two SO-DIMM memory slots, two M.2 slots, and Wi-Fi card, all accessible by removing the bottom lid.

The XPG Xenia 15’s build quality reflects its generic origins. Who does straight-cut vents on laptops anymore? They work fine, but they look dated. More to the point, it uses a magnesium shell that may be a little too thin and light. Squeeze it hard, and the chassis will flex. I won’t say it feels flimsy, but it definitely doesn’t have that solid feel of an XPS 15 9500 or Razer Blade 15. At least it has RGB LEDs on front—that counts for something.