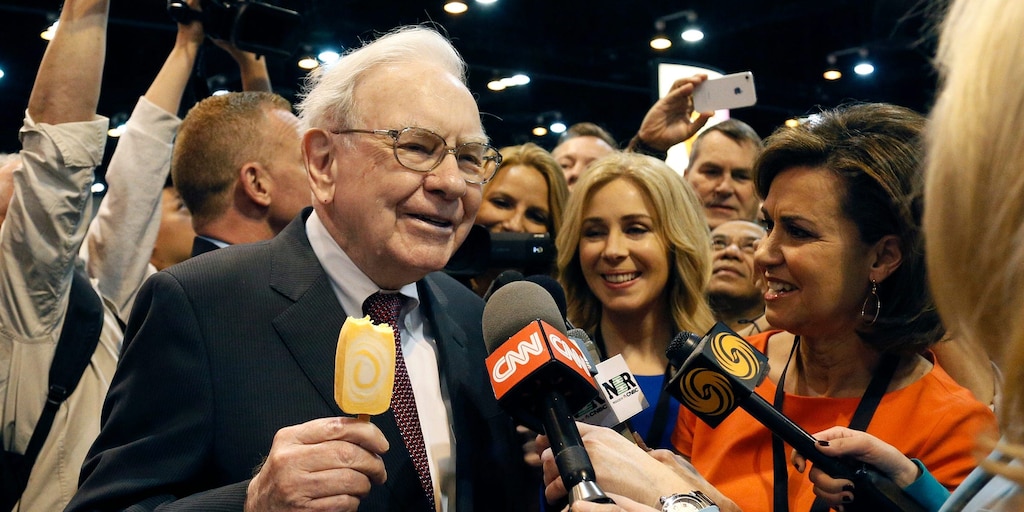 The legendary investor and Berkshire Hathaway boss, already the oldest and longest-serving CEO of a S&P 500 company, has plenty to celebrate:

In recognition of Buffett turning 90, here are five of his best comments and stories about birthdays:

Geico, one of Buffett’s oldest and most lucrative investments, has surpassed rivals such as Progressive and Allstate in terms of premium volumes over the years. Buffett wants the auto insurer to be number one in 10 years’ time.

Buffett reiterated his goal at Berkshire’s 2016 annual meeting, according to a transcript on Sentieo, a financial-research site.

“I hope on my 100th birthday that the Geico people announce to me that they passed State Farm,” he said. “But I have to do my share on that, too, by getting to 100.”

Buffett and his business partner, Charlie Munger, acquired See’s Candies for $25 million in 1972 and immediately put Chuck Huggins in charge.

In his 1999 shareholder letter, Buffett credited Huggins’ “fanatical insistence on both product quality and friendly service” for See’s generating $857 million in pre-tax income since Berkshire took over.

See’s pre-tax profit in millions was about 10% of Huggins’ age when he took over aged 46, Buffett said in the letter. That ratio soared to 100% by the time he turned 74, the investor continued.

“Having discovered this mathematical relationship — let’s call it Huggins’ Law — Charlie and I now become giddy at the mere thought of Chuck’s birthday,” he joked.

Buffett received a particularly nice birthday gift in 1983 when Mrs B, the 89-year-old owner of Nebraska Furniture Mart, agreed to sell the company to him.

“I think back to August 30, 1983 — my birthday — when I went to see Mrs B (Rose Blumkin), carrying a one and a quarter-page purchase proposal for NFM that I had drafted,” he recalled in his 2013 shareholder letter.

“Mrs B accepted my offer without changing a word, and we completed the deal without the involvement of investment bankers or lawyers,” Buffett continued.

“Though the company’s financial statements were unaudited, I had no worries,” he added. “Mrs B simply told me what was what, and her word was good enough for me.”

4. Business at a party

Buffett shared an example of Berkshire’s “carefully crafted and sophisticated acquisition strategy” in his 1996 shareholder letter.

The investor tried to get out of attending the 40th birthday party of his nephew’s wife, Jane Rogers, but agreed to go after learning he would be sitting next to Jane’s dad, Roy Dinsdale.

During the party, Dinsdale revealed he had attended a directors’ meeting at Kansas Bankers Surety, an insurance firm that Buffett had long admired. Buffett told Dinsdale to let him know if the company ever came up for purchase.

Buffett received a letter from Dinsdale a couple of weeks later that contained KBS’s financial information. He called Dinsdale the next day to offer $75 million for the company, and the pair soon struck a deal.

“I’m now scheming to get invited to Jane’s next party,” Buffett joked.

If anyone owns a company that meets Berkshire’s requirements “and if I fail to make the next birthday party you attend … give me a call,” he added.

Buffett famously hires and trusts top-notch managers to run Berkshire’s various businesses, freeing him to focus on allocating capital across the company.

He illustrated the point in his 1990 shareholder letter, using a story about his granddaughter Emily’s fourth birthday party a few months earlier.

Beemer the Clown asked Emily to wave a magic wand over a box of wonders.

“Loose handkerchiefs went in and, upon a magisterial wave by Emily, emerged knotted,” Buffett said. “After four such transformations, each more amazing than its predecessor, Emily was unable to contain herself.”

“Her face aglow, she exulted: ‘Gee, I’m really good at this.”

“That sums up my contribution to the performance of Berkshire’s business magicians,” Buffett added, listing several superstars including Mrs B’s family and Huggins.

“They deserve your applause.”