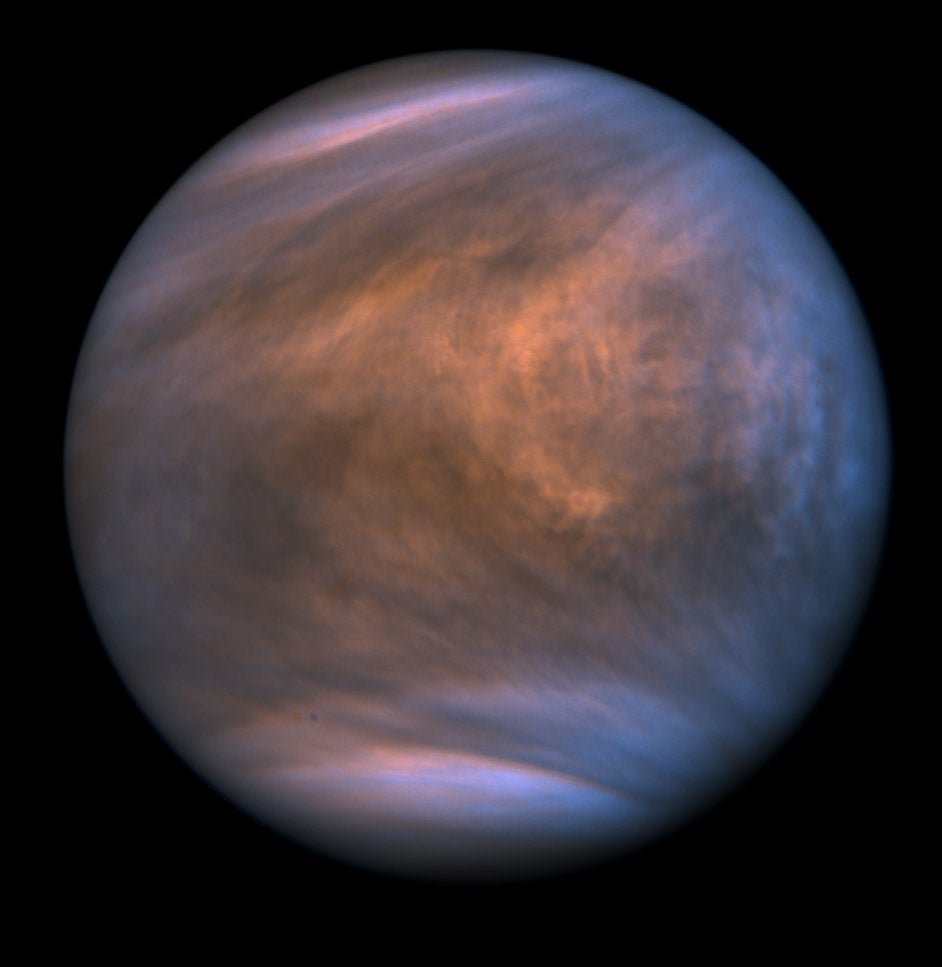 There is something funky going on in the clouds of Venus. Telescopes have detected unusually high concentrations of the molecule phosphine—a stinky, flammable chemical typically associated with feces, farts and rotting microbial activity—in an atmospheric layer far above the planet’s scorching surface.

The finding is curious because here on Earth, phosphine is essentially always associated with living creatures, either as a by-product of metabolic processes or of human technology such as industrial fumigants and methamphetamine labs. Although toxic to many organisms, the molecule has been singled out as a potentially unambiguous signature of life because it is so difficult to make through ordinary geological or atmospheric action.

Swathed in sulfuric acid clouds and possessing oppressive surface pressures and temperatures hot enough to melt lead, Venus is a hellish world. But the particular cloud layer where the phosphine is present happens to be relatively balmy, with ample sunlight and Earth-like atmospheric pressure and temperature. The results will have to be carefully vetted by the scientific community. Yet they seem likely to spark renewed interest in exploring our sister planet next door.

“It’s a really puzzling discovery because phosphine doesn’t fit in our conception of what kinds of chemicals should be in Venus’s atmosphere,” says Michael Wong, an astrobiologist at the University of Washington. Planetary scientist Sanjay Limaye of the University of Wisconsin–Madison agrees. “The bottom line is we don’t know what’s going on,” he says. (Neither Wong nor Sanjay were involved in the work.)

After the sun and moon, Venus is the brightest object visible to the naked eye in Earth’s sky. For thousands of years, people told stories about the glittering jewel that appeared around sunrise and sunset. Venus’s brilliance is what made it attractive to Jane Greaves, a radio astronomer at Cardiff University in England. She typically focuses her attention on distant newborn planetary systems but wanted to test her molecular identification abilities on worlds within our cosmic backyard.

In 2017 Greaves observed Venus with the James Clerk Maxwell Telescope (JCMT) on Mauna Kea in Hawaii, searching for bar code–like patterns of lines in the planet’s spectrum that would indicate the presence of different chemicals. While doing so, she noticed a line associated with phosphine. The data suggested the molecule was present at around 20 parts per billion in the planet’s atmosphere, a concentration between 1,000 and a million times greater than that in Earth’s atmosphere. “I was stunned,” Greaves says.

Phosphine is a relatively simple molecule containing one phosphorus atom and three hydrogen atoms. It is known to reek of garlic or rotting fish, though by the time it reaches concentrations where humans can smell it, it is likely to cause lung damage. In the pilot episode of the series Breaking Bad, the character Walter White prepares phosphine gas to knock out two assailants who are threatening him.

Yet making the substance is not as easy as seen on TV. Phosphorus and hydrogen “hate each other,” says Clara Sousa-Silva, a molecular astrophysicist at the Massachusetts Institute of Technology and a co-author of a study reporting the phosphine finding. “Hydrogen has much better stuff to do, and phosphorus would rather bond with oxygen. But if you throw enough energy at them, they can come together and be stable in some environments.”

The gas giants Jupiter and Saturn contain phosphine because they have hot interiors where it can be energetically favorable to produce the molecule. Venus’s runaway greenhouse atmosphere, by contrast, is full of oxygen-containing chemicals such as carbon dioxide that would normally soak up phosphine’s phosphorus. For the molecule to be present at any level, let alone the amounts Greaves was seeing, was a genuine head-scratcher.

Meanwhile, Sousa-Silva has built her career around studying phosphine—she goes by the handle @DrPhosphine on Twitter—predicting how it might appear in the atmosphere of a distant alien exoplanet. “I was considering these exotic worlds light-years away—super-Earths, tropical planets, sewage planets,” she says. “And the whole time, it was just here next door.”

The researchers and their colleagues made follow-up observations of Venus with the more powerful Atacama Large Millimeter/submillimeter Array (ALMA) in Chile last year, again detecting the atmospheric signature of phosphine. They then tried to come up with every possible reason for the strange molecule’s existence, including volcanic activity, lightning strikes and even meteorites breaking up in the planet’s atmosphere. “I think the best routes we could find fell short by a factor of about 10,000,” Greaves says.

Of course, there might be additional pathways to making phosphine the team has not yet considered. But after exhausting their imaginations seeking out abiotic explanations, the researchers felt forced to acknowledge one other possibility in their paper, which appeared today in Nature Astronomy: the molecule could be made by life on Venus, just as life is the main way it manifests on Earth.

Life in the Clouds

Astrobiologists have long been enamored with Mars, a dry, rocky planet with conditions not all that dissimilar to those of Earth. More recently, they have become moonstruck by icy, potentially habitable worlds in the outer solar system, such as Saturn’s geyser-spewing satellite Enceladus and Jupiter’s oceanic moon Europa. But despite its drawbacks, Venus has not been entirely neglected by scientists speculating about life’s extraterrestrial abodes.

From 50 to 60 kilometers above the Venusian surface, there is an atmospheric layer with pressure equal to that of sea level on Earth and temperatures between zero and 50 degrees Celsius. If not for the sulfuric acid clouds, one might call this layer “hospitable.” Even so, there are terrestrial organisms that will happily tolerate such extremely acidic conditions in hot springs or other environments. This relatively clement region is precisely the place where the phosphine has been found.

Since the 1960s, astronomers have also noticed that Venus’s clouds are not reflecting as much of the sun’s ultraviolet light as they should be: an unknown something in the atmosphere seems to be preferentially absorbing that light instead. This observation led the late astrobiologists Harold Morowitz and Carl Sagan to propose that energy-hungry photosynthetic organisms might be the culprit. Meanwhile, other researchers have never stopped searching for alternative abiotic explanations. Recent evidence suggests that the planet is still geologically active. And a model released earlier this year showed that Venus might have had an ocean for nearly three billion years—one that only disappeared a few hundred million years ago. Conceivably, life could have arisen on Venus when our sister world was much more Earth-like, only becoming airborne as the runaway greenhouse effect rendered the planet’s surface uninhabitable.

“I’ve always thought it’s as plausible to have life in the clouds of Venus as to find it in the subsurface of Mars,” says David Grinspoon, an astrobiologist at the Planetary Science Institute, who was not involved with the study. “Each is an environment that could be habitable but isn’t guaranteed to be.”

Yet an almost equally good case can be made for Venus’s clouds being inimical to life as we know it. Microbes have been found floating around in Earth’s atmosphere, but none are known to exclusively spend their entire life cycle there. All of them have to land eventually, and Venus’s surface seems too inhospitable a place to make for a good reservoir.

The Venusian area under consideration is also 50 times more arid than Chile’s Atacama Desert, the driest place on our planet. And although it is true that living things have found good ways to thrive in aqueous environments tinged with traces of sulfuric acid, conditions on Earth’s evil twin essentially reverse that formula: its cloud layer is mainly sulfuric acid with just a bit of water.

Venus remains an underexplored place. “Despite it being literally the planet next door, there are many mysteries that still need to be solved,” Wong says. In order to rule out all nonliving explanations for the creation of phosphine, researchers will have to learn a great deal more about the planet itself, including its chemistry, geology and atmospheric physics, he adds.

Another issue might be the detection of phosphine itself. Noisy ripples that make resolving any particular line somewhat challenging are superimposed on Venus’s spectrum in the team’s data. These wavy structures could mimic a phosphine signature, says Bruno Bézard, a spectroscopist at the Paris Observatory. “I don’t see a strong argument to say it’s not a ripple,” he says.

Greaves counters that the odds of finding the same signal using two separate facilities, JCMT and ALMA, is statistically small. Nevertheless, she and her colleagues are hoping to do additional observations at other wavelengths, such as infrared, to further test their initial results. Making higher-resolution maps of where the phosphine appears and seeing if it exhibits any kind of seasonal variation could also help tie it to biological processes.

In many ways, the unexpected finding appears analogous to the 1996 announcement of potential microscopic life in an ancient Martian meteorite designated Allan Hills 84001. Along with structures that looked like fossil bacteria, the sample contained an unusual form of iron crystals that appeared identical to those produced by microbial creatures on Earth. It took many years before researchers were able to figure out an inorganic explanation for those crystals.

Although life did not pan out as an explanation in that case, “it got everybody thinking, ‘Well, why not?’” Grinspoon says. “Everything we know about Mars is consistent with that possibility. That led to a huge movement and catalyzed astrobiology as a field.”

The phosphine finding might play a similar role in getting planetary scientists to pay more attention to Venus. In recent years, there has already been a contingent of researchers clamoring for more missions to our sister planet. Russia has proposed sending its Venera-D mission, which would include an orbiter and lander, to Venus as early as 2026. The European Space Agency similarly has the EnVision spacecraft on its drawing board, and it could reach its target in the next decade.

NASA is currently considering proposals for two different Venus missions for funding under its Discovery Program: the orbiting VERITAS and DAVINCI+. The latter would fly the first probe through Venus’s atmosphere since the Soviet Vega balloons of 1984. A selection is expected sometime next year.

For her part, Sousa-Silva is hoping the rest of the scientific community will subject her and her colleagues’ methods and conclusions in the study to rigorous scrutiny. “I’m confident our models and data reduction are good, but I’m still skeptical,” she says. “I expect the world to come and point out the mistakes I’ve made.”

Such debates are important for science because similar conundrums are going to unfold every time someone claims evidence for life on a planet in our solar system or beyond, Sousa-Silva says. “I think it’s very hard to prove something like this,” she adds. “We have an innate desire to find life, and then we have our own rational minds that say, ‘None of this is sufficient evidence.’ We want to not be alone, but we also want to not be wrong. Sometimes those two things are hard to make coexist.”