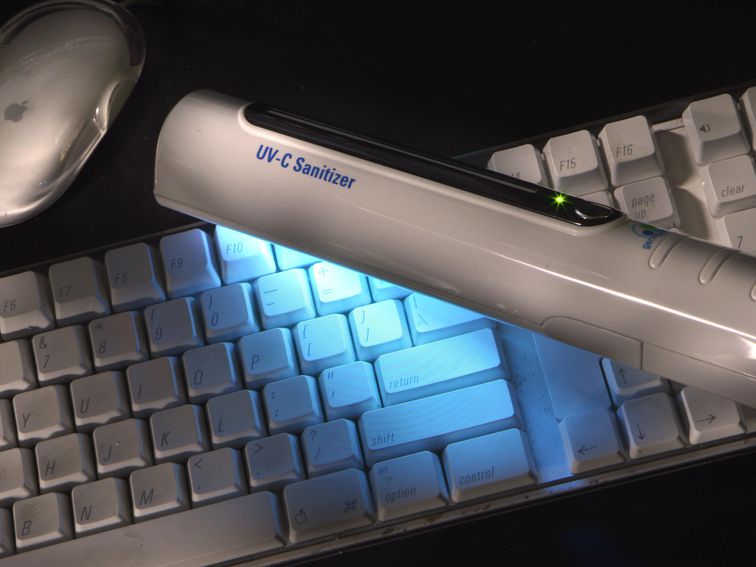 For the most up-to-date news and information about the coronavirus pandemic, visit the WHO website.

The coronavirus pandemic has businesses and homeowners alike seeking out anything that might make shared spaces feel safer and more sanitary. That has some consumers and product manufacturers turning to ultraviolet, or UV light as a potential solution — specifically, a type of UV light called UVC, which has extra-short wavelengths and enough energy to alter the DNA and RNA of organic cells, which stops them from reproducing.

UVC light has a long history as a proven disinfectant at places like hospitals and laboratories, and businesses including airlines, hotels and retail spaces have been relying on the invisible light more than ever in 2020. The pandemic has also produced a flood of cheap, unregulated, consumer-facing devices for use in the home, including handheld UVC wands that look like lightsabers.

Devices like those are nothing new, but the pandemic-borne surge of interest in them is raising alarms, because UVC light is a known carcinogen, and even a few moments of direct exposure can be hazardous to the eyes and skin.

Now, as research into UVC and the coronavirus continues, regulators, industry leaders and safety science professionals are urging caution. Here’s what you need to know — the science, the safety risks and everything experts say you should take into consideration before bringing any UVC-powered light source into your home.

How this drone can help stop the spread of coronavirus

Man-made UVC light is just as intense, and just as good at ionizing organic molecules and altering their DNA and RNA. For years, scientists and medical professionals have used the invisible light as a natural disinfectant against bacteria and viruses, including the coronaviruses that cause illnesses like SARS and MERS. While scientists are still working to determine the full efficacy of UVC light against SARS-CoV-2, the coronavirus that causes COVID-19, the early indications are promising — enough so that the FDA issued guidance in March that it “does not plan to object” to any previously cleared sterilization or disinfectant devices updating their marketing to indicate that they combat COVID-19.

“Because disinfection kills most recognized pathogenic microorganisms, it can generally be inferred that sterilization and disinfection should minimize the viability of SARS-CoV-2 on surfaces and in the air in confined spaces,” the FDA wrote. That gave manufacturers a green light to begin marketing potential COVID killers.

Now, interest in UVC light is surging. Signify, formerly Philips Lighting, which has been producing UVC lighting for more than 35 years, tells CNET that interest in the lights has spiked enough to justify an eight-fold increase in production since the start of the pandemic. In Kansas, Digital Aerolus developed a UVC drone that can fly through contaminated spaces disinfecting everything it comes across. Here in Kentucky, Big Ass Fans recently released a UVC ceiling fan designed to disinfect air as it circulates throughout the room.

Those are all high-end, commercial-grade products — but interest in cheaper, simpler UVC products that people can bring into their homes is on the rise, too. That’s where safety experts are beginning to sound the alarms.

Run a quick search for “UVC” on Amazon or at Walmart and you’ll find page upon page of products that promise to sterilize your home. With names like “Germ Guardian,”https://www.cnet.com/”Bio Shield,” and “The Germ Reaper,” most claim to kill 99.9% of viruses and other pathogens they come into contact with.

“Under the pandemic, we’ve seen a great increase in the interest around UV germicidal-type devices, including those that are now more consumer-facing,” says Todd Straka, global industry director of lighting at Underwriters Laboratories, where UVC products are tested for safety certification. “These can be very dangerous if you don’t use them properly.”

Straka and other safety science experts at UL recently teamed with the National Electrical Manufacturers Association and the American Lighting Association to address these concerns in a two-page position paper (PDF) outlining the potential risks of using uncertified U-C devices. Straka calls the situation “a major safety issue,” and his counterparts at NEMA and the ALA agree.

“We know that UVC is a proven way to help eliminate dangerous bacteria and viruses in water, air and on surfaces,” says Karen Willis, NEMA’s industry director for lighting systems. “Nevertheless, in the midst of COVID-19, we are concerned about proliferation of UVC disinfecting devices being sold with uncertain safety features and incomplete operating instructions.”

One potential source of risk is older, mercury-based UVC lamps. Lamps like those emit ozone that can be toxic to the lungs — but newer, UVC LED lamps are a potential hazard, as well. The biggest concern, UL’s experts say, are uncontained devices like light wands that could potentially expose a user’s eyes or skin to the invisible UVC light at close range, causing damage. UL is unwilling to certify wands like those due to the high risk in an uncontrolled home setting.

“This is a hazard you can’t see,” explains Pamela Gwynn, principal engineer for UL’s Life and Health Sciences related to medical equipment. “They’re not toys. They’re not instantaneous. There has to be some time for the device to be in place for it to be able to do the work it’s intended to.

“The damage that’s being done is also not instantaneous,” Gwynn adds. “So it may take several days before you realize you’ve damaged your eyes or caused burns on your skin.”

Many of the products currently being sold seem to downplay that risk, or ignore it altogether. One of the sponsored products at the top of Amazon’s search ranks is a UVC light wand from a company headquartered in Shenzhen, China called 59S. The product features a child safety lock and an autoshutoff feature if the wand isn’t shining downward, but a misleading chart at the top of the product listing comparing the wand’s LEDs to other types of UV lamps wrongly claims that the light comes with no side effects. You have to scan the fine print in one of the product photos to find a warning about exposure to the eyes and skin — it isn’t printed anywhere else in the listing, though it does say you should wear protective goggles. And, as an observant CNET reader pointed out, Amazon has it categorized under “Hand Sanitizers.”

Another wand listed on Walmart features no child lock or autoshutoff at all, and the listing never warns of any hazard to the eyes or skin — though it does boast of lights that are twice as intense as a previous model. There’s no mention of safety certification other than 3C certification via Chinese regulators, either.

The manufacturer does make sure to specify that the wand is certified waterproof.

“Can be put in the fish tank,” the listing notes.

When asked about its policies towards listings like those, Walmart asked for specific examples but did not respond further once provided with them. Amazon didn’t respond to a request for comment, though its product listings note that the company assumes no liability for inaccuracies or misstatements about products.

In an age when Clorox wipes are a precious commodity, sanitizing UVC light might seem like a promising alternative. But experts urge caution for anyone tempted to bring the tech into their home.

“UL has made a conscious decision not to certify the consumer-facing, portable, handheld wand-type devices due to the inability to manage the risks,” Straka tells CNET.

In the meantime, research continues into the potential efficacy of UVC light against the virus that causes COVID-19. Some companies that sell UVC products, like Signify and Big Ass Fans, are putting those products to the test at third-party research labs to verify effectiveness against SARS-CoV-2. Researchers at Boston University found that Signify’s wall-mounted UVC lights killed up to 99% of the virus within seconds; the company is now broadening its portfolio of UVC luminaries for commercial environments. Similar tests for the Haiku UVC ceiling fan from Big Ass Fans are expected to produce final results by the end of August.

Elsewhere, one recent study out of Columbia University looked at “far-UVC” light that shines at a less intense wavelength — still strong enough to zap viruses, but potentially incapable of penetrating eye and skin tissue.

“At this point, though there are some promising studies, it’s not yet widely determined that [far-UVC light] is indeed safe,” says Gwynn. “It’s still just considered UV, and there’s no exception that [the far-UVC] wavelength is not a concern.”

“There are emerging studies to understand the effectiveness of UVC against COVID-19,” Straka adds, “but in terms of research, there’s a lot still pending on that. So I would caution consumers … if they’re seeing really robust claims about efficacy, to keep in mind that that is still very much in the works.”