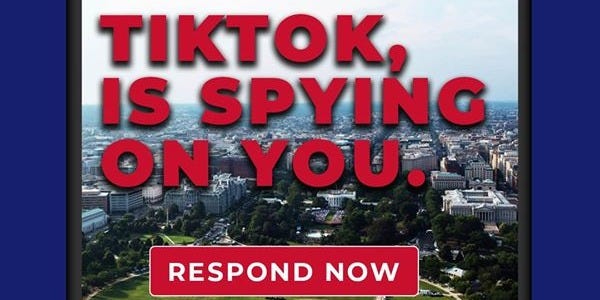 As Donald Trump considers banning TikTok, his political campaign has started running ads on Facebook and Instagram accusing the China-based platform of “spying” on its users.

More than 100 iterations of ads were launched Friday encouraging Facebook users to sign a petition banning TikTok in the US. The ads, first spotted by New York Times reporter Taylor Lorenz, come as the US government threatens to instate a country-wide ban on the viral video-sharing app over its ties to China.

Facebook removed one version of the anti-TikTok ad on Friday evening. The ad in question includes a graphic with “yes” and “no” checkboxes, which appears to be a violation of Facebook’s policy against ads with “nonexistent functionality.” Facebook did not respond to Business Insider’s request for comment.

Another anti-TikTok ad tells users: “Protect our kids from China.”

TikTok’s roots in China — where the app’s parent company, ByteDance, is located — have long raised questions from US lawmakers and security experts about how much access and influence the Chinese government is afforded over user data and content moderation. Concerns over the TikTok-China connection have skyrocketed in recent weeks after India decided to instate its own ban on the app earlier this month.

The campaign’s political ads also claim that “TikTok has been caught red-handed by monitoring what is on your phone’s clipboard.” The accusation is based on research from March showing how apps are able to access content stored on the clipboard — the copy-and-paste feature — of users’ iPhones and iPads. TikTok was only one of the dozens of the apps caught spying on iPhone clipboards, including LinkedIn and Fox News. ByteDance has since said it will stop accessing clipboard content.

In recent weeks, the Trump campaign has also taken out ads against Twitter and Snapchat, claiming they’re “attempting to silence” the president.

In early July, both President Trump and Secretary of State Mike Pompeo publicly said they were considering a TikTok ban in the US: Trump said the ban would be a way to punish China over its role in the coronavirus pandemic, while Pompeo cited national security concerns. On Thursday, White House economic adviser Larry Kudlow told reporters he expected TikTok to “pull out of the holding company which is China-run and operate as an independent American company.”

Since TikTok launched in the US in 2018, the app has successfully been able to brush off lawmakers’ calls for investigations and national security experts’ warnings. Most recently, TikTok launched a content advisory council to guide policy changes and appointed a US-based CEO in June to show it was distancing itself from its Chinese roots.

But TikTok has also run afoul of the Trump campaign for reasons beyond its ties to China. Swarms of TikTok teens and K-pop fans were credited last month with signing up en masse for tickets to a major Trump rally in Tulsa, Oklahoma. Instead of the big comeback that the Trump campaign advertised, attendance at the rally was considerably lacking.

TikTok’s reported influence on the Tulsa rally demonstrates how the app has grown into a social media powerhouse, establishing itself as a staple of internet culture and social interaction for Generation Z. The app has more than 2 billion global downloads, and an estimated US userbase at as high as 80 million. It outperforms US-based apps with younger audiences such as Snapchat and Instagram in both new downloads and time spent.

The imminent threat of TikTok disappearing from the US has already signaled panic among users and creators, and has led attempts by tech companies to capitalize on the chaos to lure the app’s loyal following to their competing platforms.