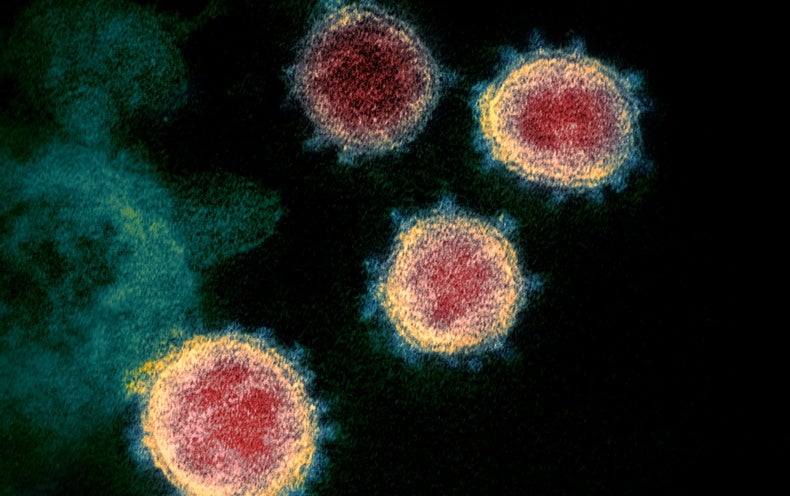 The hubbub around mutations in the virus that causes COVID-19—and how they might make it more infectious—has been around since the early phase of the pandemic. A preprint study about a particular mutation involving the “spikes” studding the SARS-CoV-2 pathogen had previously drawn attention, and that investigation has now been peer-reviewed and published in Cell. The paper details a change in one amino acid in the virus that may have made it more infectious. But virologists are far from a consensus about the possible role of this mutation.

The paper indicates that a single amino acid change from D (aspartic acid) to G (glycine) on the SARS-CoV-2 spike protein (which such viruses use to grab onto human cells) is the key to how infectious the pathogen is. “The spike protein has a critically important role in the biology of the virus,” says Bette Korber, a computational biologist at the Los Alamos National Laboratory and lead author of the new paper.

Korber and her colleagues came to this conclusion after employing multiple approaches to examine the two strains. First, they performed a statistical analysis that showed how the mutated virus—often referred to as the “G strain”—achieved dominance across multiple continents, outperforming the coexisting original version of SARS-CoV-2, or “D strain.” Then the researchers tested the amount of the virus in individuals with COVID-19 at the Sheffield Teaching Hospitals NHS Foundation Trust in England. The results showed that the G strain produced more of the virus in the human body than the D strain. But the former did not lead to a higher hospitalization rate, meaning it apparently did not cause more severe illnesses. Lastly, the team members created “pseudotype” pathogens by embedding SARS-CoV-2 spike proteins, containing either D or G amino acids, into other disease-causing viruses. They tested these pseudotype viruses by infecting human cells in a lab dish, and the result suggested that the G-bearing one was more infectious. Examining cells in a dish, however, is not the same as testing them using “multiple cell types with an immune system in a human body,” says Emma Hodcroft, a molecular epidemiologist at the University of Basel in Switzerland, who was not involved in the study. “We just have to be really careful with how far we take the conclusions.”

The study authors say they are not arguing that current vaccine and therapeutic efforts, most of which are based on the original D strain, will be useless. “But it means that we need to carefully check [the effects of the mutation] and make sure there is no impact,” Korber says. “You want to be certain [therapies and vaccines] work well against today’s virus, not just yesterday’s virus.”

Meanwhile some scientists worry the results are being overinterpreted. Nathan Grubaugh of Yale University and his colleagues published another paper in Cell on the same day as Korber’s study to lay out limitations to—and alternative explanations for—its findings. Others debated Korber and her colleagues’ conclusions via social media when their paper was first released as a preprint.

Grubaugh’s paper points out that when one strain is simply more prevalent, that does not always mean it is more infectious. The researchers write that the higher frequency of the G strain “may be explained by chance.” They add that “there is good evidence that for SARS-CoV-2, a minority of infections are responsible for the majority of transmission” and that most of the infections that seeded outbreaks may have happened to involve the G strain. It is also possible that strain (which emerged in Europe) traveled farther and more frequently to other parts of the planet, leading to its global dominance. “That’s kind of the disentangling that’s really difficult,” Hodcroft says, noting that there are too many factors at play.

As for the amount of virus detected in the human body, the method Korber’s team used “doesn’t measure infectious virus, and that’s all that matters for transmission,” says Vincent Racaniello, a virologist at the Vagelos College of Physicians and Surgeons at Columbia University, who was also not involved in the either of the two Cell papers. In viral infections, he says, “you have a period where you’re actually producing infectious virus. But then the infection basically stops. And then what are left are degraded viruses that persist in your body for a long time.” The technique employed by Korber and her colleagues can detect degraded viruses, “so that’s not a good enough experiment to prove that this is driving transmission,” he adds.

Whether the G strain could affect the efficacy of potential vaccines and therapeutics is still unknown. The paper by Korber’s team shows that antibodies from people who had been infected with SARS-CoV-2 fight against both strains. “That was a really encouraging step, although more work needs to be done,” she says.

The debate over the newly identified mutation and its implications will likely continue, because there are several preprint papers that suggest the G strain might be more infectious. But Korber’s study is the only one to do so that has been peer-reviewed so far.

“These back-and-forths between scientists, they really are normal, and this is how science evolves,” Hodcroft says. “It isn’t an indication that all of science is in disagreement…. If you [surveyed] scientists, they would give you the same general ideas about the virus.”

“I’m not saying that what they’re suggesting is not plausible,” Racaniello says. “This could be proven one day, and I would be fine with that.”