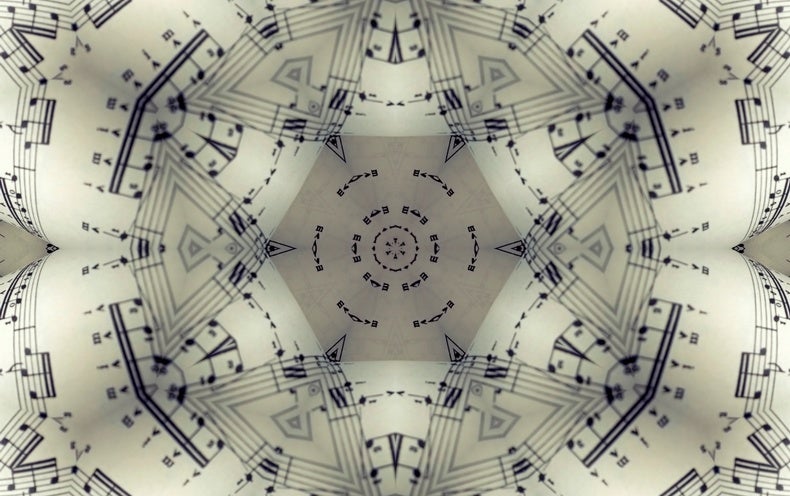 What, exactly, makes music to the ears? Time will tell, according to a new study of five centuries’ worth of compositions.

Using techniques derived from statistical mechanics—typically used to study large groups of particles—a team of physicists has mathematically measured the “time irreversibility” of more than 8,000 pieces of Western classical music. Published in Physical Review Research in July, their study quantifies what many listeners intuit: noise can sound the same played forwards or backwards in time, but composed music sounds dramatically different in those two time directions.

Time irreversibility—the existence of an “arrow of time”—is a concept drawn from fundamental physics, first formulated in 1927 by the British astronomer Arthur Eddington. But it is meaningful in many contexts, says Lucas Lacasa, a physicist at Queen Mary University of London and a co-author of the study. One can see it in action over breakfast: think of the implausibility of unscrambling an egg and returning it to a pristinely pieced-back-together shell. But until now, Lacasa says, it “hasn’t been measured at all in music.” Lacasa became interested in analyzing music through conversations with co-authors Gustavo Martínez-Mekler, of the National Autonomous University of Mexico, and Alfredo González-Espinoza, of the University of Pennsylvania, both of whom are physicists and musicians. By finding patterns across large bodies of composed music, they were hoping to find hints as to what makes a successful composer.

Compared to systems made of millions of particles, a typical musical composition consisting of thousands of notes is relatively short. Counterintuitively, that brevity makes statistically studying most music much harder, akin to determining the precise trajectory of a massive landslide based solely on the motions of a few tumbling grains of sand. However, for this study, Lacasa and his co-authors exploited and enhanced novel methods particularly successful at extracting patterns from small samples. By translating sequences of sounds from any given composition into a specific type of diagrams or graphs, the researchers were able to marshal the power of graph theory to calculate time irreversibility.

This is far from the first statistical study of music. In his 1963 book Formalized Music, composer and music theorist Iannis Xenakis used matrices and differential equations to buttress arguments about the nature of music and musical composition. Boldly, he posed that “much like a god, a composer may … invert Eddington’s ‘arrow of time.’” But confirming this contention proved elusive. This study, however, validates the claim—most compositions studied were found to follow an arrow of time.

Systems that are time reversible, under statistical analysis, seem the same when the arrow of time is flipped. The unstructured static hiss of white noise is one example. A different kind of noise prevalent in biological systems, dubbed “pink noise,” is also time reversible, and by certain statistical measures is almost indistinguishable from music. Specifically, when analyzing how much power each frequency component within a musical piece tends to have, scientists find the same distribution as in pink noise. Consequently, music has been accepted to be a type of pink noise.

The new study challenges this association, demonstrating that despite such basic similarities music has more structure than pink noise, and that this structure is meaningful. “Irreversibility gives you an idea of change in time; it approaches the idea of a narrative,” Martínez-Mekler says. Music being time irreversible, then, might reflect a composer’s effort to tell a story through the progression of notes.

Time irreversibility is related to a measure of disorder that, in physics, is called entropy. The composition having the most entropy would be a strictly random shuffle of sounds. It would also look the same—fully disordered—in all time directions, thus displaying no arrow of time. Conversely, the most time irreversible composition would be that which is the least random, possessing the least amount of entropy and the most structure. In this sense, measuring time irreversibility might reflect how singular a particular composer’s style is—the difference, say, between the gaudy violinist Nicolo Paganini and the melancholy lutenist John Dowland.

González-Espinoza, Martínez-Mekler and Lacasa wondered whether the time irreversibility score their analysis assigned to each composer could accurately reflect the aesthetic properties of that composer’s music. Past studies of music as pink noise spurred similar questions. To be enjoyable, it seems, music must strike a balance of predictability and surprise—a property pink noise is considered to possess. “The ordered way in which we create music is sort of an optimization process” says Jesse Berezovsky, a physicist at Case Western Reserve University who was not involved with the study. He has also used statistical mechanics methods to study music, finding that its rules emerge at the middle ground between dissonance and complexity. In a time irreversible music piece, the sense of directionality in time may help the listener generate expectations. The most compelling compositions, then, would be those that balance between breaking those expectations and fulfilling them—a sentiment with which anyone anticipating a catchy tune’s “hook” would agree.

At the same time, interpreting statistical results can be incredibly complicated. Elizabeth H. Margulis, director of the Music Cognition Lab at Princeton University, cautions that only melodies were considered in the study. She also raises the issue of cultural factors; listeners from different cultures perceive music differently. As Berezovsky explains, physicists often make simplifying assumptions to capture the essence of otherwise intractably complicated systems. This works well for studying the statistical mechanics of collections of atoms, but may have limited use for music, which is, for many, more than just a collection of sounds. “Quantitative tools are essential” to statistical studies of music, Margulis says, but combining them with “sensitive cultural insight is more likely to produce useful results.”

Martínez-Mekler is excited about how much more there is to learn. For one, the statistical tools he and his co-authors developed could be applied to a wealth of more contemporary, more global compositions. Echoing Margulis, he would like to consider harmony and rhythm, in addition to melody, in future analyses.

“Music is a very complicated phenomenon that emerged from many different interactions or constructions in society,” González-Espinoza says, acknowledging the complexities inherent to its study. But he trusts that structures we find pleasing in music reflect something about the way we hear our own thoughts play inside our heads. This research has only just started to demonstrate that, through composition, great musicians translate some of the patterning of our minds into the orderliness of music.