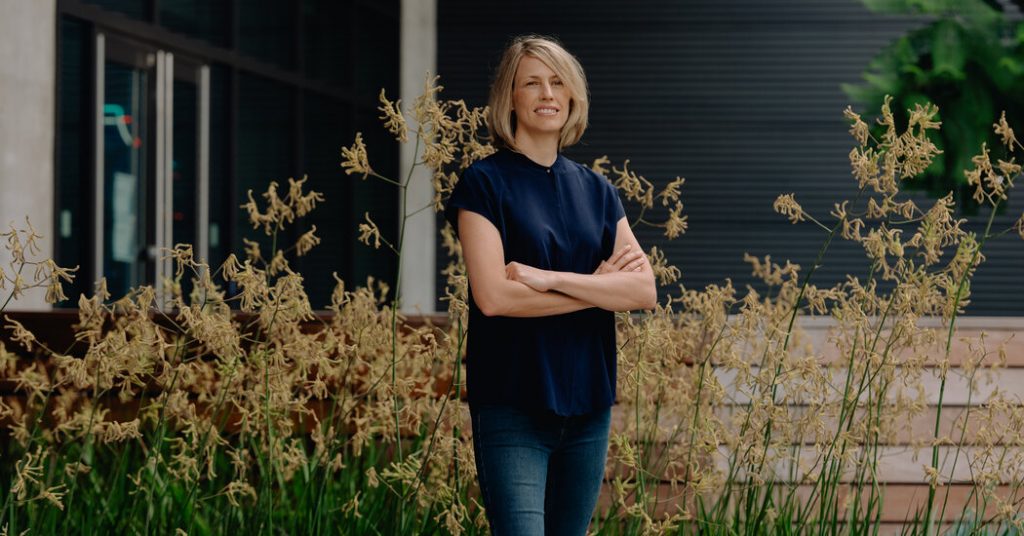 Six weeks ago, as TikTok grappled with escalating tensions between the United States and China, the social media app’s top executives huddled together to figure out their next steps.

Vanessa Pappas, 41, was worried. TikTok’s North American business, which she has run since 2018, was dealing with an uproar. President Trump had threatened to ban TikTok because of its Chinese owner, ByteDance, and many of the more than 100 million people who use TikTok in the United States were up in arms.

So in the early hours of Aug. 1, Ms. Pappas recorded a 59-second video from her home office in Los Angeles to calm the creators on TikTok and its fans. “We’ve heard your outpouring of support, and we wanted to say thank you,” she said in the video, which quickly went viral under the hashtag #SaveTikTok. “We’re not planning on going anywhere.”

Ms. Pappas is now repeating that message as she lands in an even hotter hot seat. Last month, Kevin Mayer, TikTok’s chief executive, said he was leaving the company, citing its uncertain political status. Ms. Pappas was appointed TikTok’s interim global head, just as the app faces an even murkier future.

Under an executive order from President Trump, ByteDance must essentially strike a deal to sell off TikTok’s U.S. operations by Sept. 20; it will have a few weeks after that to close a sale. Yet after weeks of negotiations with potential buyers such as Microsoft, Walmart and Oracle, the discussions were thrown into disarray when the Chinese government signaled that it would weigh in on TikTok’s future.

In a recent 30-minute interview over Zoom from her home, Ms. Pappas said TikTok’s predicament was “unique” and described what it was like to navigate it through “a challenging time.” She declined to discuss specifics about TikTok’s deal talks and said she was not involved in them.

Instead, Ms. Pappas said, she is focused on what TikTok’s future could look like if the app’s ownership is bifurcated. Most of all, she said, she is doubling down on putting TikTok’s community of creators and users — ranging from those who post videos of cake decorating to those who break dance — first. Ms. Pappas later added that she regularly talked to Zhang Yiming, ByteDance’s founder and chief executive, about all of these issues.

To focus on its community, TikTok in July formed a Creator Fund, where creators can earn cash for views, starting with $200 million. And with the pandemic forcing people indoors for the foreseeable future, Ms. Pappas said she and her team were working on making TikTok an uplifting place to visit. Last month, the company launched a largest national advertising campaign on television and digital media, highlighting more than 30 popular creators under the tagline “It starts on TikTok.”

“We’ve built this product for hundreds of millions of people, and we’re not looking for that to change,” said Ms. Pappas, a former YouTube executive.

But keeping TikTok’s community happy in such a turbulent period may be challenging. Some creators and fans have been rattled by Mr. Trump’s moves against the app. Since his executive order, people in the United States have installed TikTok about 6.5 million times, down 13 percent from a year earlier, according to Sensor Tower, an app analytics firm.

Competitors have also pounced. Facebook introduced Reels, a TikTok clone inside Instagram, in August. The social network has also doled out millions of dollars to some of TikTok’s biggest stars to lure them over to using Reels.

Ms. Pappas said she wasn’t worried about Facebook and Instagram Reels. “You can certainly copy a feature, but you can’t copy a community,” she said. “I think that’s really hard to replicate.”

“They need to be investing in those folks,” he said. “There’s so many things out of their control, but their future growth is based on influencers and content creators continuing to evolve and grow and leverage the new capabilities TikTok is rolling out.”

Ms. Pappas has worked in the online influencer world since some of its earliest days. Half Greek by birth, she grew up in Australia and speaks with an Aussie twang. She moved to London when she was 20, and eventually migrated to New York. In 2007, she joined Next New Networks, a company that helped web video creators earn money from their efforts.

YouTube bought Next New Networks in 2011. Ms. Pappas joined YouTube and quickly rose through the ranks. She was YouTube’s first audience development lead, a role that led her to connect with video makers. Her division at YouTube developed and popularized the term “creator” and helped transform video blogging, or vlogging, into a full-time job.

Ms. Pappas also wrote a book, “The YouTube Creator Playbook,” on how creators could make money from their followings, in 2011. She went on to develop YouTube’s Creator Academy, an educational content portal that teaches creators how to build a business on YouTube, and a channel certification program, which teaches creators about digital rights management, legal issues and advanced analytics.

TikTok lured her from YouTube at the end of 2018 to be its general manager and head of North America, based in Los Angeles. At the time, TikTok had just expanded globally. It was a new challenge for Ms. Pappas, who said she had wanted to get in on the ground floor of the next big creator movement.

“It was this burgeoning community that resonated as this next evolution of what the creator meant and redefined the creators over again,” she said.

Young people flocked to TikTok, which made it easy for them to create videos with a robust mobile-first suite of video editing tools. Lip-syncing videos and others soared in popularity.

Ms. Pappas said that unlike Facebook or Twitter, TikTok wasn’t wholly dependent on one’s social graph, or how many friends someone had. The app’s discovery algorithm instead surfaces popular trending content from people with followings both large and small, keeping users in the app longer and coming back more frequently.

“Anyone feels like they can be a creator,” said Greg Justice, TikTok’s head of content programming. “I’ve had friends with only a few followers who have gone viral.”

Mr. Justice, who works closely with Ms. Pappas, said that her leadership style was driven by data and that she often asked people to provide information to back up their projects and proposals. That helped the company avoid allowing dominant personalities and workplace politics dictate the way it was run, he said.

“She really democratizes the decision making and leads to more objectivity at the company,” Mr. Justice said.

The coronavirus has strengthened the ties among the TikTok community, Ms. Pappas said. Videos have trended under the #HappyAtHome hashtag, as creators riff off one another’s indoor experiments.

But Ms. Pappas has also had to deal with TikTok videos that are not all sunshine and rainbows. This month, a woman spoke out against TikTok for a viral meme in which thousands of users — including parents and their children — mocked people with physical disabilities across the platform.

TikTok noted that its community guidelines prohibit bullying and harassment, and encouraged its users to “exercise care and good judgment when it comes to the content they post, including parents and others who set an example through their behavior,” a spokeswoman said.

Nick Tangorra, 22, a TikTok creator with 1.2 million followers, said he had met Ms. Pappas only once but believed that she was the only tech leader who understood the creator community’s needs.

“It starts at the top,” he said. “TikTok knows fully that this app is what it is because of its creators. Vanessa is putting such an emphasis on creators, making sure we feel supported by the platform.”