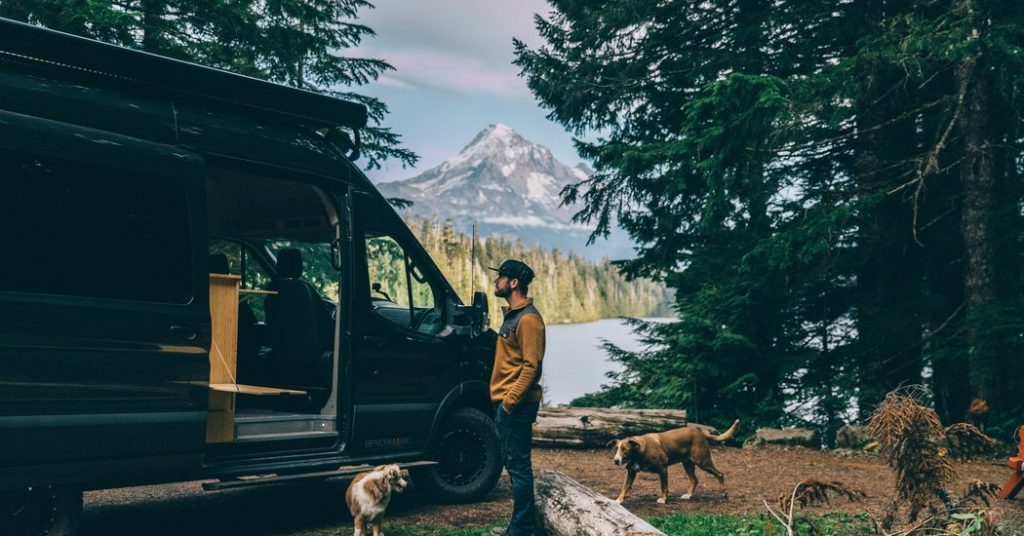 I do not own a car or a house or even a bicycle. Nor am I prone to following Instagram trends. Yet for weeks I have had an obsession: getting rid of all my possessions, breaking the apartment lease, and moving with my dog and my girlfriend into a tricked-out van.

The things I would do in a van! Coronavirus would be just a faint memory in a van on the open road.

As with most strange impulses that feel unique, this quirky-seeming urge is anything but. The #vanlife business is booming.

Dozens of new companies are popping up to rent or sell retrofitted sleeper vans, some now with yearlong wait-lists. Apps are surfacing to help these van dwellers find legal parking. Big R.V. park conglomerates, whose stocks have soared, are starting to eye the new interest and figure out ways to capitalize. And advocates for the rights of the homeless, who often end up living in cars out of need, are seeing potential new allies among the new professional class of car campers.

The last few months have felt chaotic, and the van living sell is that there can be stability in constant motion. “What we say is: We build your escape,” said Leland Gilmore, the founder of Benchmark Vehicles, which makes custom vans. “These are little escape vessels, escape pods.”

Mr. Gilmore typically sells custom vans for $100,000 to $300,000, not including the cost of the van, which is usually a $40,000-and-up Mercedes Sprinter. Demand has nearly doubled since lockdowns began, he said, and Benchmark Vehicles just hired three more people.

Vanlife has been an influencer trend on Instagram for years. It usually involved a good-looking young couple in a van posting gauzy portraits of each other and sweeping scenes of the places they visited. The fantasy life they sold is freedom and simplicity, a radical reduction in burden — but not comfort. For these are not backpackers looking tired and worn, with massive calves and wild hair. Vanlife is an aesthetic trend, closer to the tiny-home movement, yet even richer, lusher and typically sexier.

It is the minimalist fantasy, which is always in part a lie. The vans are 6,000 or more pounds of gear, and living very small and possession-free is often much more complicated than living big and sprawling.

But as the pandemic has worn on, it is a fantasy more people are finding themselves having.

Rohan Dixit, the founder of a medical device start-up called Lief, has decided to move full time — or close to it — into a van, as soon as his order from the van conversion company Ready Set Van comes this fall.

“Rent is really expensive, and I really like being out in nature, and now with coronavirus it’s like all in-person meetings are canceled,” said Mr. Dixit, 34, who lives in Berkeley, Calif. “I don’t really need to be in the Bay Area.” He said his plan was to “go between the mountains and the ocean and anywhere there’s a cell signal.”

Benjamin Fraser, who founded Ready Set Van in March, said he was “blown away by how deep the vanlife dream has permeated culture, and it made me realize we’re actually selling a lifestyle, a whole new way of living.”

He gets about 20 inquiries a day for vans. People have offered to throw in an extra $10,000 to cut in line, which he does not allow. He is soon moving the business into a 15,000-square-foot facility near Lambertville, N.J.

Before vans, he was into cryptocurrency trading, and the van boom times remind him of that heyday, he said. He worries it could disappear just as quickly. “Is it just going to evaporate the moment we have a vaccine?” Mr. Fraser said.

Of course, the dream of getting rid of stuff and hitting the open road has existed for many years. That is what drove the R.V. movement. So I asked Mr. Fraser what the difference between R.V. culture and vanlife was.

“It’s red versus blue,” he said. “It’s Republican versus Democrat.”

Vanlifers see themselves as free from restrictions and rules, he said. They do not want to be in R.V. parks. They want to be in the wilderness or on the streets of beach towns. Some of their parking behaviors — they will park for days in beach parking lots and residential streets — are illegal. This is becoming a problem as their numbers grow.

“Some people go far trying to be stealth now,” Mr. Fraser said. “They won’t have any windows. They’ll put like a Joe’s Plumbing sign on the side of the van. They beat up the sides of the van to make it look authentic.”

Jeremiah Weaver, who turns Mercedes Sprinter vans into sleepers in San Fernando, Calif., is booked until the winter. He said many new clients came from cities, especially San Francisco and New York. They are drawn to #vanlife in part because of coronavirus quarantines, in part because of high housing prices, and in part because they want to escape what looks to be a summer of protest and unrest.

“Right now with coronavirus and the political instability, people want more control over their environment,” Mr. Weaver said. “If you’re in a van, you know who’s in it, you control how clean it is, and you know where you’re going.”

Jay Sfingi, a co-founder of Sync Vans in Bellevue, Idaho, whose services are booked through early-2021, said, “There’s this sense of wanting to control your own environment more.”

Plus no one would need to know. Many of us are working from home anyway. More companies are telling us we can work from wherever we want. So the question is why not live in a van for a while?

“Your boss isn’t really paying attention to the background on your Zoom screen,” said Scott Kubly, the chief executive of the van rental start-up Cabana, whose orders have jumped 400 percent since lockdowns started.

Some van retrofitters are worried all the new interest from inexperienced van campers like me will bring punishment on them all.

“We’ve now seen basically everyone in this country want to get out in a van, but no one actually understands how to camp off the grid,” said Gretchen Bayless, who rents sleeper vans through her company Roamerica. “They think they can park anywhere and that there’s like facilities out there on the road. And we have to say, ‘No, doing this means you have to get a toilet from us and you go in a bag, and you carry that bag.’”

And park services are either limited or closed because of coronavirus shutdowns.

“People are just being dumb,” Ms. Bayless said, laughing. “So now we’ve been kind of vetting people who call in.”

Others watching the movement see potential for new political alliances. As more young professional urban dwellers decide to spend time in vans, longtime activists for the homeless see an opportunity.

Tommy Newman, a director at United Way of Greater Los Angeles, which supports the homeless, compared it to what’s happening with high-end restaurants. New accommodations for restaurants to serve on the sidewalks might end up also making life easier for street vendors.

“People in government are bending over backward to accommodate all these restaurants using sidewalks in a way they never, ever did with street vendors who have been making tacos and hot dogs and street-based food for years, begging for these changes,” he said.

These new vanlifers might push for changes that help those who live in vans out of need, not as a hobby, he said.

As with street dining, these new van dwellers raise questions of both impact and opportunity.

So I keep shopping for one of these vans. As I do, I go deeper, reading about the various specs and possible additions. How great would it be to have a rainfall shower head? A bed for four? A desk? Maybe even a television?

R.V. owners will realize how ridiculous that sounds. The Winnebago Intent is both less expensive (or at least comparable at $122,000) and sleeps at least five. No wait-list. But R.V. business owners know that eventually the hipsters in vans will find their way to the vehicles that were already prepared for them.

While vanlifer apps like Hipcamp and Harvest Host help van dwellers find farms and wineries to park in, Rich Stockwell, an R.V. park consultant, said a lot of investors were betting on vanlifers wanting parks pretty soon. People are talking to him about developing more youth-oriented parks for vanlifers with areas for children and pets, as well as elaborate business centers.

“The analogy I like to use for people with vans is they’re just like boaters,” he said. “They get foot-itis, and they just can’t wait to get one more foot, another foot, and pretty soon they’re in a big rig.”