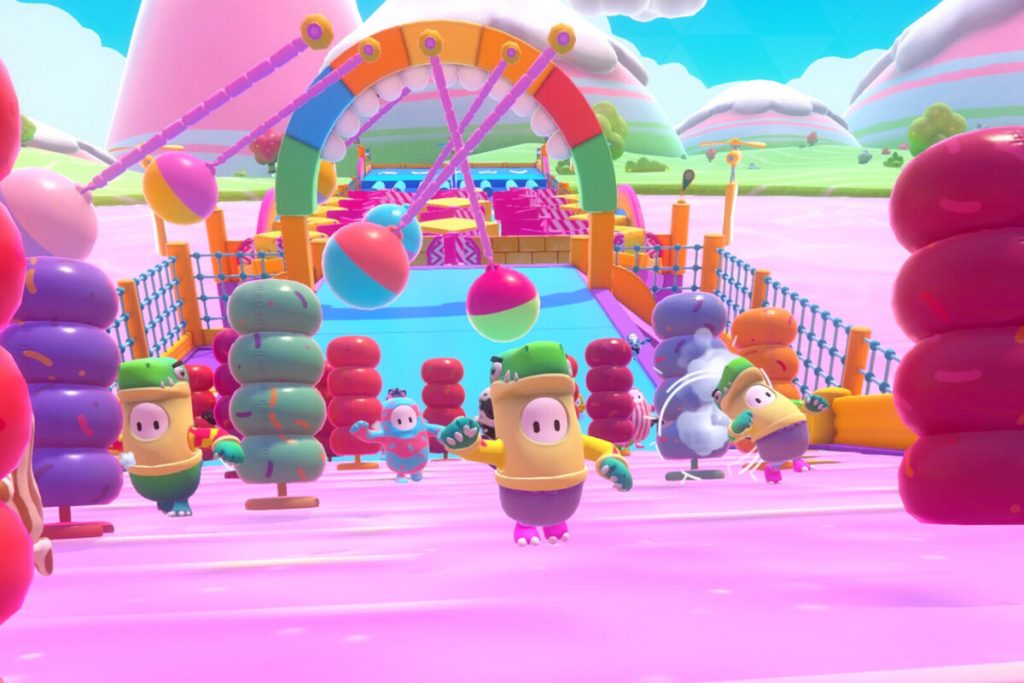 I dig PUBG. My kids are into Roblox and Minecraft. We’re all wildly in love with Fall Guys: Ultimate Knockout after playing a closed technical beta this past weekend. Turns out that a cute, colorful battle royale party game is exactly the game I need in these dark summer months of 2020. This could very well be gaming’s next big hit when it launches on Steam and PlayStation Tuesday. It’s just $20, but the game will also be free for PlayStation Plus subscribers—a recipe for success that helped Rocket League blow up back in the day.

But more importantly, it’s an absolute blast to play.

Fall Guys channels the feel of the old Wipeout game show, if up to 60 contestants plowed through Wipeout’s zany courses simultaneously. It even refers to each multiplayer run as a “show,” split up into several short, randomized stages that last roughly one to four minutes a pop. Each stage counts as a round, with the goal of outperforming the other players to qualify for the next one. Between each stage, the cuddly avatars of the losers plummet from a Hollywood Squares-esque game board, until a small handful of players reach the final level, where they race through an obstacle course to touch a (literal) crown first and become the champion.

It sounds simple, and it is—your only action buttons are jump, dive, and grab—but the massive crowds, relentless pace, ludicrous sound effects, and delightfully fun stages kept us coming back for one more round over and over again, huge grins on our faces. Fall Guys begs to be played over and over again.

The various challenges careen between competitive and cooperative modes. One minute, you might be racing against 59 other Fall Guys through long obstacle courses full of spinning surfaces, devastating whirligig windmills, and rotating mallets. The next, you might be split into soccer teams trying to score the most goals in the allotted time, or playing a fruit memory game where wrong answers plunge you to your death, or trying to balance on a rotating log alongside everyone else while hazards zoom toward you, or…well, the list goes on and on, with 25 stages available at launch.

The rapid-fire shift in focus keeps Fall Guys feeling fresh even once you’ve played most of the available levels. When the stages pop up can make a huge difference, too. A massive horde of 60 hooting, grabbing, leaping Fall Guys throwing themselves at walls in Door Dash as a massive wave plays much differently then trying to find the real doors as part of a smaller, higher-stakes group later on. Being split into big teams to sort eggs or play soccer is pure chaos when that level lands early, but if you come upon the stage closer towards the end of a show, the teams might not be evenly split.

That might frustrate ultra-competitive gamers, but Fall Guys: Ultimate Knockout isn’t really intended for tryhards, and losing isn’t punishing like it is in other battle royales. Coming in second in PUBG hurts you in your soul; in Fall Guys, you smile, shake it off, and leap right back into a new show. You can opt to continue watching other players compete in later stages if you fail to qualify in a match, but it’s quick and easy to back out and hop into another game. In the technical beta, I wasn’t left waiting for players for longer than a minute. You have to think it’ll be even faster when people other than streamers and press can play the game. It’s perfectly tuned for an easy-breezy night of binge gaming.

There’s no split-screen support, which was a bit of a bummer while playing with my kids, but you can queue up with up to four buddies to play together. Mediatonic, the developer, says it’s explored supporting split-screen, cross-play, and private rooms during development and hopes to add those features in future updates.

While the game supports keyboard and mouse, complete with the ability to rebind keys, it’s like Dark Souls in that you’ll definitely want to play with a gamepad. The Fall Guys themselves feel delightfully physical and clunky. It’s borderline impossible to stay upright in the middle of a horde—hence Fall Guys—and getting banged and bopped around while your character hoots in protest provides endless entertainment.

In a game where you’re battling gargantuan hordes of other players, part of the appeal is making your chubby Fall Guy, well, your chubby Fall Guy, and the game includes customization options to do just that. You’re able to tinker with your Fall Guy’s color, patterns, and accessories, earning more unlockables as you play. I couldn’t care less about this part of the game, but my kids were all over it.

You can also earn two different currencies while you play: Crowns and Kudos. Crowns can only be earned when you win, while Kudos can be purchased or earned in-game to progress your level. “Both of these currencies can be used to buy new costumes for your Fall Guy,” a public relations rep told me. “Many of the best costumes in the game (including some very special collaborations we have yet to announce) will only be available via Crowns.” The developers also plan to release small costume packs as DLC over time for folks with the insatiable thirst to collect every skin.

I can hear some of you already groaning as I type this. “Microtransactions again?!” But it’s important to note that this is not a pay -o-win scenario. “All purchases are linked to cosmetics, are completely optional, and will not affect the core experience,” Mediatonic’s PR says. New levels and features will continue to roll out over time at zero cost to existing players. Adding in-game purchases like this helps keep the cost of the base game low while supporting that additional development over time.

In the technical demo, the customization aspect was minimally invasive. You never need to visit the character screen before leaping into shows. That said, the store section of the game was locked during these closed betas, so I can’t speak much to how it’ll be implemented.

I’m not personally worried about the cosmetics interfering with play, and like I said, my kids were into it. And we were all deeply, deeply into the wild, wacky gameplay itself. The hours just melted away during the tech demo, and that was with (I think) a limited number of stages available.

I can’t slap a review score on this since I haven’t played the full game, but I can tell you I plan to pick up Fall Guys: Ultimate Knockout the second it launches. I’m telling all my friends about it too, as the graphics can run on even modest gaming systems, and at just $20, the price is certainly right. It probably won’t be the deepest game around, but I suspect it’ll sneakily rack up a lot of hours played in my house.

You know, like Rocket League. Fall Guys could—should—blow up.