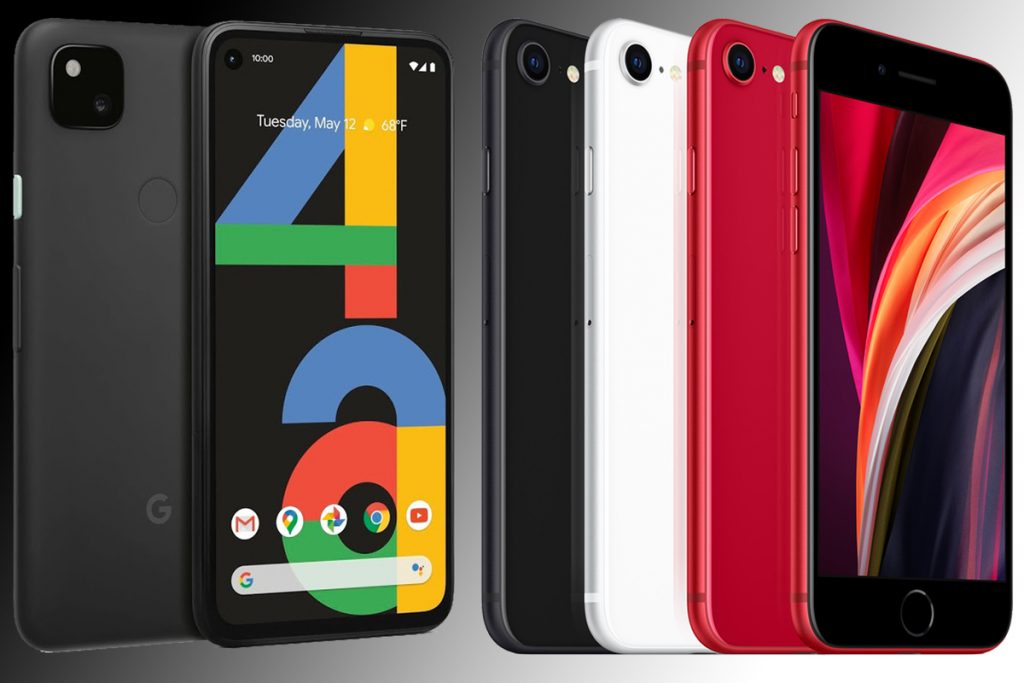 Google Pixel 4a vs iPhone SE

The iPhone SE might be Apple’s unexpected hit of 2020, but there’s a new competitor in town: the Google Pixel 4a. But Google’s newest mid-range handset is going to need a lot more than a low price to take on Apple’s mighty budget blockbuster. Here’s how the two phones measure up.

I never thought I’d see the day when Google designs a nicer phone than Apple, but it is hard to deny the Pixel 4a’s good looks. It has relatively slim and uniform bezels all around thanks to its hole-punch camera, an extremely compact and light frame, and a classy all-black exterior. Even with a far-bigger display, the Pixel 4a has very similar dimensions and weight as the SE:

When it comes to the back of the phone, the SE has the advantage. Not only does the Pixel 4a have an ugly and largely unnecessary camera array, it’s also made of plastic and comes in just one color, black. The SE, on the other hand, comes in three colors and is made of glass, so it feels more luxurious and is less prone to scratches. Even the camera bump is nicer on the SE, with a single circle surrounded by an aluminum ring.

But the front is all that really matters when buying a phone, and the 4a excels. The iPhone SE isn’t an ugly phone by any stretch, but it certainly shows its age compared to the 4a. From the gigantic bezels to the small display, the iPhone SE simply isn’t as modern as the Pixel 4a, and Google has put some pressure on Apple to update its design with the SE 2.

Along with the iPhone SE’s outdated design comes an outdated display. Nearly every other phone has better screen specs, and the Pixel 4a is no exception:

The Pixel 4a also supports HDR, 10,000:1 super contrast ratio, and of course, the true blacks of OLED displays. The iPhone SE’s screen is probably the best LCD ever made for a smartphone, but it can’t hold a candle—or even a high-res photo of a candle—to the Pixel 4a.

Google Pixel 4a vs iPhone SE: Specs and performance

Here’ where things start to even out. The Google Pixel 4a is a mid-range phone with mid-range specs while the iPhone SE is more of a high-end phone trapped in a budget body:

You get twice as much storage with the Pixel 4a, but don’t be fooled by the iPhone’s seemingly smallish amount of RAM. Apple doesn’t play the spec sheet game with its phones, but the iPhone SE is one of the speediest phones around, with a processor that runs circles around the latest Snapdragons, let along the 730G here.

Neither phone has 5G on board, but Google has announced that a 5G version will be arriving later this year for a $150 premium over the LTE 4a. As far as we know, there won’t be a 5G iPhone SE until at least next year, so that could give the 4a a speed advantage even with a higher price tag. But for now, the iPhone SE is a better performer.

Google Pixel 4a vs iPhone SE: Battery and charging

Neither of these phones are going to win any awards for their batteries, but on paper Google takes the crown:

But like the specs above, numbers don’t tell the whole story. Google says the Pixel 4a will last up to 24 hours “based on a mix of talk, data, standby, and use of other features” (down from the 30 hours in the Pixel 3a), while Apple claims you can get up to 14 hours of talk, 12 hours of internet, and 12 days of standby. So the two phones will likely both last you through a full day before they need to be charged.

Both handsets support 18W fast charging, but only the Pixel 4a includes the appropriate adapter. You’ll need to BYO with the iPhone SE. However, you’ll get wireless charging with the iPhone SE (also with a supplied adapter).

The Pixel 4a and the iPhone SE both have single cameras, and the specs are quite similar:

But the hardware similarities are very skin deep. While both phones support portrait mode with depth control, HDR, and excellent zoom up to 5X even without a proper telephoto lens, the Pixel 4a is the superior performer, with a slew of premium features that you won’t find on the SE, at least not without third-party apps.

Chief among them is Night Mode, which is stellar on the iPhone 11 but completely absent from the SE. There’s also astrophotography, which lets you take pictures pf stars with the aid of a tripod, as well as dual exposure controls for adjusting highlights and shadows. The iPhone SE has a great camera, but the Pixel 4a is just a little better, at least on paper.

Google Pixel 4a vs iPhone SE: OS and updates

We won’t get into the iOS versus Android debate here, but both phones come with the newest version of their respective OS (Android 10 and iOS 13), but the difference between the two systems is more than apps and features. Google promises just three years of Android updates with Pixels, while Apple doesn’t put a limit on how many updates you’ll receive. But it’s almost guaranteed to be longer than three years.

Take, for example, the iPhone 6s, which launched in 2015 with iOS 9. It will receive iOS 14 in the fall, representing five years of updates and four full version upgrades. With that in mind, it could mean the iPhone SE will likely be able to install iOS 18 when it lands in 2024.

The Pixel 4a, on the other hand, will get Android 11 in a few months, then Android 12 and 13, but that’s probably it. Even if Google throws users a bone and lets them update to Android 14, which will likely launch just weeks after its cut-off date, the phone probably won’t receive any updates once the calendar changes to 2024.

Apple is selling the iPhone SE at an aggressive $399 price tag, but Google is going even cheaper with the Pixel 4a: $349. That might be just 15 percent less, but it is a pretty significant psychological discount, especially when you factor in the traditional Pixel discounts Google and other retailers often run.

The iPhone SE has been the phone to beat since its launch in March, and there hasn’t been much in the way of any serious competition. But Google might have done it with the Pixel 4a. From the design to the camera and lower price tag, the Pixel 4a is truly Android’s answer to the iPhone SE, and Apple just might have met its first serious threat. We’ll have comparisons and a full review soon on PCWorld.