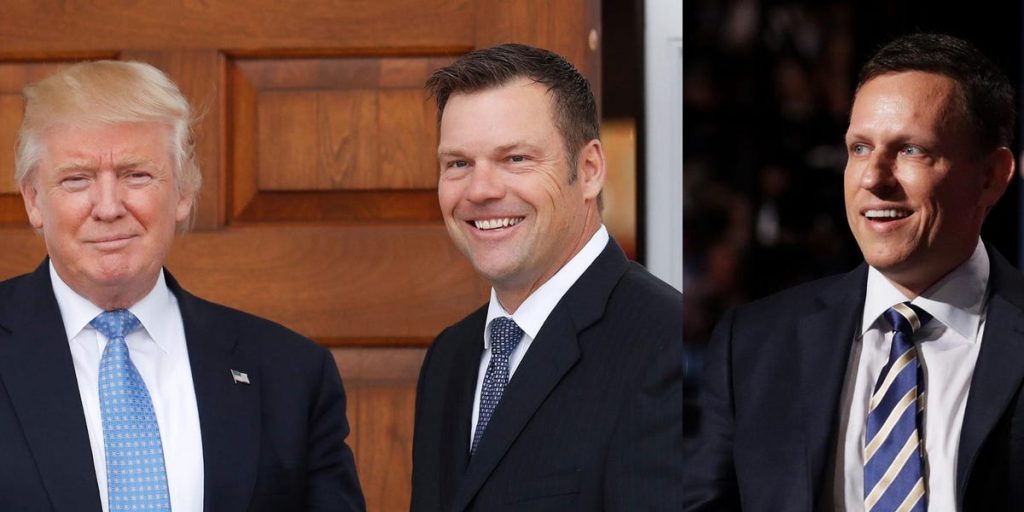 Tech billionaire Peter Thiel has been spending big in a US Senate race in Kansas, pumping $850,000 into a super PAC called Free Forever that backs Kris Kobach for the seat, Recode reported Tuesday.

During a fundraiser at his New York City penthouse last fall, Thiel told attendees that he would put his money behind Kobach — a hard-line Republican who was once in the running to be President Donald Trump’s immigration czar — in an effort to take on the GOP establishment candidate, according to Recode.

Kobach is running against Rep. Roger Marshall, the preferred establishment candidate, in a race that could turn the historically red state into a key 2020 battleground as Republicans increasingly worry about keeping control of the Senate.

But Thiel’s motivations appear to be geared more toward gaining new potential allies in Washington, according to Recode.

While he has been one of Trump’s few high-profile supporters in the tech industry, Thiel backed away from the president’s reelection campaign earlier this month, saying he thought Trump had a slim chance at winning in November.

Since then, he has financially backed Sen. Tom Cotton and gotten closer with Sen. Josh Hawley (who shares Thiel’s criticisms of Google’s business in China as unpatriotic), Recode reported.

Kobach and Thiel are similarly in favor of stricter immigration policies, and Thiel is a co-founder of Palantir, a data analytics firm that works closely with US immigration enforcement agencies.

The two have crossed political and financial paths before as well. Gawker reported in 2008 that Thiel had donated to anti-immigration group NumbersUSA, which has since become a vocal backer of Kobach. Thiel also served on Trump’s transition committee that had considered Kobach for immigration czar. More recently, The Kansas City Star reported that Thiel had funneled at least $100,000 to a “dark money” group backing Kobach.

Thiel’s tech industry résumé includes co-founding PayPal, sitting on Facebook’s board, and starting VC firm Founders Fund, but he has also attracted controversy along the way with his politics.

In a 2009 essay, Thiel argued that American democracy has declined since women got the right to vote, and in the early days of Trump’s presidency, Thiel supported his widely decried travel ban on refugees from Muslim-majority countries.