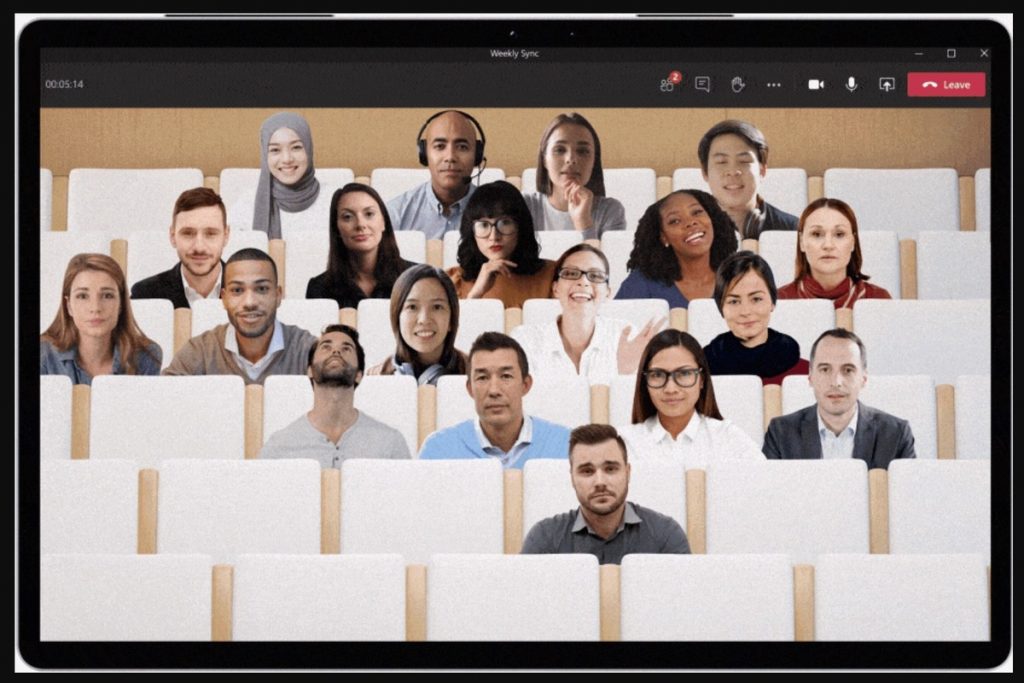 Microsoft today said that it’s shaking up online Teams video meetings with a new “Together mode” that places participants in a virtual auditorium. It’s all part of a redesigned Teams experience that capitalizes on some of the promises Microsoft has been making for years. There’s even a pair of Teams smart displays.

On Wednesday, Microsoft said the company has spent much of the last few months rethinking the way in which video meetings were conducted. About 60 percent of those Microsoft surveyed said they felt less connected to their colleagues due to the coronavirus, so Microsoft’s new Teams update tries to make nonverbal communication a priority.

Several features play into this aspect of the Teams revamp, including chat bubbles, an updated way to “raise you hand” during meetings, and even live reactions. An earlier version of the “raise hand” option simply popped up a small hand icon. Now Teams will outline that particular speaker window in yellow, as an unobtrusive signal that the participant wishes to contribute.

Text is a priority in Teams’ video calls

However, you don’t have to participate in the conversation orally. The chat window in Teams (and competing services) has become a sort of side channel to carry on the conversation without interrupting the presenter. Here, Teams is introducing something new: chat bubbles, with small snippets of text that will appear over your head if you want to chime in with a supportive comment or question. If that’s too distracting, Microsoft has stolen a page from other chat apps, and added “live reactions,” Microsoft’s name for emoji (like a heart) that participants can trigger and that can bubble up from their window.

Microsoft has also said for a while now that transcription and translation are a key part of the collaborative office experience, from showing off automatic translation in Skype to its vision of the office of the future, where a conversation is translated in real time. Speaker attribution, where Teams automatically highlights the speaker, will arrive “soon,” Microsoft said.

Microsoft promised that live transcripts will arrive later this year, together with a searchable transcript file that will be attached to the meeting. Real-time transcriptions will follow soon after that, Microsoft said. (The company made clear, however, that it will not be able to pick out individual speakers from a group that’s joining a Teams chat from, say, a conference room.)

Making Teams video look better with Together mode and more

Microsoft was late to the game with AI backgrounds, and it’s now trying to recapture the conversation. Teams will begin adding video filters to adjust lighting levels algorithmically and create other effects, enhancing the way you look on camera. Teams is adding a dynamic view, which will adjust the size of the video windows that show participants, but also allow you to “pin” key speakers, so their windows will never be accidentally minimalized.

Teams meetings will grow to 1,000 participants, though you’ll never see all of those windows onscreen at one time—49 simultaneous video windows are supported, and that hasn’t changed. (Up to 20,000 people can passively watch a Teams presentation, Microsoft said.)

In a way, Together mode combines all of that. Instead of placing participants in their own video windows, Microsoft uses AI to “snip” participants out of their backgrounds and place them in a virtual auditorium. The result may appear a bit surreal—these are literal talking heads, after all—but it’s a way to fit more virtual participants onscreen at one time. Microsoft said it has also used gaze tracking to try and orient the resulting images so they appear to be looking straight at you, even if their camera setup is slightly offset. Together mode will roll out in August, Microsoft said, and new backdrops will be added over time.

Within the coming weeks, Microsoft said, Teams users on Android and iOS (and who subscribe to Microsoft 365) will be able to ask Cortana to make a call, send files and author chat messages, and more.

Microsoft is adding the “suggested replies” that have become common in Google’s Gmail and Microsoft Outlook, where you’ll be able to tap a quick bubble with a “Will do!” or “Can we talk about this?” in response to the content of a previous message. Teams will add an internal “Tasks” app, which pulls together similar features from Outlook and Microsoft To-Do, providing a unified dashboard within Teams of things you need to get done. This sort of cross-pollination of functions began with Outlook (including Mail and Calendar tabs within the mobile app), and the same thinking is moving to Teams.

New Teams hardware on the horizon

Finally, Microsoft said that the Microsoft Teams hardware that was announced earlier this year will be deployed later this year. Microsoft’s statement was a little odd, given that the Lenovo ThinkSmart View, a $350 device that Lenovo announced at CES in January, is already available and shipping.

The ThinkSmart View is a “companion” device that works alongside a laptop, connecting (exclusively) to Teams and providing a 5MP front-facing camera and a 1200×800 8-inch IPS screen for conducting video calls. Presumably, a second companion device from Yealink that will debut later this year will have similar features.

Finally, Microsoft said that Teams capabilities will be added to the Surface Hub, complete with a new room remote feature that will go live later this year within the Teams mobile app. Users will be able to use the app to launch features via voice command.