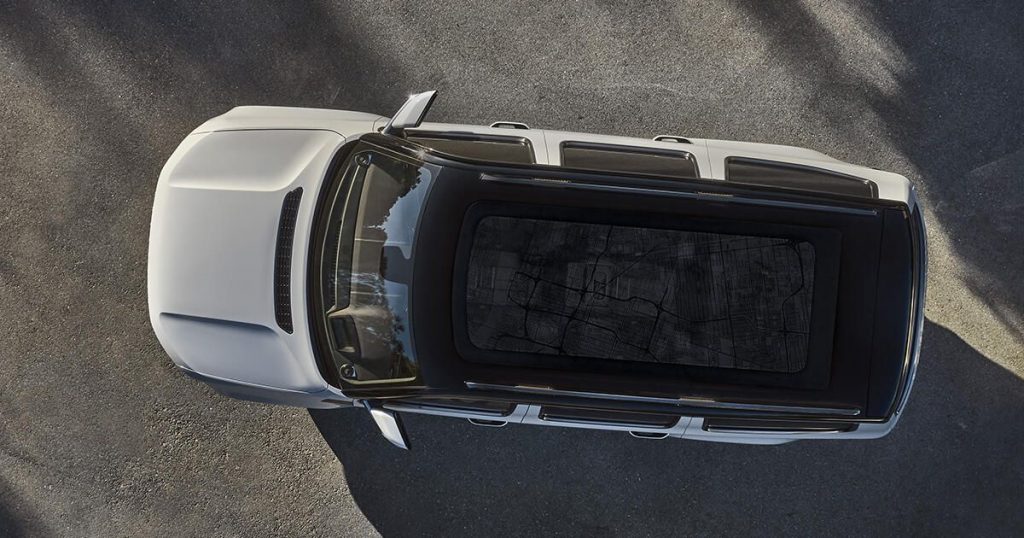 Another day, another Jeep Grand Wagoneer teaser. This time, it’s all about the Motor City. The brand tweeted Friday two new photos of the big SUV, which shows off a massive glass roof complete with a big ol’ map of Detroit, Michigan. Jeep’s often known for its little nods to the past or its heritage, but the giant map takes this practice to another level.

On one hand, it’s really neat to see this element incorporated. On another, some of us here think it might be a little too over the top, though it certainly accentuates the “floating roof” style that’s so popular among automakers these days. Whether the map included on the glass roof makes its way to production remains to be seen. It seems like a tedious styling feature to include for a mass-produced vehicle. Then again, we don’t build cars. Fiat Chrysler does.

The bird’s eye view of the Grand Wagoneer also starts to give us a good look at the SUV’s size, and it looks positively massive. The four big doors aren’t a surprise, but it looks like there’s an enormous amount of space behind the first two rows of seats.

In the second photo part of today’s teaser, we’re given another look at the Grand Wagoneer’s cabin, and it’s shaping up to look pretty lovely based on the detail shots Jeep’s fed us so far. The photo only shows what looks like the rear air vent, but the details, man. Some sort of storage is included below the vent, and to the side, an etched silhouette of the original Grand Wagoneer sits in place with its initial production date of 1963.

The teaser train will deboard soon, though. The Grand Wagoneer will debut Sept. 3 and we’ll have full coverage right here.