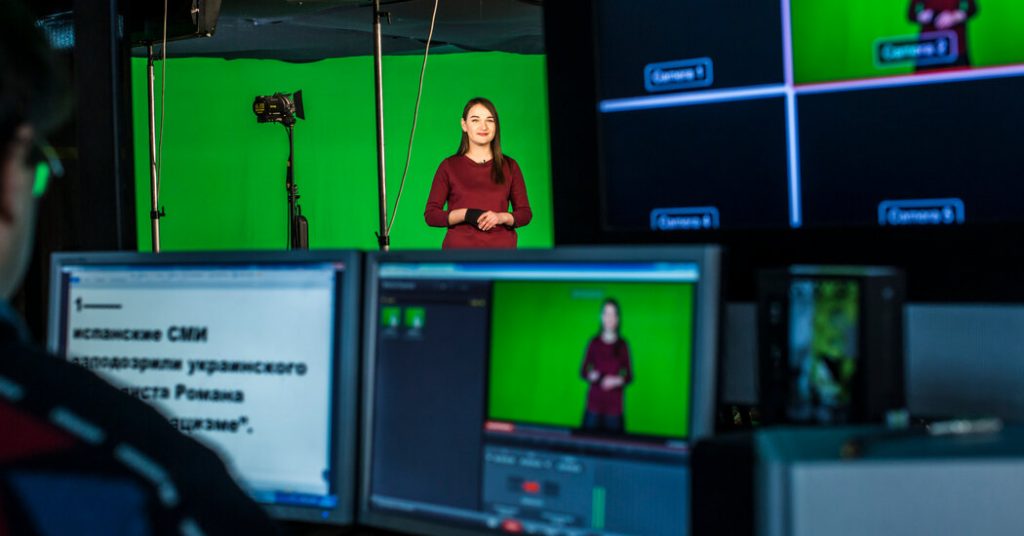 Earlier this year, Facebook hired StopFake to help curb the flow of Russian propaganda and other false news across its platform in Ukraine.

StopFake, like all of Facebook’s outside fact checkers, signed a pledge to be nonpartisan and not to focus its checks “on any one side.” But in recent weeks, StopFake has been battling accusations of ties to the Ukrainian far right and of bias in its fact-checking. The episode has raised thorny questions for Facebook over whom it allows to separate truth from lies — and who is considered a neutral fact checker in a country at war.

“They are empowering these organizations and these people to be making calls about what kind of information, what kind of opinions, what kind of communications are illegitimate or legitimate,” Matthew Schaaf, who leads the Ukraine office of the American human rights group Freedom House, said of Facebook and its fact checkers. “The question that needs to be asked is: Do these people deserve our trust?”

A Ukrainian news outlet, Zaborona, published an article this month citing photographs of a prominent StopFake member meeting with nationalist figures, including a white-power rock musician whose lyrics deny the Holocaust. StopFake denied having any far-right ties or bias, calling the Zaborona article part of a campaign of slanderous “information attacks.”

Zaborona’s editor, Katerina Sergatskova, said she fled Ukraine on Wednesday after receiving death threats. (StopFake has condemned the threats.) On Facebook, some of her critics had claimed, without evidence, that she was a Kremlin agent.

The episode underlines the high stakes facing American social media companies as they try to respond to disinformation in the world’s geopolitical hot spots. After being criticized for failing to stop the spread of disinformation during the 2016 presidential campaign in the United States, Facebook sought to avoid becoming an arbiter of truth by creating a third-party fact-checking program.

The program now includes more than 50 organizations that check facts in more than 40 languages, including global news agencies such as Agence France-Presse and Reuters alongside smaller groups like StopFake.

Yevhen Fedchenko, StopFake’s editor in chief, declined to comment for this article. He has told other media outlets that he plans to file a lawsuit to defend StopFake’s reputation, and he wrote in an email that “our legal team advised us against talking to media until the hearing in the court.”

Facebook said in a written statement that all its fact checkers followed a “Code of Principles to promote fairness and nonpartisanship in fact-checking.” Baybars Örsek, the director of the group that administers that code of principles, said it was conducting an “interim assessment” of StopFake in light of the Zaborona report.

He said his organization, the International Fact-Checking Network, which was set up by the Poynter Institute for Media Studies in St. Petersburg, Fla., takes reports of far-right ties seriously. He acknowledged that nonpartisanship had long been a particularly difficult thing to ascertain during an armed conflict like Ukraine’s.

“They are working in a country where they are still practically in war with Russia,” Mr. Örsek said of StopFake. “This is a question we also struggle with as fact checkers: How do you do nonpartisan fact-checking when you have tanks on the street?”

Many European countries struggle with far-right groups, but critics say they are tolerated to an excessive degree in Ukraine because they share a common enemy with the country’s intellectual mainstream: Russia. The notion that Ukraine has a far-right problem, in turn, is amplified and distorted by Russian state propaganda, which often falsely refers to Ukraine’s pro-Western revolution in 2014 as a fascist coup.

Deadly fighting between Ukrainian forces and Russian-backed separatists continues to simmer in the country’s east. And propaganda has for years been a key tool for the Kremlin in its effort to keep Ukraine in Russia’s orbit.

The debate over treatment of the far right came to a head after Zaborona published its article describing what it said was evidence of StopFake’s bias. The evidence included social media photographs showing Marko Suprun, who hosts StopFake’s English-language video program about Russian disinformation, meeting with two Ukrainian nationalist musicians at a gathering in 2017.

The songs of one of the musicians, Arseniy Bilodub, include “Heroes of the White Race” and, referring to the Holocaust, “Six Million Words of Lies.” Anton Shekhovtsov, an external lecturer at the University of Vienna who studies far-right movements in Europe, said in an interview that he did not see StopFake itself as a far-right organization, “but I don’t think that they are nonpartisan.”

StopFake countered that Zaborona was employing “the fallacy of guilt by association” in presenting the photographs as evidence of far-right connections on the part of Mr. Suprun. Mr. Suprun did not respond to requests for comment.

“He has also been photographed alongside Rabbi Yakov Bleich, but this does not make him a member of his synagogue,” StopFake said in a lengthy response to the Zaborona article posted online. Mr. Suprun, the statement added, “is not involved in the joint fact-checking project StopFake has with Facebook.”

Ms. Sergatskova, Zaborona’s editor, is originally from Russia and received Ukrainian citizenship in 2015. A prominent Ukrainian journalist on Facebook called her a “lefty F.S.B. mold” — referring to the Russian spy agency — and other commenters posted her Kyiv home address before she went into hiding.

Human Rights Watch and the Committee to Protect Journalists urged the Ukrainian authorities to investigate the threats against Ms. Sergatskova. Ukrainian media organizations, including StopFake, signed an open letter condemning the threats. The Ukrainian police did not respond to a request for comment.

Ms. Sergatskova said in a telephone interview after she went into hiding that her record as an independent journalist has been distorted by critics who saw her as playing into the Kremlin’s hands.

“Truth is a lie, freedom is slavery — it’s an Orwell kind of story,” Ms. Sergatskova said. “By all appearances we really, really touched a nerve.”

Ukrainian journalism students and faculty members launched StopFake in 2014 to counter Russian disinformation, drawing praise from Kyiv civil society and Western supporters of Ukraine. StopFake’s agreement this year to sign on as one of Facebook’s two fact-checking partners in Ukraine gave it newfound clout.

Facebook says it reduces a post’s distribution in users’ news feeds if a third-party fact checker marks a post as false, but it does not take it down. Maksym Skubenko, who heads Facebook’s other Ukrainian fact-checking partner, VoxCheck, said users typically saw posts and articles marked as false within seconds of when his team enters a fact check into Facebook’s system.

StopFake’s website shows that the organization has carried out some 200 fact checks of posts and articles for Facebook in Russian and Ukrainian since the group started working for the social network in April. Many of the fact checks are apolitical and related to the coronavirus pandemic. A smaller number address issues of Ukrainian national identity, generally when the item being fact-checked fits into a pro-Russian narrative.

In one case, StopFake contested Facebook users’ claims that most Ukrainians celebrated the May 9 Soviet-era Victory Day holiday marking the defeat of Nazi Germany. In another, StopFake fact-checked an interview with a pro-Russian commentator that carried the headline “Ukraine Is Russian People.” When Facebook users try to share the article featuring the interview, they see a pop-up box titled “False Information in This Post.”

If users then click “Post Anyway,” the article appears grayed-out on their profile with the words “False Information: Checked by independent fact checkers,” with a link to StopFake. The original article quotes the commentator as saying that there are “many Russian people” in Ukraine. StopFake’s fact check cites a poll in which 90 percent of Ukrainians describe their ethnicity as Ukrainian.

That leads to an unanswered question for Facebook. As Ms. Jankowicz put it: “Should opinions be fact-checked?”

Mr. Skubenko, who heads Facebook’s other Ukrainian fact-checking partner, said he stayed away from issues of national identity.

“In some cases, it’s impossible to check this in a fact-based way,” he said. “Then you have to write that it’s your personal opinion and not a fact check.”

StopFake’s journalists, like many Ukrainians, “are trying to find this compromise between liberal values and patriotic values,” said Volodymyr Yermolenko, a philosopher who edits Ukraine World magazine. In so doing, he went on, StopFake seeks to break down a long history of Russian propaganda in Ukraine.

“It’s a deconstruction of myths, on top of fact-checking,” he said.