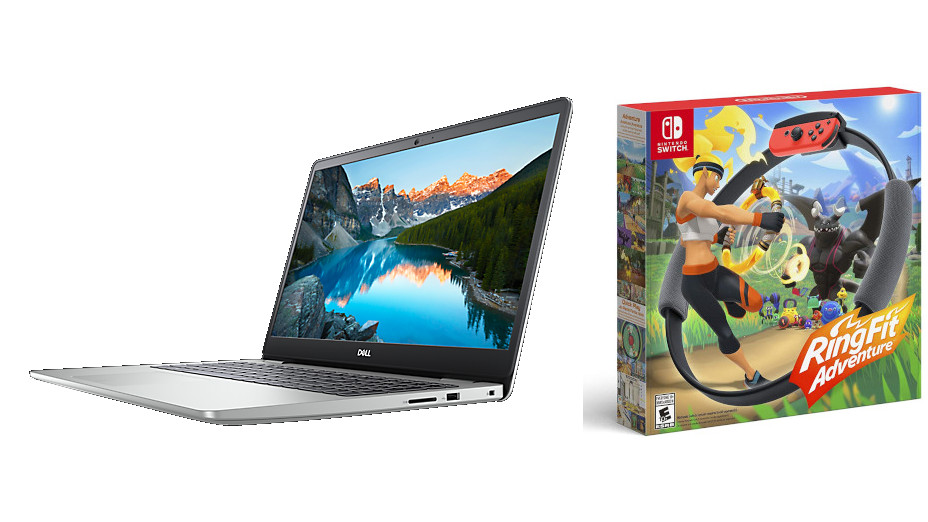 Today you can save on a highly capable laptop from Dell with a $65 discount. Already got a PC? You can also now order Nintendo’s Ring Fit Adventure, which has been sold out for weeks and just now came back in stock with a $10 discount.

Dell designed this modern laptop with one of Intel’s new Core i5-1035G1 processors and a fast 256GB M.2 NVMe SSD. This processor offers decent performance for daily tasks such as schoolwork and office work. It also has a capable integrated graphics processor, which can run some games with low settings reasonably well. The notebook features an LED-backlit keyboard, which makes the system look cool as well as being useful while typing in the dark. Currently, you can get this system from Dell marked down from $649.99 to $584.99 with promo code SAVE10. The Ring Fit Adventure is Nintendo’s newest entry in its long-running series of games that promote physical activity and exercise. In addition to the game itself, this kit also comes with a leg strap and a Ring-Con that is essential to playing and enjoying the game. After being sold out for weeks, you can now order the Ring Fit Adventure from Amazon marked down from $79.99 to $69.88.

This eight-piece Ring Alarm kit comes with two motion sensors and three contact sensors to detect people walking around and opening doors in your home. The system also comes with a speaker that works as an alarm, a keypad for arming and deactivating the system, and a range extender to keep the various components connected. The bundle even comes with an Amazon Echo Show 5 that can be used to control the security system with voice commands. You can get it from Amazon right now marked down from $389.98 to $249.99.

Dell’s newest XPS 15 laptop features a 1920×1200 resolution display with a 16:10 aspect ratio. The system also has stylish, carbon-fiber palm rests, and it comes equipped with a capable Core i7 hexa-core processor that can hit clock speeds as high as 5GHz. The system’s also fit to run games with an Nvidia GeForce GTX 1650 Ti. The new XPS 15 retails for $1,799.99, but with promo code SAVE10 you can currently get it from Dell marked down to just $1,439.99. Eufy designed this slim robovac with a vacuum capable of 1,500Pa of suction. This gives it the power it needs to help keep your home clean, and it can also last for up to 100 minutes on a single charge. Right now you can get one from Newegg marked down from $239.99 to just $159.99 with promo code AKEUFYAUG.

In addition to its large 256GB capacity, this microSDXC card is also fairly fast and able to transfer data at up to 100MB/s. Currently, you can get it from Amazon marked down from $49.99 to $34.99.