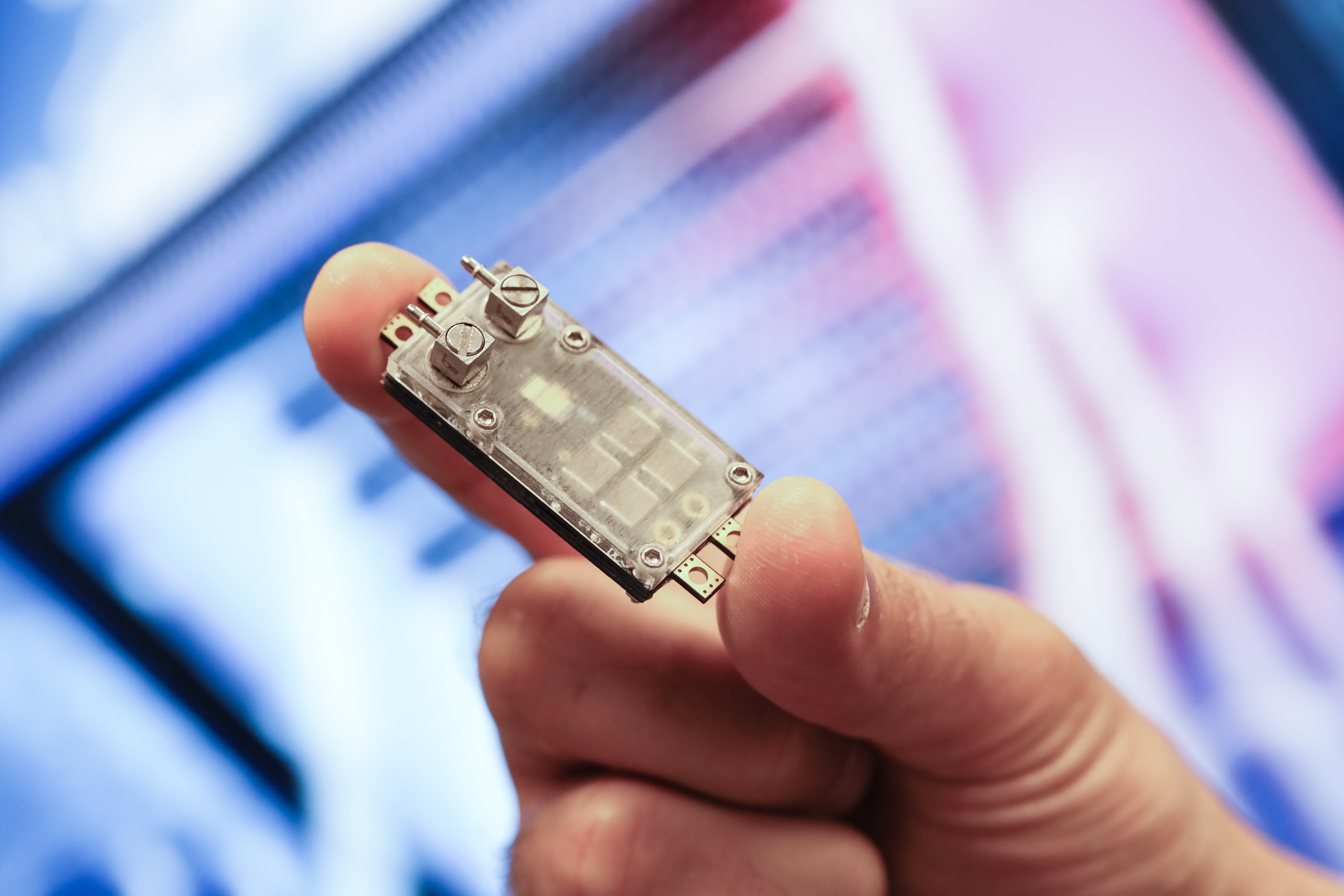 As electronics get steadily smaller and denser, they also get hotter. Their components do not function best at high temperatures, so dealing with the escalating heat that colliding electrons produce as they flow through the semiconductors in these shrinking items is a huge—and increasingly pressing—technological challenge.

There are various ways to chill components, ranging from simple fan-cooled heat exchangers to more compact and sophisticated systems. One of the latter involves equipping semiconductor chips with a tiny device that has fluid-carrying microchannels running through it to move heat away. These channels must be as small as possible so that more of them can fit on a single chip. But the smaller the channels, the more pressure is needed for the liquid to flow—and this pressure can require a lot of energy.

Now scientists at the Swiss Federal Institute of Technology in Lausanne (EPFL) say they have developed a new technology to make such systems more energy-efficient. In this novel approach, the microchannel network—whose architectural design was inspired by the human circulatory system—was built within the semiconductor itself, not attached to it afterward. The findings were published on Wednesday in Nature.

Elison Matioli, a professor at the Institute of Electrical Engineering at EPFL, and his colleagues used a chip comprising a thin layer of a semiconducting material called gallium nitride, or GaN, atop a thicker silicon substrate. In an ordinary chip, this substrate just supports the GaN layer. But in the new system, the microchannels are carved within the substrate and positioned to line up exactly with the parts of the chip that tend to heat up the most.

To attack the problem of the high energy needed to pump water or another cooling liquid through the minuscule channels, the researchers designed a distribution network made of wider channels that only narrow in the precise places where the heat is concentrated. This arrangement dramatically decreases the total amount of energy needed.

“It’s like the human circulatory system, which is made of larger blood vessels that only get thinner, transforming into capillaries, in certain areas of the body,” Matioli says. The experiments—some of which had to be done in a lab built in one researcher’s apartment after the COVID-19 pandemic closed the Institute of Electrical Engineering’s facilities—showed that the system’s coefficient of performance (which measures its efficiency) is 50 times higher than that achieved by another cooling technology that uses uniform-width microchannels and is not integrated within the semiconductor.

The major breakthrough of this approach is an innovative fabrication method that integrates the electronic and cooling structures in a single manufacturing process, says Tiwei Wei, who was one of the paper’s peer reviewers and is a researcher at the Interuniversity Microelectronics Center and KU Leuven, both in Belgium. He adds that this integration helps get the microchannels much closer to the specific overheated areas, cooling things down more efficiently.

“It is an important paper because it bridges the gap between two communities: the power-electronics and the electronics-cooling communities. Currently most research treats them separately,” says Xianming (Simon) Dai, who is an assistant professor at the department of mechanical engineering at the University of Texas at Dallas and was not involved with the study.

Thermal engineering is usually an afterthought, considered only after an electric system has been designed. But William King, a professor and Ralph A. Andersen Endowed Chair in mechanical science and engineering at the University of Illinois at Urbana-Champaign, notes that some research groups have begun to consider the concept of codesigning electronics and cooling solutions. “This paper shows an important contribution that really demonstrates what is possible,” says King, who was also not involved with the new paper.

One of the study’s limitations, according to Wei, is that it applied the innovative cooling solution to a relatively simple test case. “A future direction would be applying the concept on a state-of-the-art converter design,” he says, adding that he also has questions about the structural integrity of the thin GaN layer on top of the microchannels. “My concern is that, in the long term, the liquid going through the channels underneath the device could lead to stress that may impact the device.”

King says the next steps in this research should be to show that it is possible to use microfluidic cooling channels in other materials and to explore the possibilities of more advanced three-dimensional geometries. “As this concept matures,” he says, “I believe that the designs will look more and more like a capillary network from the human circulatory system, where large channels link with small channels in a branching architecture.”

King notes that thermal management is a major limitation for all types of electronics—especially power electronic devices such as those used in hybrid and electric vehicles, the electric grid and communications.

“In principle, this technology could be used in all types of electronics: for example, to cool computer chips or in applications like solar panels or electric cars, which may have high power density,” Matioli says. He adds that this is unlikely to offer a practical solution for all electronics, however, because in certain applications, it would not be desirable to have liquid circulating inside the electronic parts.

Matioli sees great potential for this technology in data centers, which consume massive amounts of energy—much of which goes into cooling systems. Together, all the data centers in the U.S. alone consume an amount of electricity and water comparable to the residential needs of a city like Philadelphia, he says. On average, 30 percent of the energy used by data centers goes into cooling. His team’s paper contends that this expenditure could potentially drop significantly by adopting the new approach.