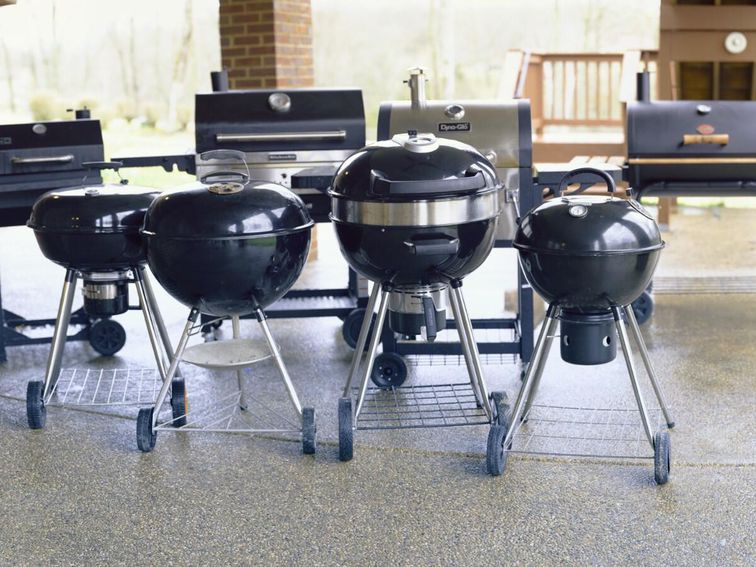 A charcoal grill might lack the complexity and high-tech of a gas model, but the best charcoal grills absolutely compete when it comes to flavor and price.

Charcoal grills are easier to set up than gas grills — all you really need is a bag of charcoal and your favorite ingredients in order to achieve a quick meal with true smoky flavor.

From kettle-style to cart-style, feature-filled to bare minimum, we tested eight charcoal grills with steak, chicken, and ribs to find out which are the best bet for your next cookout.

Weber’s $109 original kettle-style charcoal grill continues to stand the test of time. In our high-heat searing tests, Weber delivered the best balance of seared exterior and medium rare interior steak. The Weber gave us tasty chicken too, with crispy chicken skin. The Weber can also smoke low and slow at rock-steady temperatures. That translated to seriously flavorful ribs.

Simple construction means there aren’t too many parts to assemble or too many features to handle while cooking. A vent on the lid controls air flow and a well-designed ash tray beneath the grill facilitates easy cleanup.

We tested the 22-inch model in black, but Weber also offers an 18-inch version of their original kettle design. There are certainly fancier and more expensive grills to use for cooking, but for a balance of affordability and quality, you can’t go wrong with this classic. This is the best charcoal grill overall.

If you’d prefer to find the best charcoal grill for cooking that is cart-style, the $99 Nexgrill Cart-Style Charcoal Grill proved a worthy challenger to the Weber in our tests. The cart design means you’ll get a helpful side tray and a little more cooking surface area, with 390 square inches of cooking space compared to Weber’s 363 square inches.

Nexgrill definitely seared well, though the meat inside was a bit too done for our preferences. In our medium, indirect heat chicken cooking tests, Nexgrill delivered flavorful, juicy meat as a close second to Weber. Ribs were tender, juicy and done in about 4.5 hours. That said, the Weber had superior temperature control during these low and slow smoking sessions.

Cart-style cooking and grilling isn’t for everyone. It’s bulkier with a more involved assembly and you’ll likely need more fuel to keep the larger space at a high temperature. However, our results were almost as good as the kettle-style Weber, so if you’re interested in a cart-style charcoal grill this is your best bet.

At $279, the Napoleon charcoal grill is expensive. However, during our chicken cooking tests, it held its temperature better than any other charcoal grill. The resulting chicken was tasty, and the grill features really nice cast iron grates across its 365 square inches of cooking area. The lid houses a temperature gauge and a handy hinge that makes it easy to add charcoal.

Napoleon delivered excellent cooking results in our ribs test. It prepared a tender and juicy rack in just 4 hours, 30 minutes. In our chicken test it held a high temperature for longer than any other grill in the lineup. The searing test was average, but satisfactory. This grill just feels really well built. It has three heights for your grates, so you can control just how much direct heat your food gets while cooking and grilling. If you’re looking for the fanciest kettle grill out there, this one might just be it.

Testing charcoal grills means a lot of hands-on cooking experience. Depending on the season, and how your charcoal grill is set up, your experience cooking and grilling will likely be very different from ours. For example, a kettle-style charcoal grill left in the July sun all day will run a lot hotter than a grill in the cooler spring months.

To test high heat, we seared two steaks on each grill. Charcoal was measured in a chimney by grams, and in a ratio for that grill’s specific surface area. We lit the charcoal inside the chimney, letting it burn until the smoke dissipated and the coals began to turn grayish white, then put the charcoal into the grill. Let the grill heat up for 10 minutes, and the steaks are ready to hit the grates.

We placed two steaks on each charcoal grill near the center and seared for five minutes before flipping them over and searing five more minutes. In a good, reliable grill this will give you a steak with a seared outside and medium rare to medium center. Of course, if your taste is meat that’s more done, you can extend the cooking time or sear and finish cooking in an oven.

The best charcoal grill for steak-searing in our lineup was the Weber Classic Kettle. The steak had nice grill marks while keeping a medium doneness on the inside. The worst was our Tacklife review unit, which didn’t hold much heat and didn’t sear while cooking. The steak on that grill needed an additional 5 minutes to get to a temperature of 135, the minimum for medium rare.

Next, we tested each grill’s medium heat cooking capability by roasting whole chickens. The trick here is to keep the grills at a hot enough temperature to cook a chicken for upwards of two hours. Each grill got a full chimney of charcoal, and we placed one six-pound chicken on each grill, opposite the coals for indirect heat.

Cooking over charcoal took longer than cooking with a gas grill, and we did have to add more fuel to keep our grills above 300 degrees. Our favorite bird from this batch was the one cooked on the Weber, though it was a tough call. The Nexgrill cart-style grill came in right behind, a close second in terms of flavor and texture.

The difference between the two was largely in the crispiness of the skin, with Weber being superior. Meat from the Nexgrill was delicious, with just a bit more flavor than the Weber. Between the two, I’d say it largely depends on your budget and what style of grill you prefer for other meats like burgers or steak. Weber certainly had the superior sear in that category.

Our last test centers around barbecue ribs, specifically baby back pork ribs. This style of cooking requires strict temperature control over a period of multiple hours. Ideally, a quality charcoal grill (or any smoker) will keep its fire humming along as close to 225 degrees F (107.2 C), for as long as possible.

To that end, we set up each grill for a low and slow burn, using the charcoal snake method. In the case of kettle models, we arrange coals in a semicircle around the grill’s inner wall. The charcoal briquettes (Kingsford Blue) form a line two coals wide and two coals deep. We also drop a few chunks of smokewood on top of the snake (aka fuse). On cart-style grills, we modify the snake to run in right angles to match their rectangular-shaped fireboxes.

Next, we light each grill’s snake, at one end of the chain, with five lit briquettes (tumbleweed fire starters work, too). We set all air vents on each grill (top and bottom) to the halfway open position. Lastly, we place one rack of ribs on each grill, for indirect cooking (not directly above the coals)

The Weber was the undisputed king on this test. No other grill in this group could match the rock-solid temperature control of this iconic cooker. Readings from our own thermocouples, plus a digital pit thermometer, confirmed this. Throughout the Weber’s 6 hour, 32 minute cook time, the grill’s internal heat levels never wandered beyond 25 degrees of the our target (225 F). In fact, most of the time the temperature hovered between 220 and 230 degrees (F). As a result, ribs cooked in the Weber came out tender, juicy and full of smoke flavor.

The Napoleon grill was the second best on this test. Interior temperatures had a greater swing, jumping up to 300 degrees (F) during periods of the cook. Its rack of ribs was ready in a short 4 hours, 30 minutes too. And while its ribs came tender and juicy overall, the exterior bark had a few burnt spots.

We noted similar temperature performance from the NexGrill, along with similar rib results. Cooking ribs low and slow on the the NexGrill required just 4 hours, 30 minutes. Its rack came out well too, though like the Napoleon, its bark was more pronounced than what the Weber produced.

Our rib experience with a few of the other grills was far from ideal. The TackLife was particularly bad. At times the inside of this grill hit temperatures as high as 400 degrees (F). And sadly, the ribs it produced came out burned, charred and overdone.

The CNET Smart Home editors have been serving up grill data for a few years now. In addition to the models we recommend above, here are the other charcoal grills we’ve tested: