Amazon India’s four year old grocery delivery app Prime Now — which launched as Amazon Now in 2016 — is all set to shut down, as it failed to grow in the way that Amazon had hoped. Moving forward, people will be able to order groceries, and other items like electronics with a two hour delivery, from the main Amazon app instead. Prime Now recorded over 10 millions downloads on Google Play. Although Apple doesn’t release the number of downloads on the App Store, the Prime Now app has received only 327 ratings, suggesting far fewer downloads on iOS.

Prime Now will be replaced by Amazon Fresh, as a part of the main Amazon app. Originally introduced in August last year in India, Amazon Fresh was initially serving only select pin codes in Bengaluru. However, the company has now expanded it to six cities. 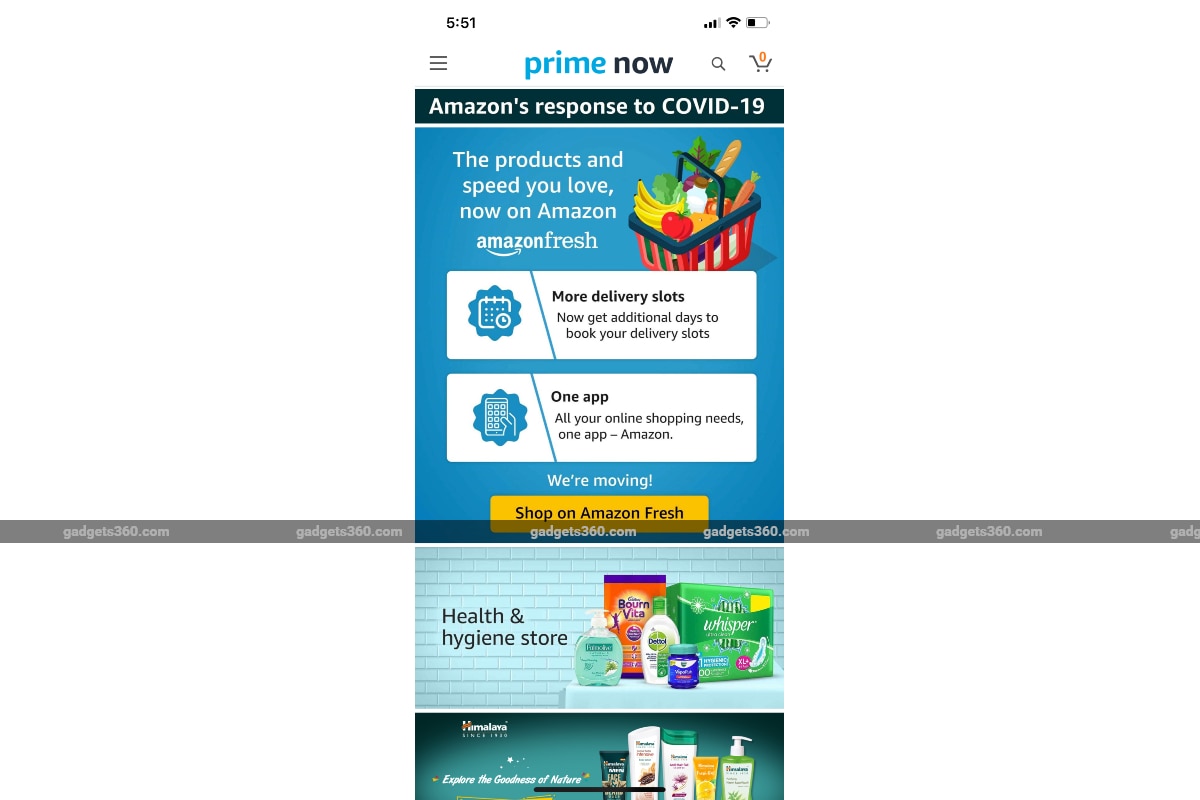 Gadgets 360 found a banner in the Prime Now app — pictured above and since removed — showing that its features will be shifted to the main Amazon app. We reached out to Amazon to confirm this development, but the company declined to comment. However, an employee who isn’t officially authorised to speak on the matter confirmed that this switch was initially planned to be announced around this time of the year, but has been delayed because of the coronavirus-related lockdown in India.

In addition to the latest change for Prime Now, Amazon also recently updated its India app. The company has also started warning users that the support for the global app is being discontinued, and that they should instead switch to the new Amazon India Shopping app, which includes features like UPI, and money transfers. According to Amazon, shopping history, transactions, payment instruments, and addresses, will all be automatically migrated to the new app.

Online grocery has been a continuing challenge that all the big e-commerce companies have worked on but not been very successful. Similar to Amazon, Flipkart brought SuperMart to sell groceries back in August 2018. The online store got expanded to cities such as Bengaluru, Chennai, Hyderabad, Mumbai, and New Delhi, but it is yet to become a household name even for the customers who actively use online platforms to order their daily essentials.

The ongoing lockdown that restricted millions of Indians to purchase grocery items from their nearby store provided opportunities companies such as BigBasket and Grofers to grow their delivery businesses. It also attracted startups from Paytm to Perpule to NoBroker to venture into the market of online grocery deliveries. However, the nationwide lockdown has been an acid test for Amazon and Flipkart that were claiming to fulfil the grocery demands in the country through their platforms. Both are struggling hard to process deliveries and orders of hundreds and thousands of their customers.

Aside from online deliveries, the e-commerce majors have also made inroads into the brick and mortar business in order to try and secure a foothold in groceries and household essentials. In September 2018, Amazon purchased the More chain of grocery stores from Aditya Birla Retail, after reportedly engaging in talks with other brick and mortar daily needs suppliers including Big Bazaar owner Future Group. The latter, however, also explored ways to enter the e-commerce market in India. Nevertheless, the Indian conglomerate tied up with Amazon India in January to offer its Future Retail stores and consumer brands through the Amazon.in site and sell goods via Prime Now.

Last year, it was reported that Amazon’s Prime Now offering was facing trouble, and was at risk of shutting down — and although Amazon quickly denied the report, it seems like this wasn’t too far off the mark. According to the report, the company was facing issues with its reach, but also finding appropriate vendors and suppliers. The report stated that Prime Now wasn’t getting the traction needed, at a time when competitors like Swiggy Stores, Dunzo, and BigBasket were all growing fast.

Looking at the image on Prime Now, it’s clear that Amazon is now in a position to fold the service into the main Amazon app, and offer features such as two-hour delivery, as a part of Amazon Fresh.

Amazon Fresh offered grocery items such as fruits and vegetables, dairy, meat, ice creams, and dry groceries including staples as well as packaged food, directly through the Amazon app. The company recently expanded the reach of Amazon Fresh service to a total of six cities across India, namely Bengaluru, Delhi, Gurugram, Hyderabad, Mumbai, and Noida.

The transition from Prime Now would help Amazon deliver a unified purchase experience through its standalone app. It might also allow Amazon to offer this feature to users who haven’t subscribed to Amazon Prime, unlike the Prime Now app, which after all has the subscription right in its name. The Prime Now app was launched as a rebrand of Amazon Now in the country. It was initially designed to fulfil grocery needs, though it received an update in the later part of 2018 with the option to let customers purchase Amazon Echo and Kindle devices. The app also added smartphones and accessories to its portfolio, and is currently live in Bengaluru, Delhi-NCR, Hyderabad, and Mumbai.

Amazon currently offers two-hour deliveries through Prime Now, but according to the Amazon employee that spoke to Gadgets 360, this feature will be moved to the regular Amazon app for certain items — essentially the ones that will be available through Amazon Fresh. This will come into effect after the company announces the update officially, which is expected to happen soon after the COVID-19 lockdown comes to an end.