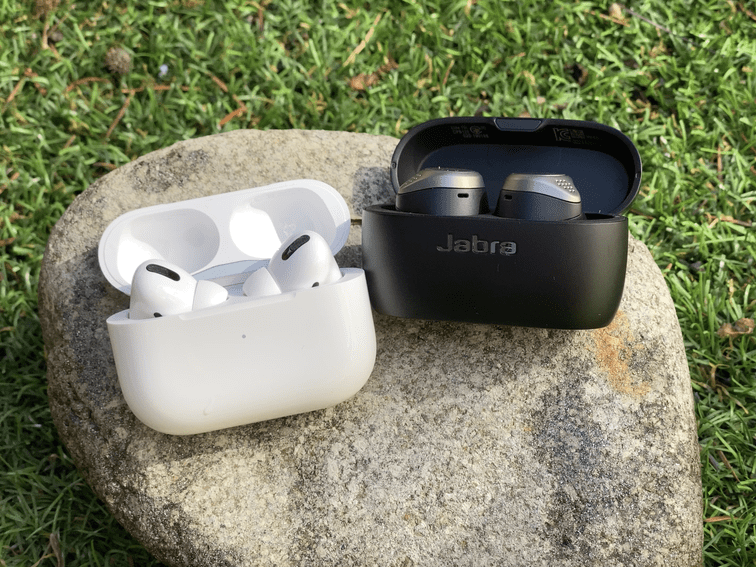 The AirPods Pro are excellent wireless earbuds with effective noise canceling that’s almost as good as a pair of over-ear headphones. They also work seamlessly with the iPhone and other Apple devices. But other options cost less than the AirPods’ $250 (£249 or AU$399) asking price, such as the Galaxy Buds Plus, Amazon Echo Buds and Jabra Elite 75t. I’ve used both the AirPods Pro and Elite 75t for several months to fully compare them on sound quality, battery life, comfort and connectivity. Here’s what I’ve found.

The AirPods Pro are the jack-of-all-trades when it comes to wireless earbuds: great active noise canceling, excellent call quality and good sound. They don’t have as much bass as some other Bluetooth buds, but they offer advantages like transparency mode, which lets you hear the outside world while you’re wearing them and voice-activated Siri that also can read messages aloud in your ears.

Jabra’s wireless earbuds have great audio out of the box and they come with an app that lets you tweak the sound even more. The battery will easily deliver about seven hours of listening time. You may not miss having active noise canceling because the buds sit tightly in the ear and block out a lot of external noise.

AirPods Pro win with transparency mode, but you’ll want to listen to the Jabras more

Both of these earbuds have admirable sound quality. When listening to music, songs across a variety of genres sound more exciting and dynamic and have a much punchier bass response on the Elite 75t than the AirPods Pro when left on default settings. Jabra also has an app (iOS and Android) that offers a quick hearing test, called MySound, to fully personalize the sound profile to your hearing. There are also equalizer presets and a full EQ if you want more control.

The AirPods Pro have an adaptive EQ that’s constantly working behind-the-scenes to tweak the sound according to the shape of your ears, but there’s no dedicated app or consolidated interface to adjust the sound to your liking. You can use an equalizer from apps such as Spotify or Apple Music if you choose.

The AirPods Pro have the edge on call quality for both the caller and the receiver. When you’re making calls, having active noise canceling (ANC) turned on makes it feel like you’re having a quiet conversation even if there’s hubbub around you. The microphone’s position also helps clearly isolate your voice for the other person. That said, callers remarked that the sound of my voice from the Jabras was a little louder than when I made the same call with the AirPods Pro, although they could hear more background noise. Jabra also has a sidetone feature that lets you hear more of your voice when making calls. (So you can avoid shouting!)

Listen to a microphone sample from each in the video above.

Transparency mode on the AirPods Pro (called Hearthrough on the Elite 75t) pipes in some outside sound so you can be more aware of your surroundings. In my experience, Apple’s transparency mode sounds more natural and I’m able to use it for a longer stretch of time than the version on the Jabras, which sounds a little too tinny.

Noise canceling on AirPods Pro is nice, but you may not need it

The ANC technology on the AirPods Pro does an excellent job of suppressing background sound, making the music and podcast-listening experience incredibly satisfying. While the Jabra Elite 75t doesn’t have ANC, it does block out a significant amount of external noise thanks to the in-ear design and snug fit of the interchangeable tips.

The difference between active (AirPods Pro) and passive (Elite 75t) noise canceling is not as dramatic as I initially thought. There are only two situations — commuting or plane travel — where I’d absolutely choose a pair of ANC earbuds over a passive pair with a tight seal. For my ears, the passive blocking on the Elite 75t is so effective that I didn’t miss ANC as much as I thought I would.

The Elite 75t give a snug, secure fit

The AirPods Pro have always been comfortable to wear for longer stretches throughout the day, but the smallest ear tip in the box is still a tad too big for my teensy-tiny ear canals. The seal is tight, but not as snug as Elite 75t’s. The AirPods Pro also refuse stay in my ears as snugly as the Jabras when I was exercising, but your experience will vary.

Both cases conveniently store and charge the buds at the same time, though only Apple’s case will charge wirelessly. (Jabra also sells the Elite Active 75t which have extra water resistance and a wireless charging case.)

Siri fans get the most out of the AirPods

The voice-activated “Hey, Siri” feature lets you call on the assistant hands-free. Siri also can read your text messages aloud when you receive them, which is great when you can’t reach your phone or need to be hands-free. You can use all the voice assistants on the Elite 75t, even Alexa, although you will need to press the button on the buds to activate.

The Jabras were stable, as well, though I noticed a few more dropouts when using them paired to a computer than to a phone. I do enjoy the Jabras can connect to two devices at a time and you hear an audio prompt in your ear to let you know it’s connected to more than one device.

The AirPods Pro have a clickable stem that lets you skip forward and back between songs, flick between ANC and transparency mode, or activate Siri. You can customize it easily from the iOS settings menu. The Elite 75t have a physical button on the earbud that you can also customize from the Sound+ app.

Then there’s also extra juice provided in the cases: 24 hours of total listening time for the AirPods Pro and 28 hours from the Elite 75t.

Are the AirPods Pro or Jabra Elite 75t the best wireless earbuds?

That really depends on how you use your earbuds. Are you a music lover or a multitasker? For listening to music, I always go for the Jabra Elite 75t. If I want to spend the day jumping between calls and listening to a little bit of music, I’d choose the AirPods Pro.

Best for noise canceling and Siri

Best for sound quality and value for money