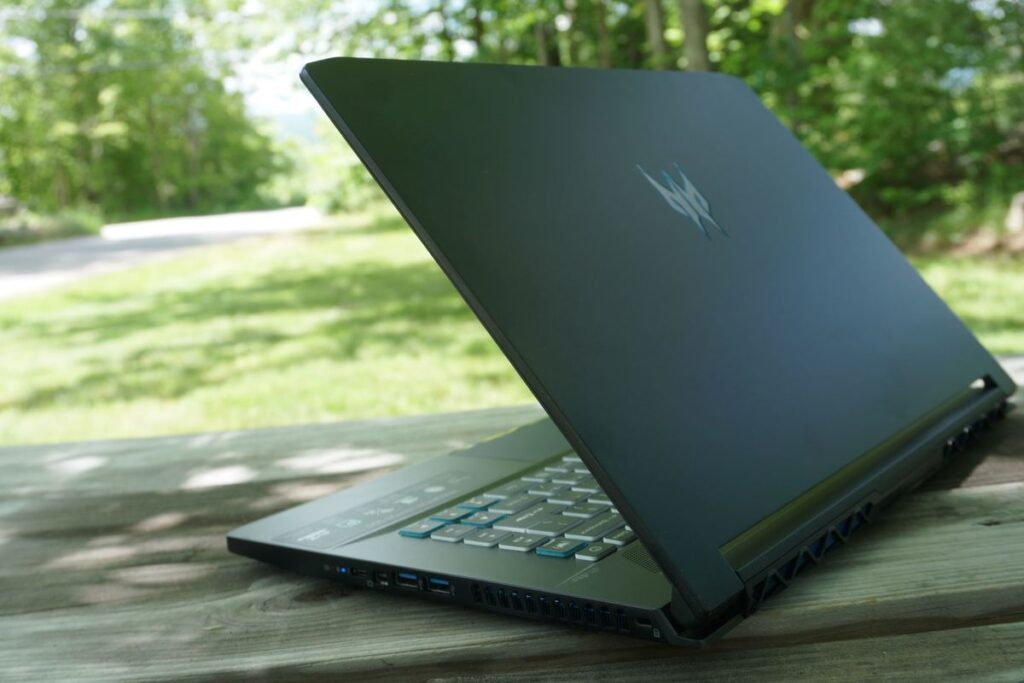 I’ve tested a lot of gaming laptops over the years, but the newly refreshed Acer Predator Triton 500 is the best one I’ve ever had the pleasure of playing on.

For many years, you could only coax enthusiast-class performance out of mammoth gaming laptops that threatened to throw out your back while you carried them around in your bag. The introduction of Nvidia’s energy-efficient Max-Q technology resulted in more portable play-worthy notebooks, but the truly totable ones usually topped out with graphics options below the upper echelon of performance. Gaming on the go always required some sort of compromise.

No more. The Acer Predator Triton 500 brings it all, pairing a 6-core, 12-thread Intel Core i7-10750H processor with Nvidia’s potent new GeForce RTX 2080 Super graphics chip. All that power somehow squeezes into a sublime 4.6-pound aluminum chassis with a lightning-fast 300Hz G-Sync display that offers drop-dead gorgeous contrast ratios. Is it perfect? Not quite. But hot damn, I love it.

Acer sent us the highest-end Triton 500 on offer, loaded with every feature you could ask for. Acer’s site ostensibly lists it for $2,600, but at press time we could only find it available for $2,800 at B&H Photo. You get a lot of hardware for all those pennies.

There’s not much more you could ask for. The included Samsung NVMe SSD blazes along, but if you want even faster speeds, there’s another M.2 slot for expansion, and Acer loaded the laptop with Intel software ready to get a dual-SSD setup humming in RAID 0.

The storage and RAM are difficult to access, however. The Triton 500 uses an inverted motherboard design, which means you’ll need to yank out ribbon cables and the entire motherboard to access the expansion slots. Fortunately, the stock configuration comes with plenty of firepower.

Most aspects of the Acer Predator Triton 500’s design carry over from last year’s model, and that’s perfectly fine, as this is a wonderfully crafted, fantastically compact laptop. The mere 4.6-pound weight firmly plants the Triton 500 in the thin-and-light gaming territory. Laptops with similar heft tend to offer slower graphics options and other components, driving home just how special this notebook is. This powerhouse feels great tucked under your arm and won’t weigh down your backpack like other monster gaming laptops.

Aesthetics are always subjective, but I adore the sleek, black, aluminum design. There’s no mistaking this for a ho-hum workstation, thanks to the silver Predator logo emblazoned in the middle of the lid (and augmented by a blue backlight). But like Razer’s Blade lineup, the Triton 500 wouldn’t stick out like a sore thumb in an office meeting either. It’s tasteful.

This laptop makes games look great, too. While last year’s model went with a fairly standard 144Hz display, the new Predator Triton 500 delivers an amped-up screen to match the ferocious GeForce RTX 2080 Super Max-Q inside. The 1920×1080 panel—the perfect resolution for a gaming laptop this size, 4K be damned—runs at a ludicrous 300Hz with a rapid 1 millisecond grey-to-grey response time, and better yet, it supports Nvidia’s buttery-smooth G-Sync technology. Playing on this rig is an absolute joy. Hell, just mousing around the desktop feels great. Everything looks super-crisp.

The screen isn’t especially bright, topping out at 275 nits in our test. You’ll want to find a shaded area if you’re using the Triton 500 outside on a sunny day. That said, the image itself looks great for gaming and general use, with spectacular contrast and support for 100 percent of the sRGB spectrum.

The Triton 500 sounds pretty decent for a laptop too. Acer’s TrueHarmony speakers deliver solid volume and clarity, though like all notebook speakers, they won’t blow away audiophiles. Bass could be deeper, there’s a tendency towards tinnier tones, and the volume won’t impress while the fans are whirring under load. Chuck some gaming headphones into your bag if you can. The laptop comes with DTS:X Ultra surround sound software to make headphone audio more realistic.

We were happy with the Triton 500’s keyboard and touchpad setup last year, and it remains the same this year. Once again, the subtly concave keys feel great under your fingers, and we’re happy that Acer opted for full-size cursor keys rather than the compact monstrosities found on some laptops. Our biggest gripe from the 2019 model has been fixed, too, with Acer now offering customizable backlighting on a per-key basis in the PredatorSense app. Last year, you could only configure the lighting in three large zones.

The smooth, comfortable touchpad works like a charm and comes properly centered under the Y key. Too many laptops put their touchpads in bizarre places these days, so it’s great to see Acer stick to the classic placement. While clicks registered just fine, I’d have preferred the addition of discrete mouse buttons at the bottom. Yes, fine, most mobile gamers deploy gaming mice for better control. As a tactics lover, however, I was playing XCOM: Chimera Squad while testing out the Triton, and the only thing keeping it from being a perfect experience sans a discrete mouse was the touchpad’s lack of a right mouse button. Double-pressing the touchpad to right click just doesn’t offer the same accuracy in the heat of the moment and fatigues your fingers during an extended session.

You’ll find (subtle) ventilation ports galore on the edges and bottom of the laptop to exhaust the heat generated by its potent internal hardware. Acer supplements those with Vortex Flow, “a new design involving three custom-engineered fans strategically placed in the chassis, working in tandem to increase additional airflow while also reducing noise.” The company also added five new heat pipes to the Triton 500’s design, along with redesigned fourth-generation AeroBlade3D fans inside that achieve up to 45 percent greater airflow than their predecessors, bolstered by Acer’s CoolBoost technology for increasing fan speeds under load. All told, Acer’s reviewers guide claims the new Triton 500 “gets 33 percent better thermal performance than its 2019 counterpart.”

The combination does a pretty good job of dissipating the heat spewing from such high-end hardware. The Triton 500 holds up fine on your lap for everyday tasks like email and YouTube videos. If you decide to game from a comfy chair for the hour or so that this laptop can play for when you’re away from a wall socket, the chassis gets warm, but not uncomfortably hot. Likewise, the case fans kick up to a noticeable volume when the laptop’s under load, but it’s not an unpleasant noise. We’re much more bothered when laptop fans sound tinny or high-pitched or oscillating; the Triton 500 gets loud, yet it also fades almost into white noise, especially if you’re using headphones.

Considering that this tiny laptop’s cooling system is taming a six-core Core i7 chip and Nvidia’s most powerful graphics chip, there’s nothing to complain about.

The PredatorSense software Acer preinstalls on the Triton 500 serves as your gaming command center, giving you control over RGB lighting, GPU overclocking presets, fan controls, system monitoring, and more. The icons in the upper-right corner offer even more customization options, letting you fine-tune Acer’s TrueHarmony audio for the type of sound you’re listening to and activate features like LCD overdrive and the ability to disable Nvidia’s discrete GPU for better power efficiency when you aren’t gaming. You can only overclock the GPU when plugged in with greater than 40 percent battery life remaining, but it’s worthwhile if you meet those demands. More on that later. (You can also overclock the GPU using a nifty Turbo button over the keyboard.)

DTS and Killer apps help manage your audio and networking, respectively, while Nvidia software and XSplit Gamecaster serve gamers. Acer also loads up the Triton 500 with Netflix, Dropbox, Norton Security Ultra, Firefox, ExpressVPN, CyberLink PhotoDirector, Office, Spotify, and an “Acer Collection S” app with even more. Those are all arguably useful and easily removed, but worth noting when you’re spending $2,600 on a laptop.

Next page: Performance benchmarks and conclusion