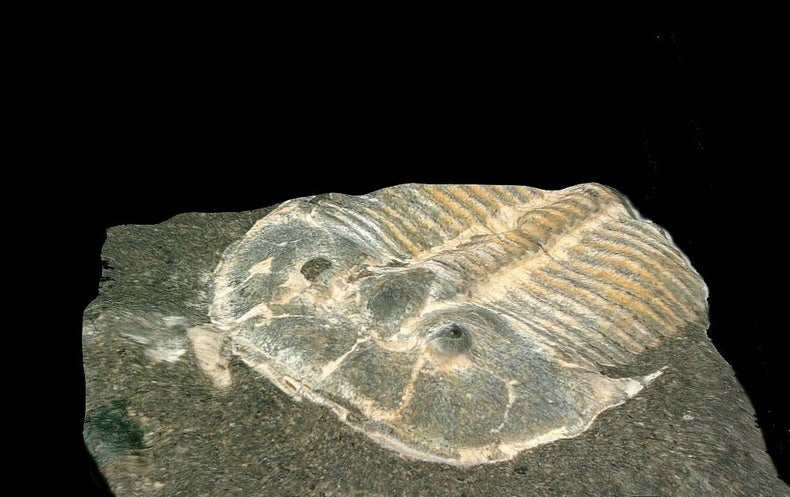 Perfectly pristine fossils might make great museum showpieces, but they are not always the most informative for paleontologists. Some of the more salient secrets of ancient life are locked inside fossils, and lucky breaks can reveal internal details that may otherwise remain hidden. In the case of one particular 429-million-year-old trilobite—an extinct arthropod that looked like a big version of a wood louse—a crack in just the right place has allowed paleontologists to see the world through the creature’s eyes.

Trilobites are one of evolution’s greatest success stories. These early animals, characterized by the “three lobes” of their exoskeletal body, first appeared about 521 million years ago, during the biodiversity spike called the Cambrian explosion. They proliferated for millions of years more, ranging from sizes smaller than a button to bigger than a dinner plate, before going extinct about 252 million years ago. And given how common trilobites were in ancient seas, studying their evolutionary history can offer deep insights into life in our planet’s oceans.

“I always liked these nice Aulacopleura trilobites, with their big heads and big eyes,” says paleontologist Brigitte Schoenemann of the University of Cologne in Germany. “And so I bought one.” Perhaps the fossil would have just been a collector’s item for someone else. But as an expert on the evolution of vision, Schoenemann noticed something unusual about it.

“I was very surprised to see that one eye was broken,” she says. The exposed inner surface revealed the animal’s lens, its receptor cells and other parts of its anatomy. Such detail is uncommon in the fossil record: the preservation of delicate cellular structures, especially in the eyes, often relies on rapid burial in oxygen-depleted environments. Places where this kind of preservation occurs, such as the famous Cambrian Burgess Shale in British Columbia, are few and far between. (The circumstances in which Schoenemann’s Aulacopleura specimen was buried are unclear.)

“For a long time, it was thought that just bones, teeth and other hard objects could be preserved in the fossil record,” she says. “To be able to distinguish cellular structures, especially in the eyes, is very, very rare and exceptional.”

Schoenemann and her co-author Euan Clarkson of the University of Edinburgh in Scotland published their analysis of the ancient eye on Thursday in Scientific Reports. Despite being 429 million years old, the trilobite has a modern-looking eye that resembles those of today’s bees and dragonflies. This type is called an apposition compound eye, meaning each lens acts independently to create a mosaic image of what a creature sees.

The detailed look at the trilobite’s eye helps track the evolution of eyes and vision in arthropods over time, says University of New England paleontologist John Paterson, who was not involved in the new study. “The take-home message appears to be that trilobites had developed apposition compound eyes during the earliest evolutionary stages of the group and stuck with this design throughout their history.”

Drawing from previous studies of trilobite vision, the paper also offers a window into the type of habitat Aulacopleura preferred. The eye’s anatomy indicates the trilobite lived in a bright, shallow-water environment. Given the relationship between lens size and light availability dictated by physics, Schoenemann says, Aulacopleura’s small lenses would have functioned best in bright habitats. Thus, the animal was most likely active during the day.

The trilobite’s eye is very different from our own, Schoenemann notes, because it is made up of dozens of facets that would have created a mosaic image of the creature’s environment. “The eye has about 200 facets and surely is good enough to distinguish obstacles, dark and bright zones in the environment, shelters, shapes and other organisms,” she says—adding that the detected organisms would include the predatory cephalopods that probably munched on trilobites at the time. As Aulacopleura wandered around the ancient shallows, it certainly kept an eye out.