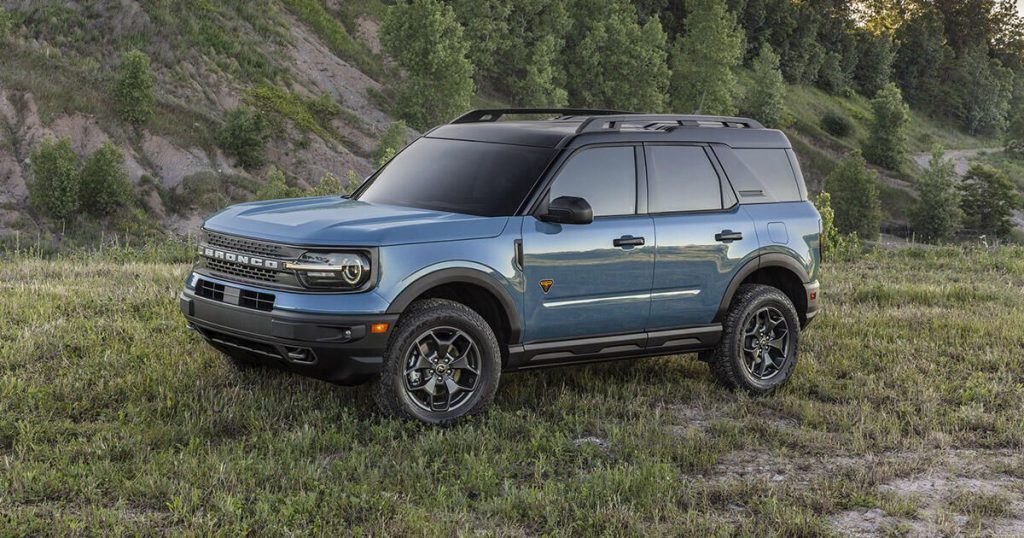 While us dirt-heads are all twitterpated over the new Ford Bronco, you shouldn’t overlook its baby brother, the Bronco Sport. This smaller crossover isn’t just a commuter and kid-hauler; it looks to have some serious off-road chops of its own. Sure, the Sport won’t get you over the hardest trails in Moab, but it should be perfect for smaller adventures like getting to an awesome mountain bike trail or out to a secluded campground.

Having said that, let’s take a look at how the Bronco Sport — in Badlands trim, with its largest available tires — compares with its closest competitor, the Jeep Compass Trailhawk. To be clear, we haven’t driven the Bronco Sport, so we’re just keeping this to specs for now.

The 2021 Ford Bronco Sport is a killer basecamp

The Bronco Sport and the Compass are fairly evenly matched in terms of size, though the Jeep is a little shorter in wheelbase and slightly longer overall. The Compass is also narrower, which should help it avoid the “off-road pinstripe” paint job that results from branches scratching the paint.

When it comes to power, the Bronco Sport comes standard with a 1.5-liter EcoBoost three-cylinder engine, but note that our Badlands trim is only available with the larger 2.0-liter EcoBoost I4. Regardless, both beat the power coming out of the Compass’ 2.4-liter naturally aspirated engine. The Bronco Sport gets an eight-speed automatic transmission, and while a six-speed manual is available on other trims of the Compass, in Trailhawk form it gets a nine-speed automatic.

When it comes to getting off the beaten path, a vehicle’s geometry, crawl ratio and locking differentials all play a part. First, the approach, departure and breakover angles are key. After all, you can’t get over an obstacle if you can’t clear it. Tires play a big part here too, and the largest rubber on the Jeep Compass measures 28 inches, while you can get 29-inch tires on the Bronco Sport. Those larger tires don’t seem to help the Bronco much when it comes to overall numbers, however. It beats the Compass in approach and departure angles, but not by much. The Compass’ shorter wheelbase means it has a much better breakover angle than the Bronco Sport.

Off-roaders also love to talk about crawl ratios. I know you didn’t sign up for a math class, so let’s just say that there are a lot of variables here and what comes out is a representation of how much the torque is multiplied before it makes its way to the ground. A vehicle with a lot of torque and a high crawl ratio should be able to creep over obstacles in a slow and controlled manner.

While the Bronco Sport Badlands has a lower crawl ratio, it also starts off with more torque: 275 pound-feet out of the 2.0-liter engine, compared to the Compass’ 175 lb-ft. Once all the math is done, the Bronco should out-crawl the Compass handily.

When it comes to differential lockers, neither vehicle has one in a traditional engineering sense. The Compass has an all-wheel-drive lock feature that will throw more torque to the rear and change up the traction control parameters, but it can’t distribute the power equally to the rear wheels. The Bronco Sport has a twin-clutch rear end that can function as a traditional locker but also throw all the torque to one wheel if need be.

Based on these specs alone, the Bronco Sport looks to be a worthy adversary to the venerable Jeep. In fact, even if you stepped up to the larger Cherokee Trailhawk, the Bronco Sport makes a respectable showing power-wise when compared with the Jeep’s 2.0-liter turbo I4 and optional 3.2-liter V6. My advice? Don’t write off the Bronco Sport as just another cute ute; it looks to have plenty of capability.