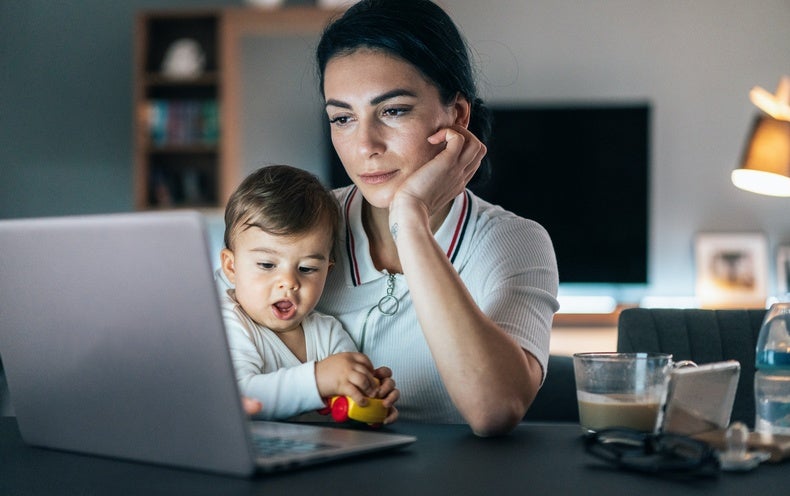 On a recent weeknight, biochemist and postdoctoral researcher Emilia Arturo read to her two children, tucked them into bed, then slipped into her car and drove 15 minutes to the La Jolla Institute for Immunology in California, arriving just after 10 P.M. In the lab, Arturo prepared grids of viral proteins to better visualize a particular pathogen—a type of arenavirus—and discover how to neutralize it.

She did not leave until nearly 4 A.M.

Although Arturo regularly pulled all-nighters as a graduate student, she is not a night owl by nature. The pandemic has forced her to be one to get her work done. Arturo is a single parent with no in-state relatives, and with summer camps offering significantly reduced hours, the only time she can count on help from her live-in partner is overnight. These nights are so exhausting that “I can only handle three of [them] in a week,” she says.

Stories like Arturo’s are becoming common. Early research shows the pandemic is hitting female scientists especially hard as more people are forced to work from home. And women—including those with partners and support systems—perform a disproportionate amount of familial duties, such as caring for children. The research, while unsurprising, raises concerns that COVID-19 could set back women in science significantly. If school and childcare facilities remain closed in the coming months, their careers could be derailed.

One recent study, for example, tallied the apparent gender of U.S.-affiliated authors of nearly 1,900 novel-coronavirus-related medical papers published this year, as well as those of more than 85,000 papers published in the same journals last year. The researchers focused on 2020 studies related to COVID-19 in order to home in on work done after the pandemic disruptions began, says Reshma Jagsi, an oncologist at the University of Michigan and a co-author of the study, which was published in June in eLife. Jagsi and her colleagues found that the proportion of papers with first authors who were women was 19 percent smaller in 2020 than it was in 2019. The percentage of female last authors (who are typically senior-level scientists) was also 5 percent lower this year.

Jagsi says there are many possible explanations for why the pandemic is impacting women more than men in science. But “particularly compelling is the fact that, in a society that still embraces a gendered division of domestic labor, women with children may have been affected disproportionately by school closures and limited access to childcare,” she says.

A recent Understanding America Study survey backs up Jagsi’s assertion: of the 5,900 adults surveyed, 33 percent of employed mothers responded that they have been primarily responsible for providing childcare during COVID-19 school closures, compared with only 7 percent of employed fathers.

A May analysis of more than 300,000 preprint papers and registered reports (descriptions of planned studies) across all fields of science found a similar pattern of women being left out of recent research: they made up a smaller percentage of first authors in the early months of 2020 than they did during the same months last year. That finding is significant, because first authors are typically early-career scientists—and those who are women are more likely to be mothers of small children, says Cassidy Sugimoto, a co-author of the analysis and an information scientist at Indiana University Bloomington.

And a recent survey of more than 4,500 U.S.- and Europe-based scientists—distributed approximately one month after the World Health Organization declared COVID-19 a global pandemic—revealed that female scientists report having less time to spend on research than male scientists: the difference was about five percentage points. The study was published in Nature Human Behaviour.

“The pandemic has involved much more than simply forcing scientists to work from home,” says Kyle Myers, a co-author of the survey of U.S. and European scientists and an economist at Harvard Business School. “It has forced them to manage childcare in new ways, prevented serendipitous conversations in the office hallways, and limited their ability to attend conferences or work at field sites or access certain equipment.”

For Arturo, lost lab hours have meant having to take on fewer projects—and fewer high-risk, high-reward endeavors that might set her apart from others. She has also had less time to collaborate with peers and mentors. “[Postdoctoral researchers] are supposed to not just publish but also get a network—a research network and professional network,” she says. “I have zero time to do that.”

Arturo adds that she began her postdoctoral position with the goal of landing an independent research assignment, “where I might run my own lab as a principal investigator.” About a month ago, however, “I realized I have no chance of running my own lab,” she says. “I can’t keep up with people.”

Crystal D. Rogers, a biologist who leads a less-than-one-year-old laboratory at the University of California, Davis, balances taking care of her five-year-old son and her live-in immunocompromised mother, who recently began chemotherapy treatments. Although Rogers recognizes the need to publish her work—it is “necessary for promotion and tenure,” she says—she has not been able to pursue grants and funding aggressively because of increased responsibilities at home. Rogers says she has no doubt her lab will continue operating, yet she is unsure whether she can attain tenure now. “You have to be excellent to continue moving [forward] in the field,” she says. “But how do you maintain excellence while you’re also trying to balance life?”

Liz McCullagh, a biologist at Oklahoma State University, was teaching her very first class when COVID-19 forced it to go online and her lab to temporarily shutter. She and her husband split watching their two children as evenly as possible. The reality of working at home with kids, however, means that they often interrupt her work, no matter whose parenting “shift” it is, McCullagh says. “It requires a lot more mental energy—even when you’re getting to work—to stay focused on it when there’s a kid screaming downstairs or Dad’s watching [them], but they only want Mom,” she says.

Like Rogers, McCullagh worries that her lack of productivity could hinder her ability to get tenure. And while the chair of her department has advised her to keep notes tracking the tangible things that have prevented her from accomplishing certain benchmarks, she remains unsure of how to quantify the intangible challenges she faces: the anxiety that comes from near-constant stress, concern about meeting her students’ needs in an online setting and workflow interruptions. “Things like that will have long-term impacts, and I can’t put a number on them,” McCullagh says. “That’s really frustrating.”

Experts are concerned that if institutions and employers in science do not recognize the often uneven burden the pandemic and its consequences have had on women, the effects could outlast the public health crisis.

Gretchen Goldman, research director of the Center for Science and Democracy at the Union of Concerned Scientists, leads the Sci-Mom Journeys project at 500 Women Scientists, a nonprofit dedicated to helping make science more inclusive. She handily ticks off a list of women she knows personally who have been forced to only work part-time or labor overnight in order to complete their research. “Our entire support network has been ripped out from under us,” Goldman says. “Some women will be forced out of the workforce entirely,” she adds, warning that “others are being given less work and [fewer] opportunities. It’s so easy for employers to simply just turn around and give it to the [male employee] who has a stay-at-home spouse or who doesn’t have children.”

Indeed, Florida State University recently made headlines when it made an announcement that seemed to say that, starting in early August, it would not allow employees to work from home while taking care of their children. The move was criticized, and the university has since said it will allow employees to work from home while caring for children, as long as they coordinated their schedules with their supervisors. (Many of the female scientists working for a university who were interviewed for this article noted their institution is looking into ways to be supportive.)

“These are highly educated women who could be working on tremendous advancements for humanity and for our planet,” says Kimberly Churches, CEO of the American Association of University Women. “And yet they’re being pulled [out of work] because of the stereotypes about motherhood.” She says institutions should look at changing tenure-track terms—pausing or extending the clock or reevaluating the qualifications to attain it. Flexible work schedules that do not demand 40 hours a week—and often more—would allow women to be both scientists and mothers, Churches says.

“I feel like everybody’s got stuff going on,” Rogers says, “and we just need to be a little bit kinder and more compassionate when it comes to assessing other people and how successful they are as [scientists]. I hope that kind of compassion can make us a better community.”