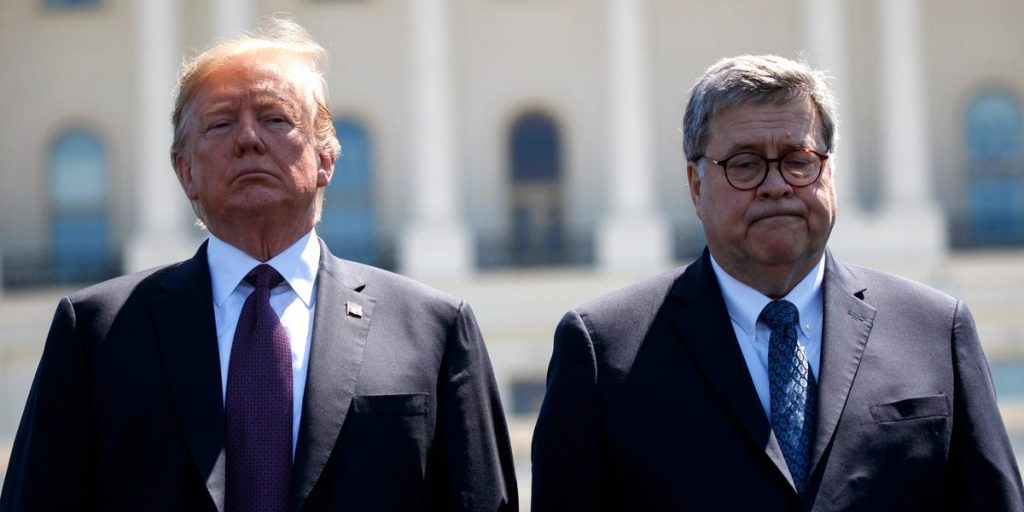 Attorney General William Barr told reporters Wednesday that the Department of Justice’s surprising decision Tuesday to intervene in a lawsuit against President Donald Trump came at the direct request of the White House.

On Tuesday, the DOJ said in court filings that it intends to replace Trump’s personal lawyers in a defamation case brought by advice columnist E. Jean Carroll, who has publicly accused Trump of raping her and sued him in November after he denied the allegations.

While Trump’s personal lawyers have been defending him since then, DOJ lawyers argued Tuesday that Trump was “acting within the scope of his office” when he made the comments, meaning the suit should fall under the Federal Torts Claim Act, which would put the US government on the hook for defending him and taxpayers for covering his legal costs.

The timing and highly unusual nature of the DOJ’s intervention has raised questions about its motivations and drawn scrutiny from legal experts.

Last month, a New York state court ruled that Carroll could proceed with efforts to gather evidence, including DNA samples and a deposition of Trump. But the DOJ’s move, which came on the last day Trump could have appealed the ruling, could stall that discovery process and put Carroll’s case in jeopardy.

Under the FTCA, which is also known as the Westfall Act, federal employees cannot be sued while acting in their official capacity. If the new federal judge assigned to the case, Lewis A. Kaplan, agrees with the DOJ’s rationale for intervening, he could toss the case out.

“This was a normal application of the law,” Barr said in defense of the move, according to The New York Times, adding: “The law is clear. It is done frequently. And the little tempest that is going on is largely because of the bizarre political environment in which we live.”

While the government has won several cases involving the Westfall Act, legal experts have cast doubt on the DOJ’s assertion that the law applies to Carroll’s case against Trump.

“The specific facts here raise the question of whether attacking a private citizen and denigrating her appearance — rather than simply denying her allegations — is part of the president’s job. A court might look skeptically at that,” Ben Berwick, a former DOJ lawyer who worked on civil lawsuits like Carroll’s, told The New York Times.

Barr also didn’t say when the White House made its request.

In a separate press conference Wednesday, reporters asked White House press secretary Kayleigh McEnany whether Trump or other White House officials had discussed the intervention with the DOJ.

“I’m not aware of any discussions that have been had,” McEnany told them, according to CNBC.

Trump is currently facing multiple lawsuits and at least one federal investigation where plaintiffs are seeking subpoenas for his personal and financial records.

In a separate, ongoing defamation lawsuit brought by a woman who accused the president of sexual assault, Trump’s lawyers made a similar claim that he’s immune because he was acting in his official capacity. Trump has denied all claims of sexual assault.

A federal judge earlier this month also struck down Trump’s effort to block Manhattan prosecutors from obtaining his tax returns as part of their investigation into hush-money payments made by the Trump Organization during the 2016 presidential election.

If you are a survivor of sexual assault, you can call the National Sexual Assault Hotline at 800.656.HOPE (4673) or visit their website to receive confidential support.