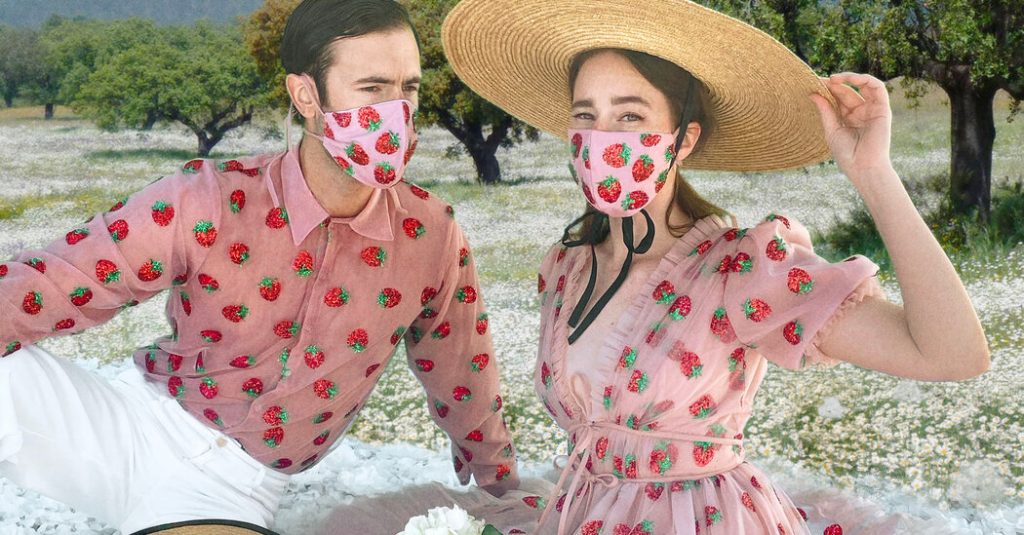 Last summer, a sacklike white dress mottled with black polka dots selling at Zara for $50 was all the rage on Instagram. But while the discomfiting qualities of 2019 may have called for something shapeless and relaxed, the sheer horror of 2020 demands an incredulous level of mythical escapism. Enter: the strawberry dress that took over TikTok.

The dress is a cotton candy cloud dotted with sequined strawberry motifs by Lirika Matoshi, 24, a fashion designer in New York. With its pastel pink tulle overlay, plunging neckline, and gently puffed sleeves, it looks like something Marie Antoinette would wear if she were a modern day influencer.

While the strawberry dress may not have achieved the ubiquity of its Zara counterpart just yet — it costs 10 times more — it is huge on the video platform, where users alternately covet, prance around in or throw shade at the flouncy frock. The common refrain is: “This dress lives rent-free in my head.”

Alongside numerous videos of people unboxing the gossamer gown and modeling it to their followers, an entire subgenre has emerged of disappointed customers pointing out the flaws in the imitation strawberry dresses they’ve bought on Amazon or AliExpress.

The original has inspired fan art, countless memes of Led Zeppelin, Hannibal Lecter and Gollum Photoshopped into the dress, at least one guitar-accompanied ballad and a denunciation from boyfriends in Mel magazine.

“I first saw the dress in early-ish April and noticed it gaining traction over the last few months,” said Avery Mayeur, 20, a content creator and student at Ryerson University in Toronto. “It has exploded in popularity over the last two weeks.” According to Lyst, the global fashion platform, searches for the strawberry dress spiked by 103 percent since the beginning of August. Celebrities including Tess Holliday and, more recently, Busy Philipps’s 12-year-old daughter, Birdie, have worn it.

“The second I laid my eyes on it, I immediately fell in love,” said Ms. Mayeur, whose video unpackaging the strawberry dress has amassed five million views on TikTok. “It reminds me of something you would wear to go to a field with your dog or have a picnic by the lakeshore.”

Ms. Mayeur coveted the dress so deeply that she drew an image of an anime character she invented, Hina Tskurum (who inhabits the “My Hero Academia” universe), decked out in Lirika Matoshi duds. Her followers loved the rendering so much that they began donating to her KO-Fi account in droves, and eventually she amassed enough money to buy the dress.

“It was shocking that my followers cared about me so much and wanted to see me happy that they just gifted this amazing surprise of a dress to me out of the kindness of their own hearts,” Ms. Mayeur said.

Harley Ann Carter, 22, a recent environmental sciences graduate of George Washington University, who lives in Washington, D.C., and uses they/them pronouns, first saw the strawberry dress when Tess Holliday, a model and actress, wore it on the Grammys red carpet in January.

By May, they had saved up enough money from working at their part-time job at a grocery store on a military base to splurge on the dress as a self-bought birthday present: “It makes me feel like a princess.”

Serena Pinuelas, 22, a nonbinary ceramist from Portland, Ore., said, “The dress just really just sparks joy in people during such an unsettling time. It’s kind of like a symbol of hope and empowerment, almost.” Mx. Pinuelas became obsessed with the strawberry dress from the minute they first saw it on the designer’s Instagram.

When it arrived in the mail, “I basically had a little mini heart attack because I was so excited.” The experience of wearing the dress is “probably the best I’ve felt in a few months,” they said.

Mx. Pinuelas is planning a fancy picnic with their roommates — one of whom owns the similarly ethereal Lirika Matoshi star dress — “where we can all feel like we’re in ‘Pride and Prejudice.’”

Incongruously, a special-occasion gown has taken off during a period in history when events have become verboten. “It looks like something you’d wear to a ball or something you’d get married in,” Ms. Carter said.

But maybe this is precisely the reason for the dress’s popularity? “It gives off a vibe of softness and something delicate and unique in a time of trouble,” Ms. Mayeur said. The garment suggests to her “fun times in the future where you can just go out and have fun and not have to worry about getting sick.”

The designer, Lirika Matoshi, said the dress is based on her own recollections of youth. “It reminds you of better times,” she said.

But Ms. Matoshi grew up in Kosovo during the war, and her childhood was hardly a frolic through a sweet-smelling strawberry patch. “I grew up with horror stories of how much damage the war did to our country, how women were raped and innocent people were massacred,” she said. “My only dream was that one day I will travel and I will represent my country and I will help them as much as I can.”

Ms. Matoshi had expected sales of her diaphanous frocks to fall because of the pandemic; instead, she said, sales have increased 1,000 percent since it went on sale in January. “My whole life is this dress,” she said.

Not only is the dress the stuff of saccharine dreams, it also looks good on almost every body type. “It’s such a flattering silhouette. It makes anyone look like a strawberry fairy,” Ms. Mayeur said. “Everyone always looks so happy when they’re wearing it because it’s such a treat to wear.”

For those with the time in quarantine, it’s also readily made at home. “I’m plus size and they don’t carry it in my size — I’m a 22-24 — so I could never own it, even if I really wanted to,” said Sarah Hambly, a 26-year-old content creator from Reno, Nev. (Ms. Matoshi stocks up to size 18, with some custom measurements available.)

Ms. Hambly, who describes her style as “a mix of cottagecore and dark academia,” sewed a strawberry dress using a free pattern from Mood Fabrics and fabric purchased from Etsy and Silk Baron, and posted the experience on TikTok. “I wanted to make a video inspired by the strawberry dress so people who can’t own the original but have the skills to sew can at least have their own version of the dress,” she said.

The relatively high price tag of the original may account for the deluge of fan art depicting celebrities like Harry Styles and countless anime characters enveloped in layers of pink tulle. “I tend to draw the clothes I wish I had,” said Ann Marie Cochrane, 23, a freelance artist from Fort Collins, Colo.

Ms. Cochrane drew Taehyung, of the K-pop band BTS, in the strawberry dress. “BTS preaches that they don’t feel clothing is gendered and they wear a mix of boy’s and girl’s clothes, so I thought it would be nice to draw Taeh in a dress because he’s a very pretty boy.”

Sara Aguilar, 21, an art student at the University of Barcelona, found herself enthralled by the “jellyfish-like silhouette” of the dress, and drew a pair of lesbian witches wearing black and pink companion version. Ms. Aguilar suggests canny artists have gravitated toward drawing the meme of the moment in order to expose more potential fans to their work.

With its toothache-inducing sweetness and naïve charm, the strawberry dress masks the pain of the current moment with a sense of hazy enjoyment. It has captured people’s attention precisely because of its frivolity, harking back to a more innocent time when one could roam unencumbered by the crushing specter of death.

“Even though we are in a pandemic and money’s tight for a lot of people, myself included, one day we’re going to get out of this and be able to do the things we used to do, like get fancy brunch or go to the theater,” Ms. Carter said. “Then we’ll be able to wear it.”