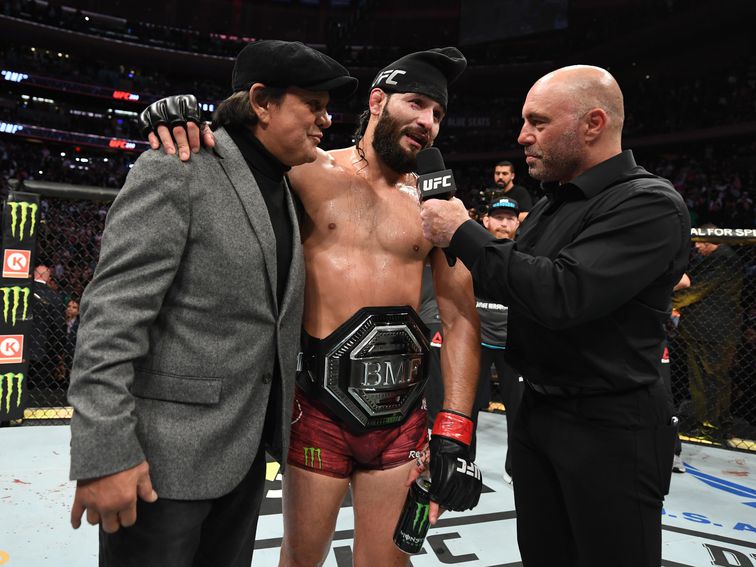 UFC 251 is going to be more exciting that we first thought. And because of COVID-19, it’s going to be a unique fight in UFC history.

Most assumed that the welterweight title would no longer be on the line this Saturday after Gilbert Burns tested positive for COVID-19 and was removed from UFC 251’s main event title fight against Kamaru Usman.

The fight will go on, thanks to Jorge Masvidal, who is perhaps the UFC’s most high profile welterweight.

Masvidal has officially passed a mandatory COVID-19 test, so now the man they call Street Jesus — who most recently beat Nate Diaz for the one-off BMF title — will be replacing Gilbert Burns and facing off against Usman in the main event of UFC 251.

Now all the fighters have made weight and we’re good to go.

Which is great news for fans. Usman versus Masvidal is the fight most people wanted to see in the first place. Previous negotiations between UFC boss Dana White and Masvidal had gone awry, forcing White to go with Burns instead, but desperate times call for desperate measures and it looks like White and Masvidal got the deal done at the 11th hour. This blockbuster title fight is now a go.

Right now Masvidal is one of the most charismatic and high profile fighters in the UFC, so this one should be a biggie. As a style match-up it’s fascinating. Masvidal is a striker with world-class take down defense. Usman is a grinding wrestler, with a great gas tank and an evolving kickboxing game. Given this is a short-notice fight for Masvidal, Usman will be the betting favorite — but remember what happened the last time Masvidal faced off against a grinding wrestler?

You’d be crazy to write off Masvidal here.

But as of today, another interesting wrinkle: Masvidal’s head coach Mike Brown just tested positive for COVID-19. Not sure how that’ll impact the fight at this point, but worth noting.

This year the UFC entered a new partnership with ESPN. That’s great news for the UFC and the expansion of the sport of MMA, but bad news for consumer choice. Especially if you’re one of the UFC fans who want to watch UFC live in the US.

In the US, if you want to know how to watch UFC 251, you’ll only find the fight night on PPV through ESPN Plus. The cost structure is a bit confusing, but here are the options to watch UFC on ESPN, according to ESPN’s site.

You can do all of the above at the link below.

What about the undercard?

It’s fantastic. The main card in particular is spectacular, packing three title fights. Max Holloway attempts to regain his featherweight crown against current champ Alexander Volkanovski. Absolute banger. Petr Yan versus Jose Aldo might not be the bantamweight title fight most MMA experts wanted, but it’s a great match-up featuring two of the best strikers in the UFC.

We also get to see the return of former strawweight queen Rose Namajunas. Man. This is a UFC card for the ages and you’d be crazy to miss it.