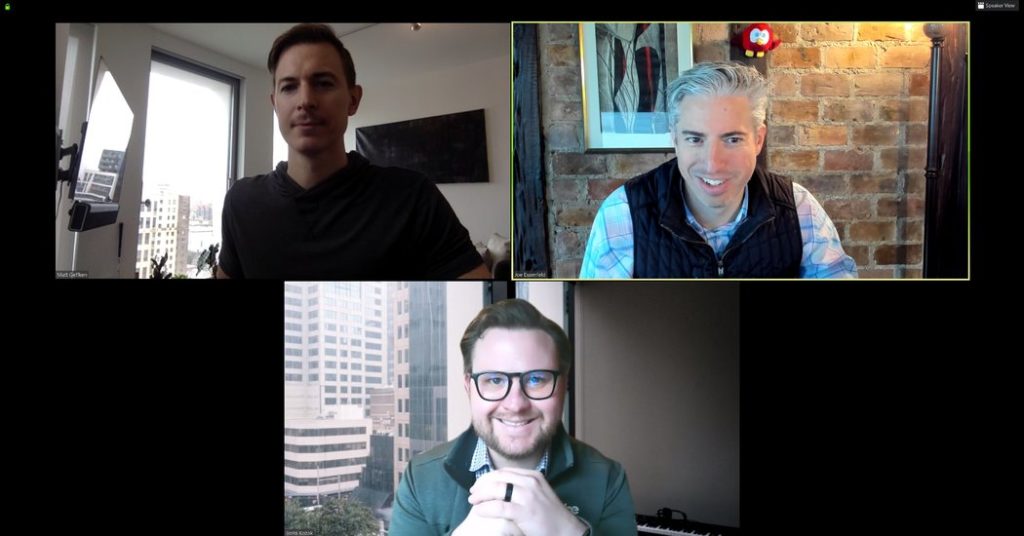 For the past two months, the nine-to-five jobs at their recruiting software company were just the start of a busy work day for Joe Essenfeld, Boris Kozak and Matt Geffken.

After a short break for dinner and a little family time, the three friends would jump on an 8:30 p.m. Zoom call with a dozen other volunteers to work on AllClear, a website to help people find information about testing locations for Covid-19, and stay at it until 2 or 3 a.m.

AllClear now has a directory of more than 10,000 locations in the United States where people can be tested for Covid-19 or for antibodies to the coronavirus. The listing for each location is displayed on a map and contains information such as the test type and whether an appointment is necessary.

The excitement of doing something new felt familiar to the three men, who worked together at Jibe, a software company Mr. Essenfeld started. Last year, Jibe was sold to iCIMS, a recruiting software company where they still work. But there is no financial reward awaiting them this time. They have already spent $35,000 of their own money for something that they promise won’t ever make a cent.

They are representative of a digital volunteerism that has emerged during the pandemic. As the coronavirus has spread and frustration with the federal response to the crisis grew, some entrepreneurs and engineers applied their start-up ethos to help.

Among them are Carl Bass, former chief executive of the software company Autodesk, for example, is assembling 1,500 face shields a day for nurses and doctors from a robotics warehouse in Berkeley, Calif., and sending them across the country. Lan Xuezhao, founding partner of Basis Set Ventures, a venture capital firm in San Francisco, tapped her connections in China to procure tens of thousands of medical masks straight from the factories for hospitals.

When Messrs. Essenfeld, Kozak and Geffken, who all live in the New York metro area, set out to build AllClear in mid-March, the original vision was to create a social network for people to share their experiences with the virus, including whether they had been tested.

It was the type of half-joking, half-serious idea that the trio regularly bounce off one another, like the time they considered selling caffeinated pickles or iced coffee that smelled like hot coffee. But as the seriousness of the pandemic became clear, they felt the itch to do something.

“Feeling powerless during this crisis was difficult to deal with,” Mr. Essenfeld said. “But building this has been helping us cope with that.”

They honed in on making it easy to find testing sites. At the time, it was difficult to find information on where and how people could be tested. The information that was available was dispersed across the internet on a variety of websites and came from local health agencies, hospitals and even social media. The data was often unreliable and inconsistent.

The challenge of collecting and organizing data, however, was familiar to them. At their start-up, they had faced similar issues with job listings, information that changed frequently and was dispersed across the web.

There is no shortage of websites to help people find testing locations. But some are run by local or state health agencies and provide locations only within a specific region. Other websites are run by health care providers and show only affiliated locations. Some sites by volunteer groups use unverified, crowdsourced information. Apple is allowing health care providers and labs to register as testing locations that will appear on Apple Maps, but it requires busy labs and medical offices to come forward.

AllClear’s creators say they believe their site is the only national testing location service providing verified information that is not affiliated with a health care provider or a specific type of test.

“These grass-roots initiatives are a great step in the right direction,” said Jim Kyung-Soo Liew, associate professor of finance at the Johns Hopkins University’s Carey Business School, who created an online tool to track drive-through coronavirus testing sites across the United States. “Being able to test easily is important in helping curb the spread of the disease.”

With no background in medical testing, the three men contacted two doctoral candidates from Cornell University’s medical school for advice. The pair, whom Mr. Essenfeld had met at a genetics conference, were the first to agree to volunteer by helping to organize the specific information to collect about testing sites and how it should be displayed.

The AllClear founders also tapped their professional network from their start-up days, and reached out to Orrick, Herrington & Sutcliffe, a San Francisco law firm that represented Jibe since its early years.

The firm agreed to take on AllClear pro bono to handle the nonprofit paperwork and make sure the project complied with data privacy rules and guidelines for handling health information under the Health Insurance Portability and Accountability Act, or HIPAA. They also drafted terms of service.

The men recruited volunteers to help work on the look and function of the site. They leaned on friends and current and former colleagues to bring on engineers, designers and product strategists. The group has now grown to more than 30 volunteers, many of whom gather on a nightly Zoom planning call.

Mr. Kozak said no one said no when he asked for help.

To collect the information about testing locations, AllClear posted an advertisement on Upwork, which helps companies hire freelancers, looking for researchers to scour the internet. It offered to pay $4 to $7 per hour for the work, depending on the location and experience of the researcher.

After a day, around 130 freelancers from around the world expressed interest. Through interviews, they narrowed the pool to 20 candidates, focusing on those who had demonstrated some knowledge of the virus. On the first night, the 20 candidates came back with information about 2,000 testing locations.

Eventually, AllClear whittled the group down to five researchers — two from India, two from Egypt and one from Poland — who work 40 hours a week and monitor 10 states each. The researchers comb sites from state and local agencies, medical providers and even Twitter for leads on possible testing site information. A team of volunteers verifies that the information is correct before it is published.

So far, AllClear has spent $35,000 to pay researchers as well as cloud computing costs to keep the site up. It is hoping to find a sponsor to pay the running costs.

The site became public in late April. It is drawing several thousand people a day, and soon its location results will start appearing in Google search results.

As the crisis continues, the number of testing sites has grown and the type of information has changed. For example, some locations now offer testing for the virus as well as antibody tests.

The trio said finding testing sites was just the beginning. Ultimately, their goal is to help people go back to living more normal lives.

“Our technology and efforts will continue to focus on helping reduce anxiety around getting tested and finding out the results,” Mr. Essenfeld said.