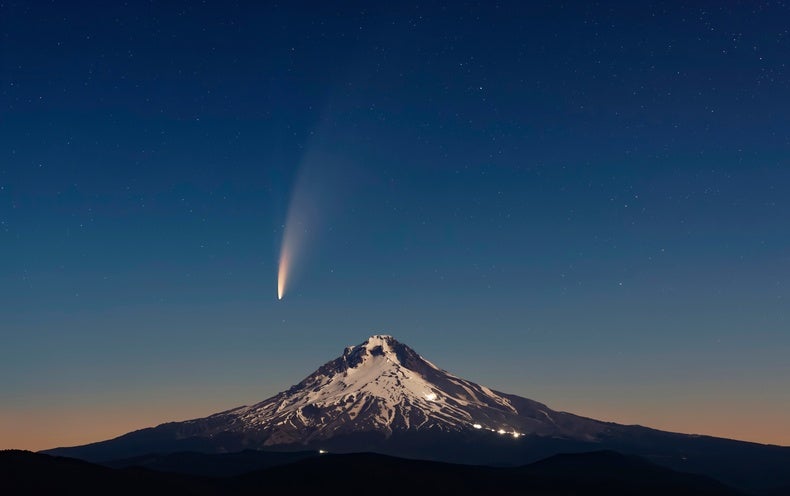 Comet NEOWISE has been entertaining space enthusiasts across the Northern Hemisphere. Although its official name is C/2020 F3, the comet has been dubbed NEOWISE after the Near-Earth Object Wide-Field Infrared Survey Explorer (NEOWISE) space telescope that first noticed it earlier this year. This “icy snowball” with a gassy tail made its closest approach to the sun on July 3 and is now heading back from whence it came: the far reaches of the outer solar system. Its long, looping orbit around our star ensures that after passing closest to Earth on July 22, Comet NEOWISE will not return for some 6,800 years.

Even though the comet is now bright enough to observe with unaided eyes, inexperienced stargazers might have trouble knowing when and where to look. Scientific American spoke to Jackie Faherty, an astronomer at the American Museum of Natural History in New York City, for observing tips and a better appreciation of why comets are so special.

How does one prepare to watch Comet NEOWISE with the naked eye?

Find the darkest possible swath of sky and make sure your eyes are adjusted so that you give yourself the best possible opportunity to see faint objects. It means: don’t just walk outside after staring at lights or screens and expect to see [the comet] really well. You need 15 minutes or so to adjust your eyes, so that your pupils are adjusted, and they’re used to seeing fainter things. It’s the same as walking into a dark room, and everybody knows that [you] can’t see [things] first—and then, all of a sudden, you start seeing things. You need to do the same thing when you walk outside. And use the Comet NEOWISE app developed by astrophysicist Hanno Rein of University of Toronto Scarborough to see exactly where it is, so that you know what direction you need to look. And then the key would be to find yourself a place that is the darkest possible, that [has] no lights.

Which direction should one look?

[The comet] appears [in the evening] in the northwestern sky. But the easiest thing is [to use] the app to help you [find it].

When is the best time to watch?

We’re going to catch [the comet] in the evening sky. We’re calling it primetime viewing, which is when the sun has just set.

Will Comet NEOWISE be brightest when it’s closest to us?

Well, it’s a trade-off. When [the object is] closer to the sun, it’s getting heated up. And so it’s brighter because it’s outgassing [warming so that its ice turns to vapor], and it’s got the light reflecting off of [the gas]. [But] you couldn’t really see it [earlier], when it was in the glare of the sun.

And when it’s closer to us, it gets brighter, because of [the decrease in] distance. Something that’s closer to you is going to be easier to see, even if it’s fainter.

Would we be able to see the comet in megacities such as New York and Los Angeles?

I have seen shots [from] residential areas in L.A. And I can’t believe that people saw the thing through the light pollution in L.A., which I would have thought would be worse than [in] New York City.

What I often advise people during meteor showers, which are similar in some ways, is to go to rooftops. A rooftop can give you a very clear view to the horizon, and it’ll let you get away from light pollution.

Upper Manhattan’s Inwood Hill Park is always an excellent spot for low light pollution in [New York City], or toward the piers on the West Side. New Jersey is not so bad with light pollution when you’re looking in that [northwestern] direction. The Intrepid Sea, Air & Space Museum used to have an excellent spot for stargazing on [its] platform. And amateur astronomers used to go to the High Line [in the neighborhood of Chelsea]—that’s a nice darkish area.

Does it matter where in the U.S. you’re located?

[Your location] will change how high above the horizon [the comet] gets for you. But because this is Northern Hemisphere–accessible, the U.S. has a visibility window that’s excellent for the country. I’ve seen the shots from New York to California to Florida.

Would someone be able to take a good picture using a smartphone?

Your best [bet is] to have [a smartphone’s camera] on a longer exposure. The longer the exposure, the better the picture, because [the comet] is faint, and you will see it as this fuzzy thing. Your eye can’t quite do that for you. You make your eye open, but it can’t record the photons and let them accumulate, and that’s what the camera is able to do.

What is the comet going to do next?

[After] July 22, it gets dimmer and dimmer as it gets farther from Earth. And it very quickly becomes something that you cannot see with your naked eye, even on the clearest night. But [with] binoculars or a telescope, we’ll still be good for seeing it for a while. Then it goes off to the outer part of the solar system, and it’ll be gone for a couple thousand years before it makes the trip back. It has a long orbit around the sun; most comets do. It takes them hundreds or thousands of years in order to go around the sun. They [mostly] hang out in the outer part of the solar system.

Why should anyone care about comets?

If you could capture the comet and bring it back down to Earth and study it in a lab, you would have one of the holy grails for understanding the ingredients to make a planet—and possibly to make it habitable. Like, “How did life get delivered here?” Comets are one of the things we look to for answers. They’ve got all that primordial material that was around to form the planet that would become Earth—being filled with water and have life teeming on it. So from that perspective, a comet is a really important object to study. But we can’t capture it and bring it back down here.

We’ve attempted to land on a comet before. We did this with Comet 67P. It was a European mission, and the whole thing was called Rosetta, with this Philae lander. [Now] we have a really cool mission called OSIRIS-REx. And this is a mission to an asteroid called Bennu that is going to land, acquire a sample and return it to Earth, which is awesome and crazy.

Comets were often markers—omens—before we understood what they were. That’s how people saw them—the bearers of good things, the bearers of bad things. I find it fascinating that in this year 2020 we have a marker in the sky. And it’s a reminder that we should look up more. We should pay attention to the sky [and what] it brings us.

Can anyone predict when the next bright comet will come?

Can we predict the next naked-eye-exciting comet, the one that’s going to come in and wow us all the way that NEOWISE is wowing us right now? There are some that are lining up that will make a good appearance—such as Halley’s Comet, for instance. That orbit is like 80 years or something. So we know when [that comet is] coming; we know when it’s going. But [what] you want to know is: “Is there going to be one next year? Is there going to be one next month?” Unfortunately, comets are just unpredictable, erratic beasts. You don’t know what’s going to happen to them as they get close to the sun. Sometimes they just break apart. Comets are notoriously unpredictable. So I can’t tell you the next one.

The NEOWISE space telescope is monitoring the sky, looking for these kinds of things. And there are several different surveys that are on the lookout for objects that are going to come close to Earth. But who knows when they will find them. That is the beauty of science: scientists are looking at the data every day and trying to find something.