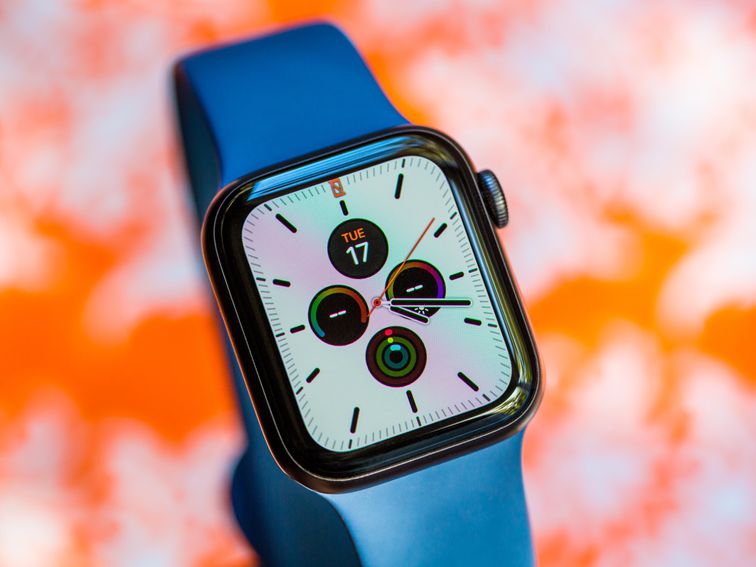 I haven’t always been a fan of the Apple Watch. I bought one as soon as it went on sale in 2015 hoping it would blow me away, but it ended up spending more time in my drawer than on my wrist. It took three more years and the addition of two key features — LTE and the ECG app — for me to finally start wearing it on a regular basis. And now it’s earned a permanent spot on my wrist.

The ‘iWatch’ has arrived

I first started covering the Apple Watch for CNET en Español months before it officially existed. In the summer of 2014 I was hosting a weekly Apple rumor show, and there was already talk of Apple announcing an “iWatch” in the fall.

Sure enough, after presenting the iPhone 6 at the 2014 Sept. 9 event, Apple CEO Tim Cook announced one more thing: the Apple Watch. It was by no means the first of its kind —  Samsung, Motorola and Sony, to name a few, had already launched smartwatches at this point — but Apple hasn’t always concerned itself with having the first of any product. Still, it was a brand new category for Apple, and the first of the post Steve Jobs era (Jobs died almost three years earlier).

After the keynote, I got a chance to see it up close in the demo room. It was certainly intriguing — I remember thinking it was one of the best-looking watches I’d seen. But the bar had been set pretty low. Most of the earlier smartwatches I’d tested were bulkier and definitely geared more toward men than women. The fact that the Apple Watch had two size options (38mm and 42mm) meant it was at least considering more than one gender. But that initial encounter was brief — it took another eight months before I could test it in the real world.

Testing out the original Apple Watch

The aluminum model with the bright green sports band I’d preordered arrived on April 24, the same day it went on sale. In hindsight I probably should’ve opted for a more subdued tone, but I got carried away with the variety of color options.

One of the things I liked from the get go was the ability to check notifications from my wrist. I still like that. I don’t even care how silly I look talking into my wrist, Dick Tracy style, when dictating a response any more. There are also more ways to respond to notifications than before, including the scribble feature.

I liked having Apple Pay on my wrist. The first time I used it at a Jamba Juice in the city, the clerk looked at me like I’d just performed a magic trick. Back then there were only a handful of merchants that accepted Apple Pay, however, so you really had to seek them out.

But my favorite feature, and the one I continue to use the most to this day, was Find my iPhone. It’s right up there with telling the time. The ability to ping my phone has saved me countless hours of searching over the years.

But I also had a lot of complaints about that original Apple Watch. Apps were slow to load and had few features compared to their iPhone counterparts. Instagram, Facebook and Twitter took forever to load and most of the time I ended up pulling out my phone rather than waiting for it to show up on the watch. Plus insta-stalking on a tiny screen just wasn’t as satisfying. Now those apps don’t even exist.

Fitness tracking was lacking, as well. The Watch didn’t have a built-in GPS or elevation tracking, so I still had to run with my phone on me to map my route, defeating the purpose of having a fitness watch in the first place. The only way to access your summary stats on the watch screen was right after you finished your workout. Once it disappeared, you’d have to search in the iPhone app to find your stats.

And I could barely make it through the day without having to charge the battery.

After a week of wearing it, I still couldn’t figure out why I needed an Apple Watch. So rather than publish a regular review video, I decided to let people answer that question for themselves by showing them what it was like to live with the Apple Watch. Once I finished filming the video and the buzz of the release subsided, I would use my Watch sporadically to test out the occasional software update, but it eventually it would go right back into the drawer.

Stay up-to-date on the latest news, reviews and advice on iPhones, iPads, Macs, services and software.

Three years later, with the addition of LTE on the Series 3, my perception of the Apple Watch started to change. I started seeing the Apple Watch as separate from the iPhone. Adding its own cell signal freed the watch, and in turn freed me from having to tote my phone around all the time. Sure, I had major phone withdrawal the first couple of times I left it behind, but I liked the feeling of not having it around to distract me.

Eventually I started turning my phone off when I came home from work to spend more quality time with my baby. I could still log his sleep schedule on the Glow app, answer a text, or check the headlines during those late night feedings, but I wouldn’t spend endless hours scrolling through Instagram at 3 a.m. like a zombie.

It also became my regular running buddy. Before I tried the Series 3 I had used the Apple Watch on off as a fitness tracker, but I preferred running solo for pleasure, and not for the sake of filling a quota on a tracker. I didn’t even listen to music on my runs. I just ran with my phone in case as a safety precaution. But taking my phone along was cumbersome, it would end up stuffed in my sports bra or back pocket of my running pants, if they even had one. Having LTE on the watch meant I could finally leave my phone behind and still be connected. Eventually I also started relying on it for training.

I had two babies within two years, and all of a sudden, I didn’t have the time or energy to go on those long trail runs anymore. I struggled to keep the same level of activity that I had in my past life and the ring system on the Apple Watch helped keep me honest about how much, or how little, I was doing. I became that person that I used to make fun of who obsesses about closing her rings at the end of every day. Now I’ve even started using my fitness data to help get me back to my old running pace.  At six month postpartum I’ve still got a way to go, but I have better ways to track my progress on the Activity app. The Watch now measures your cardio fitness (VO2 Max) and running pace over a longer period of time.

From fitness tracker to health tool

The second game changing Apple Watch feature(s) were the ECG app (or electrocardiogram, sometimes called EKG) and heart-rate notifications, which launched alongside the Series 4. With the update to WatchOS 5, the Apple Watch (Series 1 or later) gained the ability to alert the wearer if their heart rate dips below, or spikes above a certain threshold, or if their heart rhythm is indicative of atrial fibrillation (a dangerous heart condition). People with the Series 4 users can also use the ECG app to send an electrocardiogram to their physician.

And that’s when things got real. I was testing the ECG app alongside a hospital grade ECG for a CNET story when the doctor noticed something strange about my heart rhythm that was showing up on both the watch and his machine. It didn’t turn out to be anything serious — just stress and lack of sleep that made my heart skip a beat, but it freaked me out. As a healthy, active 32-year-old I didn’t think I had to worry about heart issues.

We tested the Apple Watch EKG against a hospital EKG

That Christmas, I gave both my parents an Apple Watch. They live in El Salvador so I can’t be there physically to check-up on their health, but the Apple Watch gave me a way to at least keep tabs on their heart health from afar. The fall detection feature which calls the emergency services if you have a bad fall (on the Series 4 and Series 5), is also a nice safety blanket for aging parents.

There’s still a lot the Apple Watch can improve upon: battery life is at the top of my list, a design refresh, continue adding health features like sleep tracking and blood pressure. But it’s done having to prove itself in my book. Five years later, I finally understand what the Apple Watch is for, and it’s different for everyone. For me about staying connected without the added distractions, and motivating me to stay healthy despite the challenges of being a new mom. Cheers to the next five years.