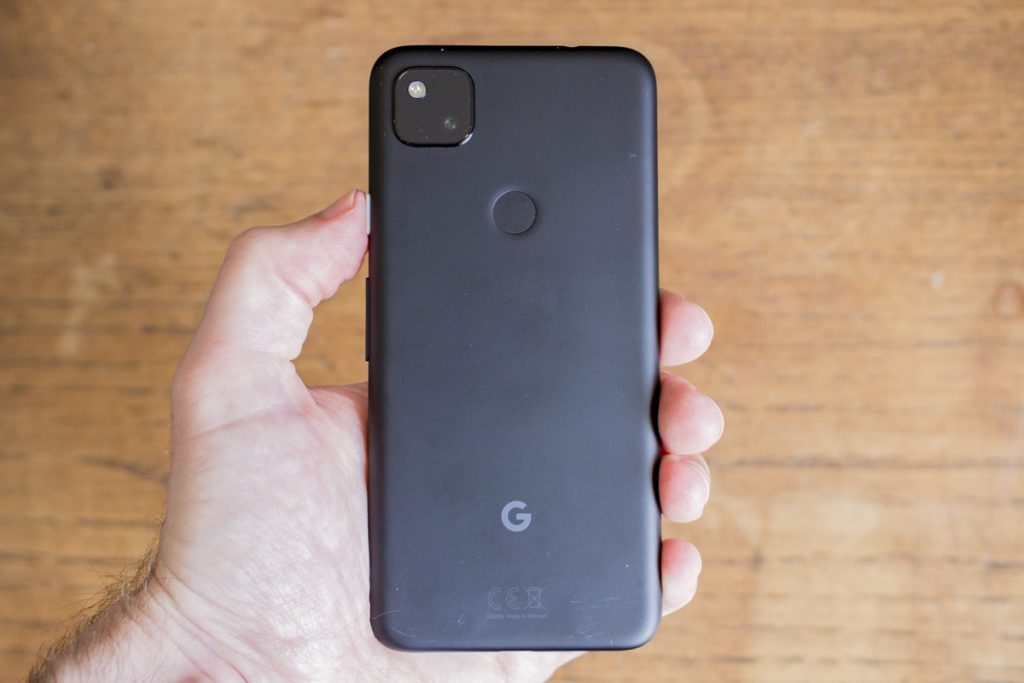 Google’s new Pixel 4a doesn’t have the latest processor, cutting-edge space-zoom cameras, or a 120Hz display. It doesn’t even have wireless charging. But with a $349 price tag, 5.8-inch display, and the best design Google has ever shipped, it just might be able to take on Samsung’s Galaxy Note 20 behemoth arriving later this week.

At first glance, the Pixel 4a doesn’t look much like its namesake, the Pixel 4, but it’s not hard to see the influence in its rounded silhouette and raised square camera array. There’s a sleekness here that we haven’t seen in a Google phone before, though. Google offers just one size of the Pixel 4a and just one color as well, but it’ll likely nail most people’s sweet spot: 5.8 inches and black, with a mint-green power button. That’s right in between the 5.6-inch Pixel 3a and the 6.0-inch Pixel 3a XL, but the Pixel 4a is actually a good deal smaller than even the smaller the 3a thanks to its shrunken bezels:

That not only puts the Pixel 4a in the running for one of the smallest phones around, it’s also far and away the nicest phone Google has ever made. That’s not saying all that much, but the Pixel 4a is a nice-looking phone, with a uniform top and side bezels, a hole-punch camera, and a shocking sense of balance. Yes, the chin is still thicker than the rest of the phone’s bezels, but no thicker than a OnePlus or LG phone, and far thinner than any other Pixel that came before. In short: The Pixel 4a is the first Google phone that looks like it was designed by someone who cares.

The sleeker design gives the phone tremendous pocketability. It’s just 5.5mm taller than the $400 iPhone SE despite having a full inch more of screen, and at 143 grams, it’s one of the lightest phones as well, even lighter than the iPhone SE. Of course, the Pixel 4a’s low weight is largely due to its plastic back, which means you still won’t get wireless charging. That’s not likely to be a deal-breaker for anyone considering the 4a, but it is a glaring omission when stacked up to the iPhone SE.

The rest of the Pixel 4a’s specs are about what you’d expect from a $349 Android phone:

Around the back of the Pixel 4a you’ll find a camera array that looks a lot like the one on the Pixel 4 with one main difference. There’s only one camera inside it, though it is identical to the main sensor on Google’s flagship Pixel 4 phone: 12.2MP wide, f/1.7, OIS.

And it comes with all the trimmings: Dual Exposure, Night Sight, Astrophotography, Portrait Mode, and HDR+. Even with just one camera, you’re not giving up all that much of what makes the Pixel such a great camera phone, and the Pixel 4a will more than hold its own against flagships costing three times as much—even a phone as stacked as the upcoming Galaxy Note 20.

And the best is yet to come. Google has announced that a 5G version of the Pixel 4a will be arriving in the fall for $499, presumably with a faster Snapdragon 765G processor. Assuming it supports both mmwave and sub-6Ghz on every carrier, it would be one of the most affordable 5G phones in the U.S. and would set a very low bar for adoption. Contrast that with the premium crop of 5G phones and you could have a landscaping-chaing release.

On paper, the Pixel 4a has no business competing with a phone as powerful as the Note, and if you rely on the usual benchmarks, it won’t. With a rumored 865+ processor, at least 12GB of RAM, and a giant speedy display, the Note 20 is expected to be one of the most powerful phones ever made.

But the Pixel 4a has a laser-sharp focus on the features that matter. Take the size. Not only will it be significantly smaller—the Pixel 4a is more than 20mm shorter than the Galaxy S20 Ultra—but much lighter too. Compared to previous Notes, the Pixel 4a is practically a feather. And while we don’t know how much the rumored Note 20 Ultra will weigh, it’s likely to tip the scales at around 220 grams (the weight of the S20 Ultra).

The camera might seem laughably underpowered compared to the quad-camera that’s all but confirmed for the Note 20 Ultra, but Google has proven time and again that hardware doesn’t make a great camera. Even without the dedicated Visual Core chip in the Pixel 4 or a 108MP sensor that’s expected in the Note 20, the Pixel 4a is loaded with the same high-end photography features, so night shots, bright shots, and far-away shots will shine.

You’ll have to wait a few months to get 5G on the Pixel 4a—Google says it’s coming this fall for $499, presumably with the faster Snapdragon 765G processor—but that’s hardly a dealbreaker. Yes, the Galaxy Note 20 will surely have 5G on board at launch, but most people won’t mind waiting a few months, especially since it’ll cost about half as much as the Note 20.

But what might make the Pixel 4a such a perfect counterpart to the Note 20 are two features that have long been gone from premium handsets: a headphone jack and a fingerprint sensor. Samsung dumped the fingerprint sensor and the headphone jack from the Note last year, but they live on in the Pixel 4a, which Google says they kept “due to popular demand.” Optical scanners can be finicky and many people still miss headphone jacks, so the Note’s futurism could work against it as people downsize.

So get your popcorn and plug in your headphones. Or grab your Galaxy Buds. Because the most unlikely battle of the year is about to begin.

Update 1:45: This article has been updated with additional information about the Pixel 4a 5G.