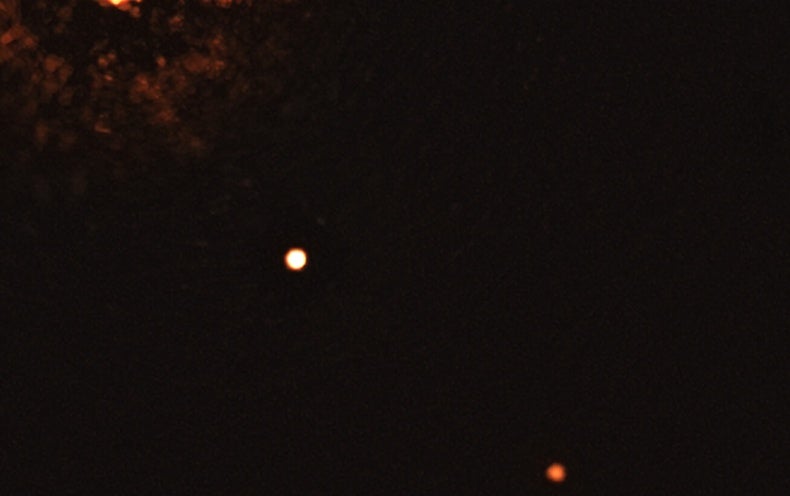 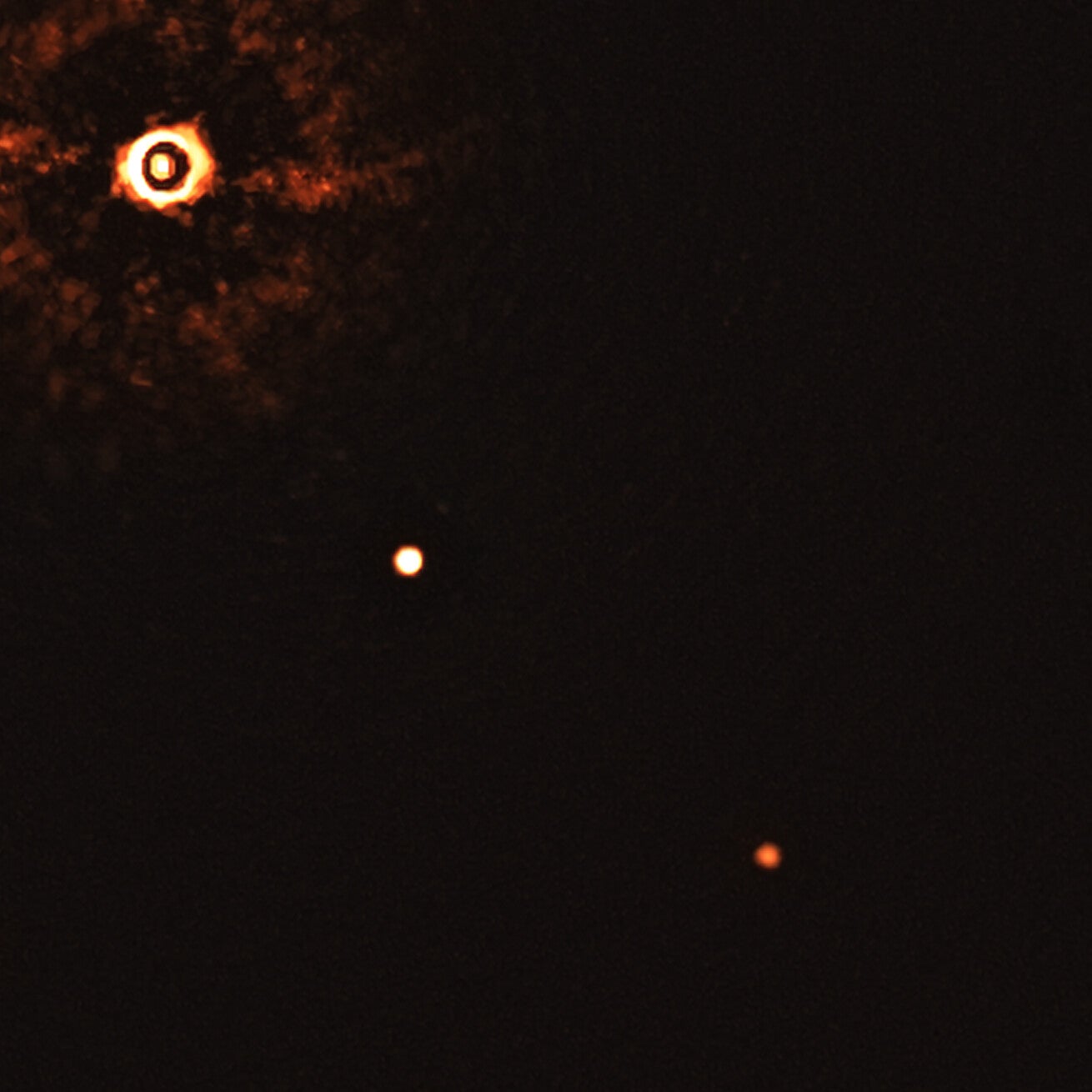 For the first time ever, scientists have managed to capture images of multiple planets twirling about another sunlike star. Yet despite its stellar host’s resemblance to our own, the snapshots of this planetary system reveal it to be no place like home.

Named TYC 8998-760-1 and located about 300 light-years from Earth in the constellation Musca, the star is similar in mass to the sun. Its two known planets, however, are distinctly alien—orbiting their star at about 160 and 320 times the Earth-sun distance, respectively (spans that are about four and eight times greater than Pluto’s separation from our sun). Both worlds are supersized, compared with anything in our solar system. The outermost planet is some six times heavier than Jupiter, and the inner one tips the scales at 14 times Jupiter’s mass. Each of the worlds appears as a small dot around the star in images produced by the Spectro-Polarimetric High-contrast Exoplanet Research instrument, or SPHERE, which operates on the European Southern Observatory’s Very Large Telescope in northern Chile. The findings are detailed in a study published on July 22 in the Astrophysical Journal Letters.

“The really fascinating thing about this work is that [it] continues to add to the vast diversity of what systems and planets are out there, orbiting all sorts of stars,” says Rebecca Oppenheimer, an astrophysicist at the American Museum of Natural History in New York City, who was not involved with the study. “There is no single ‘architecture’ for a planetary system.”

The new study marks only the third time that scientists have managed to take pictures of—or “directly image”—multiple worlds orbiting a single star. But those previously observed systems were around stars either much heavier or lighter than the sun, making them less comparable to our solar system. Direct imaging remains a rarity in the study of worlds beyond our planetary neighborhood. The vast majority of exoplanets in astronomers’ catalogues are known solely through more indirect means: they betray their presence and most basic properties—mass, size and orbit—by periodically tugging on, or silhouetting against, their host stars, as seen from Earth. Directly imaging exoplanets is important, says study lead Alexander Bohn, an astrophysicist at Leiden University in the Netherlands, because by “receiving light from planets, we can better characterize the atmospheres—and elemental abundances of the atmospheres—and the composition.” That information, in turn, allows researchers to make more educated guesses about what an alien world’s environmental conditions could be—and whether or not it might, like Earth, harbor life.

No one is contemplating life on either of the two newly imaged worlds, however. In addition to being bloated gas giants in frigid orbits with no meaningful surfaces on which organisms could dwell, they and their star are far younger than our sun and the planets around it. “The system itself is 17 million years [old],” Bohn says. “And our solar system is 4.5 billion years [old].” Even if they did possess habitable conditions, each world’s relatively newborn status would not offer much time for biology to arise from the vagaries of chemistry. And although their planets’ size and youth makes them poor candidates for life as we know it, these properties are precisely why astronomers can presently see them at all, because of the powerful infrared glow they emit as leftover energy from their formation. Smaller, older, more clement worlds that are closer in to their stars remain out of current planet imagers’ reach. But they could eventually be revealed by more powerful instrumentation on gargantuan telescopes. Already three extremely large telescopes (ELTs)—ground-based observatories with mirrors on the order of 30 meters across—are approaching their final stages of development. And astronomers are vigorously lobbying for NASA or other space agencies to launch even more ambitious planet-imaging space telescopes in coming decades.

Even so, “we’re an incredibly long way from taking pictures of Earth-sized planets,” says Bruce Macintosh, an astrophysicist at Stanford University and principal investigator on the Gemini Planet Imager—another instrument that, along with SPHERE, represents the state of the art in exoplanetary picture taking. “With current technology, we can see a planet that is about one million times fainter than the star. That’s amazing. But even Jupiter—the biggest world in our solar system—is a billion times fainter than the sun.”

Whether a target planet next to a bright star is a giant gaseous orb or a more Earth-like rock, Bohn says, observing it is like viewing “a firefly right next to a lighthouse, which is maybe a meter away. You want to see this tiny firefly, and you are 500 kilometers away. This is basically the challenge we’re dealing with.” To gather the extremely faint light of a world, compared with its star, SPHERE and most other planet-imaging instruments use a device called a coronagraph, which blocks out almost all of the star’s light—effectively dimming the glare from the “lighthouse” so that nearby planetary “fireflies” can be seen.

Besides more nuanced details of any given world, such images can reveal other wonders—and raise important new mysteries—that go to the heart of theorists’ still nascent understanding of precisely how planetary systems emerge and evolve. In the newly imaged system, “both planets formed around the same star and are the same age, but one is twice as massive as the other,” says Macintosh, who was not involved in the study. “Comparing their properties will help us see how the masses of planets affect their evolution.” Further, he adds, subsequent images of the system could reveal more about the planets’ orbits—and even the presence of as yet unseen worlds. “Are they aligned the same way planetary orbits in our solar system are aligned? Are they circular?” Macintosh asks. Learning the answers to such questions could show whether these planets formed in the same way as the worlds around our sun or via some other process—and thereby provide another hint as to whether planets and systems such as our own are common or rare.