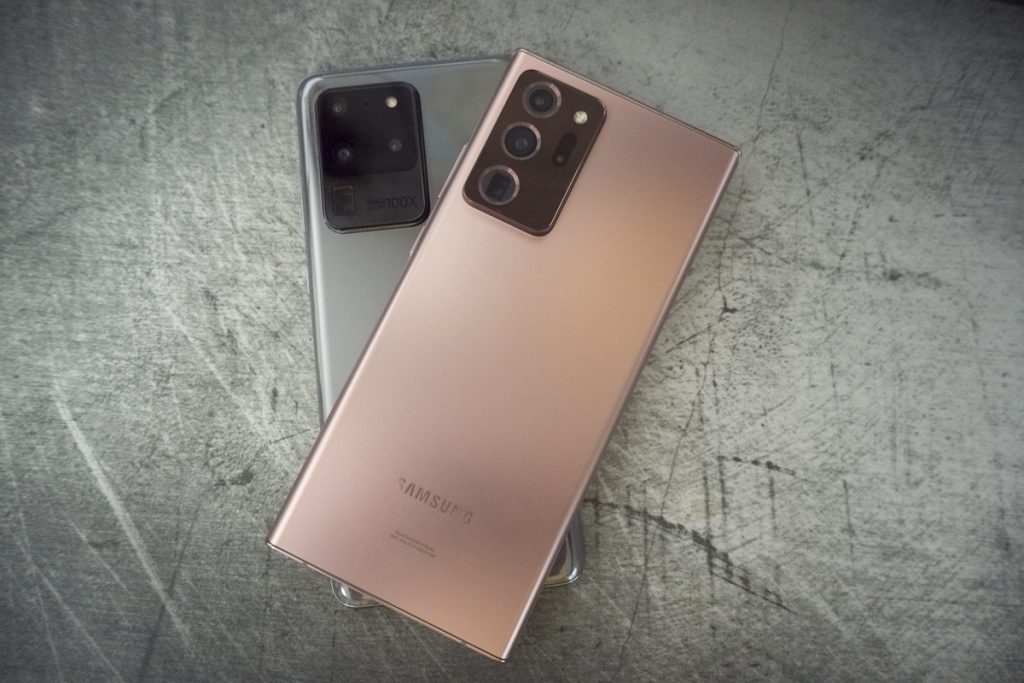 Samsung Galaxy Note 20 Ultra vs S20 Ultra: Which ultimate flagship should get all of your money?

The Ultra phone is here to stay. At its Galaxy Unpacked event last week, Samsung announced two sizes of its Galaxy Note 20 phone. The Galaxy Note 20 Ultra model replaced last year’s Plus model at the top end. That makes two Ultras for Samsung, along with the previously announced Galaxy S20 Ultra.

Which one should you buy (if you can afford the prices, both well north of $1,000)? We’ll go through the major points of comparison to help you decide.

As Samsung’s screens have gotten bigger over the years, the visual differences between the Galaxy S and Galaxy Note phones have shrunken along with the bezels. Both phones are basically all-screen now, with a sliver of black above and below the screen, but their shapes differ. The Note is taller with squared corners, to resemble a notepad, while the S20 is rounded like a transitional phone. But they’re both barely small enough to fit in your pocket:

The phones even look quite similar from the back. Both have a rather large raised camera array in the top left corner, but the Note’s housing has a bit more of a bump (at least Samsung ditched the tacky Space Zoom branding). While they’re both made of glass, the Note has a frosted finish, along with an exclusive “Mystic Bronze” hue that doesn’t reflect light as much as the S20 does, and feels less slippery. It’s a great color and a great look that gives the Note a real elegance.

My pick: Both phones are extremely big and a touch unwieldy due to their gigantic camera bumps. I prefer the S20 ever so slightly, but if you like big phones, you can’t go wrong with either one.

These are Samsung flagships, so both of these phones have excellent screens. It’s hard to find a flaw in either of them:

The S20 Ultra has an infinitesimally higher resolution, and that’s basically it. Both displays support 120Hz refresh, but you’ll need to lower the resolution to Full HD (1080p) to use it.

The only material difference between the two displays is the way the refresh rate activates. On the Note 20 Ultra, the display dynamically switches back to 60Hz when not in use to preserve battery life.

My pick: There’s no bad choice here. Both screens are big, beautiful, and the best in their class, with extremely minor differences nearly impossible to discern. In direct comparisons, the Note 20 Ultra seems to have a slightly better white balance.

The Galaxy Note 20 Ultra and Samsung S20 Ultra have extremely similar specs, with one exception—the processor. The Note 20 Ultra uses the newer Snapdragon 865+ processor, which brings a slight performance boost over the 865 in the S20 Ultra.

Otherwise, you’re getting the same 12GB of LPDDR5 RAM and 128GB of storage (with an expandable memory slot that can add up to 1TB). Both offer 512GB storage upgrades. If you want the top of the top, you’ll also get 16GB of RAM in the S20 Ultra with the extra storage.

The Note 20 Ultra has an ultra-wideband chip for more precise spatial awareness. It’s not very useful now—basically you can send files to other Note 20 users quickly—but it could bring smart unlocking and indoor positioning down the road.

While both premium smartphones have giant batteries, the S20 has a bit more juice at 5,000mAh, versus 4,500mAh on the Note 20. They’ll likely both get you easily through a full day of heavy use. They both come with a 25W charger in the box and support 45W fast-charging with Samsung’s optional adapter.

My pick: I’ll go with the S20 here, because I’d rather have 11 percent more battery than 10 percent more storage. With either, I’d stick with the base 128GB configuration, because you can add extra storage for cheap if you wait for a sale on SD cards.

The Note 20 Ultra and S20 Ultra both have quad-camera arrays, but Samsung has tweaked them a bit for this new generation:

The two have two key differences. The biggest is the telephoto lens. The Note 20 has fewer megapixels and less zoom. I’m still testing the Note 20 Ultra and will have a review soon, but in my experience with the S20, you won’t miss the extra Space Zoom. The zoom is extremely hard to control at 100X, and pictures don’t look so great anyway. At 50X, your pictures will be sharper and easier to shoot. But it’s still very gimmicky.

The other major difference between the two phones is the fourth camera. Neither is a useable camera per se, but they help in very different ways. The S20’s DepthVision lens is a time-of-flight camera that helps with portrait shots and AR apps. You might see a difference when taking Live Photos, but you’ll need a very technical eye. Otherwise, all of the same blur features, including real-time adjustment, are available on both phones.

On the Note 20, however, Samsung has swapped out the time-of-flight sensor for laser autofocus, which could fix one of the S20’s biggest issues: When shooting standard shots with the S20, it could struggle to lock in on a subject. Even after several updates, the problem still crops up from time to time. The laser autofocus is both an admission that the problem exists and a serious attempt to correct it. In my early testing, autofocus is impressively fast on the Note 20.

My pick: While the S20’s camera might seem better on paper, I’m taking the Note 20’s with its laser autofocus. The main sensor is essentially the same, and the benefits of the depth camera aren’t as clear.

The major difference between Samsung’s S and N lines continues to be the inclusion of a stylus on the Note. The Note 20 Ultra brings some new tricks to the party—and a new location, on the bottom left rather than the bottom right—but the biggest change is the latency, which has been reduced to 9ms. I didn’t have any issues with the Note 10’s S Pen, but it’s noticeably improved on the Note 20 and feels as smooth as a ball-point pen.

You’re also getting something with the Galaxy S20 that you’re not getting with the Note 20, at least not in the box: earbuds. However, while Samsung has opted to not include its very-good AKG-tuned earbuds with the Note 20, you can still get a pair for free by contacting Samsung customer service.

My pick: The S Pen isn’t for everyone, but it’s an excellent addition to the Note 20. The new features are gimmicky, but the lower latency makes a noticeable difference in writing and drawing.

Samsung has opted for sophistication over splashiness with its Ultra phones, so you’ll want to slip on a case if you’re looking for personality:

The difference between Mystic and Cosmic is the finish. The Note 20 Ultra has a matte coating that looks and feels fantastic and doesn’t pick up fingerprints nearly as easily as the S20 does. It’s one of the nicest finishes I’ve ever seen in a Galaxy phone, and I hope Samsung uses it for all of its phones going forward.

My pick: Mystic Bronze isn’t just the most beautiful color of this bunch, it’s also one of the best of all time in a Galaxy phone.

If you’re choosing between these two phones, price isn’t really an object. The Note 20 Ultra is actually $100 less than the S20 Ultra, but both phones will set you back a bundle:

My pick: With the $100 savings, you could get a pair of Galaxy Buds Live for just $80, or a case. But you’ll be able to get either of these phones for less than Samsung’s asking price with a trade-in or a sale.

These phones both have Ultra in their names for a reason: They’re basically the best you can buy. Neither choice is a bad one, but the Note 20 Ultra edges out the S20 Ultra. Despite the slightly higher price, but the laser autofocus, but the color options, the processor, and UWB chip are all reasons—along with the S Pen—to opt for the Note 20 Ultra.

Update 9:45am: Added dimensions for both phones.