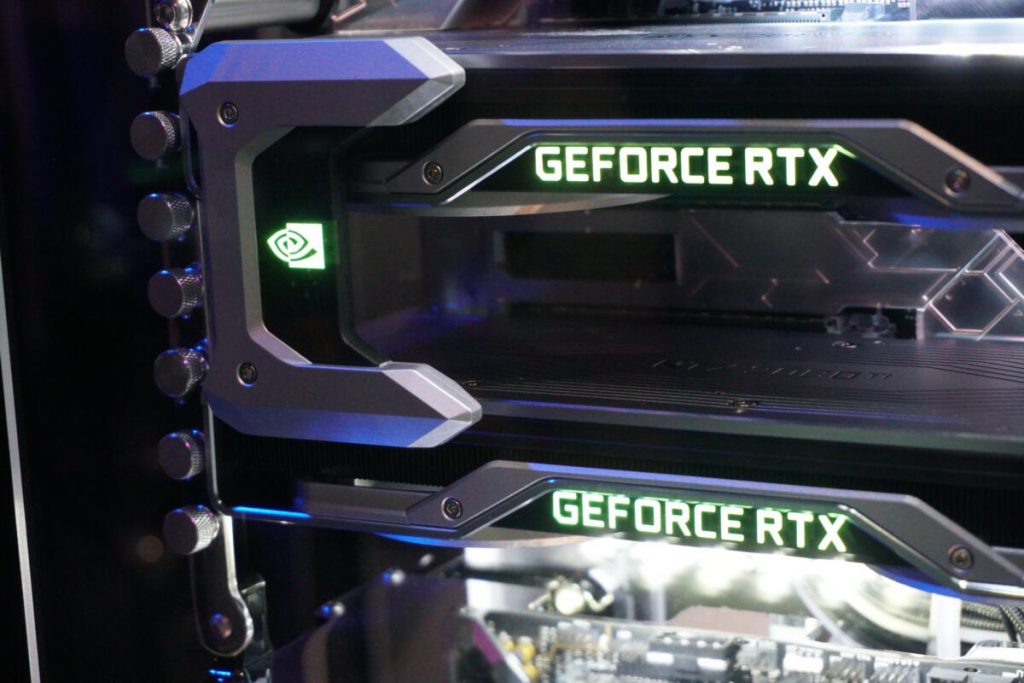 A glaring fact jumped out at me while I was sifting through Nvidia’s product pages for our GeForce RTX 30-series vs. RTX 20-series spec comparison: Only the monstrous $1,500 GeForce RTX 3090 includes support for NVLink, the proprietary connector that enables SLI mult-GPU configurations. Even the $800 GeForce RTX 3080 lacks it, and Nvidia calls that graphics card the 30-series flagship. (The RTX 3090 is a “BFGPU” above and beyond the rest.) Given that Nvidia controls 80 percent of the graphics card market, it seems clear that the days of slapping multiple graphics cards into your PC to boost frame rates is effectively over.

Update: Not even the RTX 3090 will support SLI. On September 17, Nvidia announced it “will no longer be adding new SLI driver profiles on RTX 20 Series and earlier GPUs starting on January 1st, 2021,” and RTX 30-series GPUs will not receive SLI profiles at all. Games that use DirectX 12 or Vulkan multi-GPU implementations will continue to work, but those are very few and far between. “Existing SLI driver profiles will continue to be tested and maintained for SLI-ready RTX 20 Series and earlier GPUs,” the company says, and SLI will continue to work for creative and professional apps.

Our original story continues below.

That said, it’s been effectively over for a while. Nvidia reduced SLI support to just two graphics cards during the GTX 10-series generation four long years ago. Rival AMD phased out CrossFire multi-GPU support for its Radeon GPUs soon after. But even that reduced support has stuttered in recent years, as graphics cards became powerful enough to drive 1440p and 4K displays by their lonesome.

Making matters worse, multi-GPU support has become increasingly wonky in games themselves over the years. Such setups were always a niche consisting of deep-pocketed enthusiasts, making it hard for developers to justify supporting SLI. SLI also slowly lost its reason for being, first because many games tied physics to frame rates, and inevitably because of the rise of ultra-powerful GPUs. Even if you invested in an SLI setup, it flat-out wouldn’t work in many of today’s games. In the ones that did support it, it didn’t work well—technically implementing it was always a nightmare for devs. Game developers can use DirectX 12 to implement multi-GPU without a connector, but it’s telling that virtually none of them have.

Well, almost, like I said. The GeForce RTX 3090 still supports it, but that’s because it’s the only card that still needs it to meet its intended use. Nvidia’s pitching this beast as the first-ever 8K-capable graphics card, and that’s with the company’s fantastic DLSS 2.0 technology enabled. Not many games support DLSS yet, and even the ones that do could still use more help to hit smooth frame rates at such a ludicrous resolution. If you thought pushing pixels at 4K resolution was rough, check out these Nvidia performance metrics at 8K:

An NVLink connection can also help with compute and content creation workloads for this pricey Titan-in-all-but-name.

So yeah, SLI isn’t technically dead, but it’s effectively dead for all but the top 0.1 percent of us. If you’ve got $3,000 to drop on a pair of RTX 3090s, by all means feel free to lord it over your geeky pals. Just don’t expect developers to spend much time making sure it works great in your games.

This story originally published on September 2, 2020, but was updated to mention Nvidia abandoning SLI profiles.