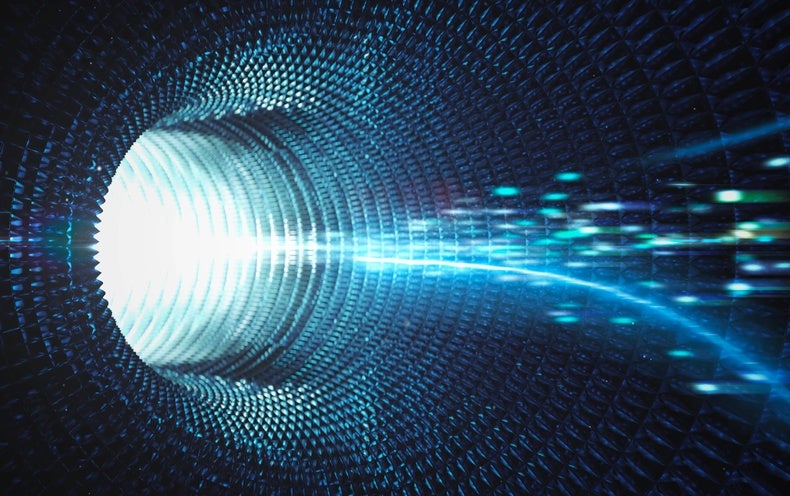 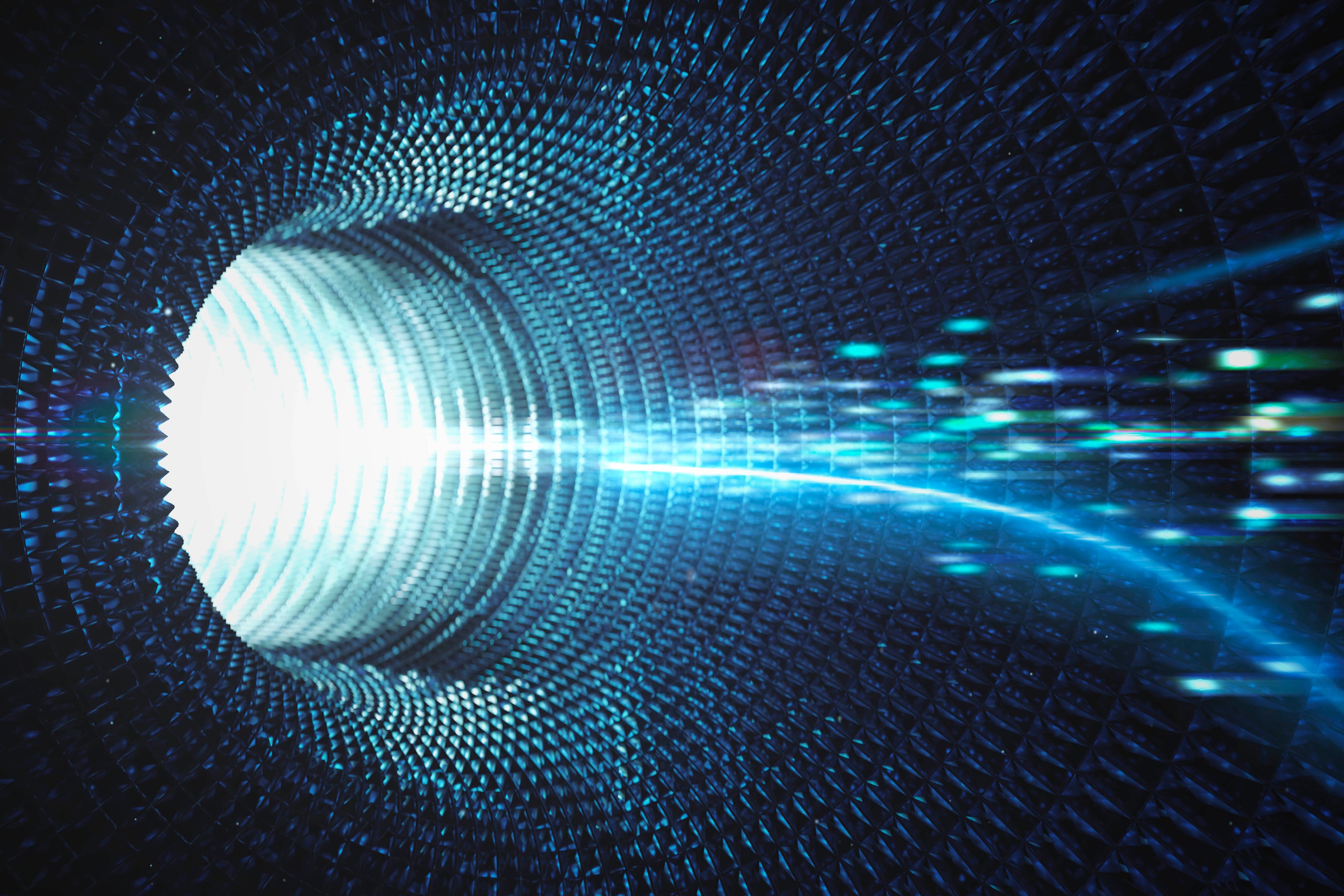 Although it would not get you past a brick wall and onto Platform 9¾ to catch the Hogwarts Express, quantum tunneling—in which a particle “tunnels” through a seemingly insurmountable barrier—remains a confounding, intuition-defying phenomenon. Now Toronto-based experimental physicists using rubidium atoms to study this effect have measured, for the first time, just how long these atoms spend in transit through a barrier. Their findings appeared in Nature on July 22.

The researchers have showed that quantum tunneling is not instantaneous—at least, in one way of thinking about the phenomenon—despite recent headlines that have suggested otherwise. “This is a beautiful experiment,” says Igor Litvinyuk of Griffith University in Australia, who works on quantum tunneling but was not part of this demonstration. “Just to do it is a heroic effort.”

To appreciate just how bizarre quantum tunneling is, consider a ball rolling on flat ground that encounters a small, rounded hillock. What happens next depends on the speed of the ball. Either it will reach the top and roll down the other side or it will climb partway uphill and slide back down, because it does not have enough energy to get over the top.

This situation, however, does not hold for particles in the quantum world. Even when a particle does not possess enough energy to go over the top of the hillock, sometimes it will still get to the opposite end. “It’s as though the particle dug a tunnel under the hill and appeared on the other side,” says study co-author Aephraim Steinberg of the University of Toronto.

Such weirdness is best understood by thinking of the particle in terms of its wave function, a mathematical representation of its quantum state. The wave function evolves and spreads. And its amplitude at any point in time and space lets you calculate the probability of finding the particle then and there—should you make a measurement. By definition, this probability can be nonzero in many places at once.

If the particle confronts an energy barrier, this encounter modifies the spread of the wave function, which starts to exponentially decay inside the barrier. Even so, some of it leaks through, and its amplitude does not go to zero on the barrier’s far side. Thus, there remains a finite probability, however small, of detecting the particle beyond the barrier.

Physicists have known about quantum tunneling since the late 1920s. Today the phenomenon is at the heart of devices such as tunneling diodes, scanning tunneling microscopes and superconducting qubits for quantum computing.

Ever since its discovery, experimentalists have strived for a clearer understanding of exactly what happens during tunneling. In 1993, for example, Steinberg, Paul Kwiat and Raymond Chiao, all then at the University of California, Berkeley, detected photons tunneling through an optical barrier (a special piece of glass that reflected 99 percent of the incident photons; 1 percent of them tunneled through). The tunneling photons arrived earlier, on average, than photons that traveled the exact same distance but were unimpeded by a barrier. The tunneling photons seemed to be traveling faster than the speed of light.

Careful analysis revealed that it was, mathematically speaking, the peak of the tunneling photons’ wave functions (the most likely place to find the particle) that was traveling at superluminal speed. The leading edges of the wave functions of both the unimpeded photon and the tunneling photon reach their detectors at the same time, however—so there is no violation of Einstein’s theories of relativity. “The peak of the wave function is allowed to be faster than light without information or energy traveling faster than light,” Steinberg says.

Last year Litvinyuk and his colleagues published results showing that when electrons in hydrogen atoms are confined by an external electric field that acts like a barrier, they occasionally tunnel through it. As the external field oscillates in intensity, so does the number of tunneling electrons, as predicted by theory. The team established that the time delay between when the barrier reaches its minimum and when the maximum number of electrons tunnel through was, at most, 1.8 attoseconds (1.8 x 10–18 second). Even light, which travels at about 300,000 kilometers per second, can only travel over three ten-billionths of a meter, or about the size of a single atom, in one attosecond. “[The time delay] could be zero, or it would be some zeptoseconds [10–21 second],” Litvinyuk says.

Some media reports controversially claimed that the Griffith University experiment had shown tunneling to be instantaneous. The confusion has a lot to do with theoretical definitions of tunneling time. The type of delay the team measured was certainly almost zero, but that result was not the same as saying the electron spends no time in the barrier. Litvinyuk and his colleagues had not examined that aspect of quantum tunneling.

Steinberg’s new experiment claims to do just that. His team has measured how long, on average, rubidium atoms spend inside a barrier before they tunnel through it. The time is of the order of a millisecond—nowhere close to instantaneous.

Steinberg and his colleagues started by cooling rubidium atoms down to about one nanokelvin before coaxing them with lasers to move slowly in a single direction. Then they blocked this path with another laser, creating an optical barrier that was about 1.3 microns thick. The trick was to measure how much time a particle spent in the barrier as it tunneled through.

To do so, the team built a version of a so-called Larmor clock using a complicated assemblage of lasers and magnetic fields to manipulate atomic state transitions. In principle, here is what happens: Imagine a particle whose spin points in a certain direction—think of it as a clock hand. The particle encounters a barrier, and inside it is a magnetic field that causes the clock hand to rotate. The longer the particle stays within the barrier, the more it interacts with the magnetic field, and the more the hand rotates. The amount of rotation is a measure of the time spent in the barrier.

Unfortunately, if the particle interacts with a strong enough magnetic field to correctly encode the elapsed time, its quantum state collapses. This collapse disrupts the tunneling process.

So Steinberg’s team resorted to a technique known as weak measurement: An ensemble of identically prepared rubidium atoms approaches the barrier. Inside the barrier, the atoms encounter, and barely interact with, a weak magnetic field. This weak interaction does not perturb the tunneling. But it causes each atom’s clock hand to move by an unpredictable amount, which can be measured once that atom exits the barrier. Take the average of the clock-hand positions of the ensemble, and you get a number that can be interpreted as representative of the correct value for a single atom—even though one can never do that kind of measurement for an individual atom. Based on such weak measurements, the researchers found that the atoms in their experiment were spending about 0.61 millisecond inside the barrier.

They also verified another strange prediction of quantum mechanics: the lower the energy, or slower the movement, of a tunneling particle, the less time it spends in the barrier. This result is counterintuitive, because in our everyday notion of how the world works, a slower particle would be expected to remain in the barrier for a longer stretch of time.

Litvinyuk is impressed by the measurements of the rotation of the clock hand. “I see no holes in this,” he says. But he remains cautious. “How, ultimately, it relates to the tunneling time is still up for interpretation,” he says.

Irfan Siddiqi, a quantum physicist at the University of California, Berkeley, is impressed by the technical sophistication of the experiment. “What we are witnessing now is quite amazing, in that we have the tools to test all of these philosophical musings [of] the last century,” he says.

Satya Sainadh Undurti, who was a member of Litvinyuk’s team and is now at Technion – Israel Institute of Technology in Haifa, agrees. “The Larmor clock is certainly the right way to go about asking tunneling time questions,” he says. The experimental set up in this paper is a clever and clean way to implement it.”

Steinberg admits that his team’s interpretation will be questioned by some quantum physicists, particularly those who think weak measurements are themselves suspect. Nevertheless, he thinks the experiment says something unequivocal about tunneling times. “If you use the right definitions, it’s not really instantaneous. It may be remarkably fast,” he says. “I think that’s still an important distinction.”